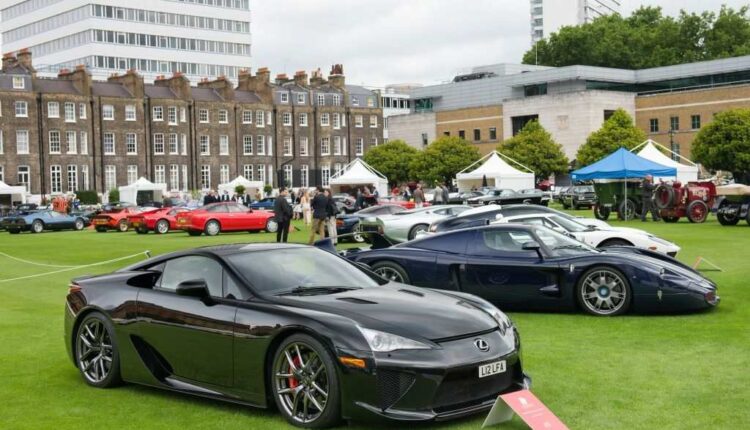 Japanese Jewels Set to Shine at London Concours in 2022

The London Concours, presented by Montres Breguet, has revealed the latest exciting class of this summer’s unmissable event: Japanese Jewels. Renowned for assembling the most stunning range of machinery, for 2022, the lawns of the Honourable Artillery Company will play host to the finest motor cars ever to emerge from Japan, a country revered by enthusiasts as a mecca of exquisite engineering and performance car passion.

Running from the 28th to the 30th of June, the London Concours will once again bring a brilliant array of cars to the heart of The City for three days of unparalleled automotive indulgence. Among the rare machinery on show will be the sports car representing the genesis of Japanese performance machinery, the delicate, much-coveted Toyota 2000GT.

The glamourous sporting coupe, produced between 1967 and 1970, redefined for many what Japanese cars could represent, adding performance and glamour to the existing reputation for engineering excellence.

The 2000GT packed a sweet, Yamaha fettled 2.0-litre 150 bhp straight-six with a lightweight body capable of 135 mph. It is perhaps most famous for its appearance in the James Bond film You Only Live Twice, with a unique convertible version created to accommodate the 6ft 2 Sean Connery.

With just 341 produced, the 2000GT has ascended to blue-chip collector car status, with examples changing hands for seven-figure sums.

This summer’s event will also feature arguably the most iconic Japanese performance car: the Nissan Skyline. Among the examples on show will be what is likely the most extreme incarnation: the R33 GT-R Nismo 400R. The 400R, even by limited run-Skyline standards, is an exceptional car.

Conceived to celebrate Nissan’s efforts at Le Mans in 1995 and 1996, the 400R packed the actual engine from the race car, the massively strong yet lightened ‘RBX-GT2’ twin-turbocharged 2.8-litre straight-six.

Nissan threw caution to the wind when it came to the ‘gentleman’s agreement’ between Japanese manufacturers that stipulated road cars could only have 276 bhp; the 400R packed a full 400 bhp and revved to a 9000 rpm redline.

Only 40 were built; they now rank among the most sought after and valuable modern classics – Japanese and otherwise. June’s show will offer a rare chance to pore over the details of this scarce, exceptional motor car.

The HAC will welcome another GT-R of great repute, the R34 V-Spec II Nur. Just 718 of these limited-run specials were built, arriving right at the end of R34 production in 2002.

A fitting finale for the 5th generation of the GT-R, the Nur packed significant mechanical upgrades, with an uprated ‘N1’ version of the RB26 motor – a variant optimised for racing – with a reinforced block, motorsport pistons and a pair of larger turbos.

Nissan claimed the Nur’s tweaked motor put out 330 bhp – but considering it needed limiting to 186 mph, one suspects it might have packed more of a punch in reality. June’s event will give a chance to witness this ultra-rare model, a final flourish for analogue GT-Rs.

The show will also feature a supercar that redefined the public’s perception of Japanese performance cars: Honda’s NSX-R, which took the fight to the established European supercar players of the millennium.

Building on the enthralling platform of the standard NSX, the ‘R’ sported a highly-strung version of the VTEC V6 that revved with infectious vigour to 9000 rpm. Japan’s answer to the 911 GT3 produced a claimed 276 bhp – conveniently bang on the gentleman’s agreement’s power limit.

The NSX-R was outgunned on paper by its rivals from Italy and Germany but countered with extensive lightweighting. Air conditioning was discarded, and much of the sound deadening while figure-hugging Kevlar Recaro bucket seats replaced the standard electronically adjustable leather items.

The resulting car had sensational handling, synaptic responses, a spine-tingling soundtrack, and arguably the most remarkable manual gear change.

It also had a stunning on-track pace; the NSX-R matched the 100 bhp more powerful Ferrari 360 Challenge Stradale’s Nürburgring lap time of 7:56. Don’t miss the chance to savour one of the classic modern performance cars.

The immaculate lawns of the HAC will also play host to a supercar that can be viewed as a spiritual successor to the NSX-R, the Lexus LFA, which once again elevated Japanese performance cars into uncharted territory.

The LFA, with its spellbinding 560bhp 4.8-litre V10 – co-developed with Yamaha – and total engineering focus, ranks among the most exceptional cars of all. In production between 2010 and 2012, only 500 LFAs left Toyota’s Motomatchi plant, all hand-built by specialist engineers.

The LFA was only offered for sale through a solitary dealership in Europe – Lexus’ dealership on London’s Park Lane. Retailing at £340,000, Lexus struggled to sell the LFA and – after a dizzyingly costly and protracted 10-year development programme – they made a loss on each one they did. However, those who took the plunge on this stunning supercar were richly rewarded.

A confident Jeremy Clarkson commented: “if someone were to offer me a choice of any car that’s ever been made, I would take a dark blue LFA.” Another not to be missed.

Japanese performance icons with rallying roots will also be on display this June, firstly in the form of the Subaru Impreza. One half of Japan’s 90s all-wheel-drive turbocharged duopoly that dominated on special stages and B-roads alike, the Impreza also stole the hearts of a younger generation on the virtual racetracks of Gran Turismo.

The 22B STi variant, created to commemorate Subaru’s 40th anniversary and their 3rd consecutive WRC title, will be shown this June.

The 22B is the ultimate incarnation of the Impreza – with its exotic 2-door body shape and irresistible flared arches, housing equally alluring BBS wheels – finished, of course, in the iconic Subaru gold. Making 276 bhp – officially – from its 2.2-litre flat-four, the 22B weighed just 1270 kg, despite packing an advanced all-wheel-drive system, and was capable of 0-60 mph in 5.0 seconds flat.

Just 400 of these uber-desirable roadgoing rally specials were produced, and prices have skyrocketed in line with their exalted status – 22Bs now regularly fetch sums in the mid-six-figure range at auction.

The lawns of the HAC will also welcome the most iconic version of Impreza’s chief rival – Mitsubishi’s Lancer Evolution XI Tommi Mäkinen Edition. Built to commemorate the Flying Finn’s fourth WRC title in 1999, the Evo XI ‘TME’ was the first Evo officially imported to the UK, sold via Mitsubishi’s Ralliart division.

These Japanese jewels, and many more, will be on display at the Honourable Artillery Company this summer, at the capital’s ultimate automotive extravaganza. Further exciting class announcements will follow in the coming weeks and months as we build towards the 6th edition of our unmissable event.

“Guests to the Honourable Artillery Company will be treated to an unprecedented array of cars, a decadent range of food and drink options and a carefully curated line-up of luxury brands and boutiques. London Concours 2022 is set to be another occasion of total automotive indulgence.”