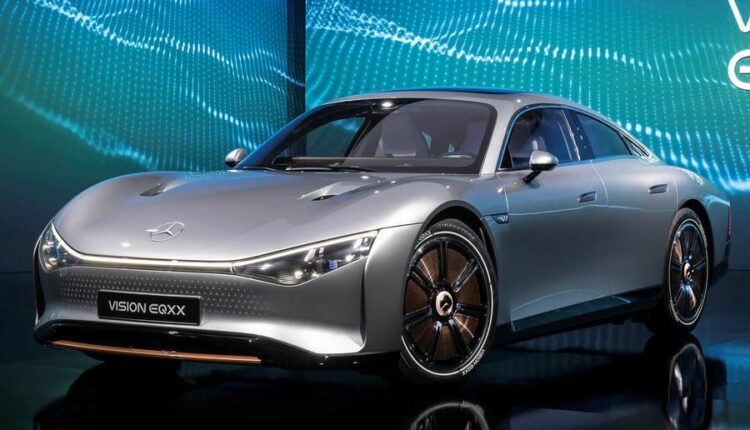 The sleek, compact sedan is the latest in a long line of design studies released by Mercedes-Benz. It has been designed to challenge existing EV principles as part of a programme to develop new ideas, processes and innovations for upcoming EVs.

Asked what would stop Mercedes from putting the radical concept iConceptduction itself, Markus Schaefer, chief technology officer, told Autos Community: “Basically not much. In a few months, you can take it for a spin.”

Schaefer pointed out that the concept iConceptving prototype even uses a version of the existing MBUX infotainment system. It is a prototype of Mercedes-Benz’s next-generation electric drive system with innovative battery technology that will go into production in 2024.

“There are many, many elements of the vehicle that are close to series production,” he added. “We can look at the shape of the vehicle, and we are very close to the production vehicle that we will see in 2024, with all the ingredients that will make it one of the most efficient electric vehicles available.”

Chief designer Gordon Wagener confirmed that the EQXX is “at least one segment smaller” than the recently revealed EQE, hinting at its possible production potential as an electric equivalent to the C-Class, previously reported by Autos Community, and likely to be based on the all-new MMA platform for compact and mid-sized electric vehicles.

Although the EQXX complies with all current German road traffic regulations and offers space for four adults, it sets a new record for aerodynamic efficiency with a drag coefficient of less than 0.18 CW. In comparison, the drag of the EQS is 0.20 cd. 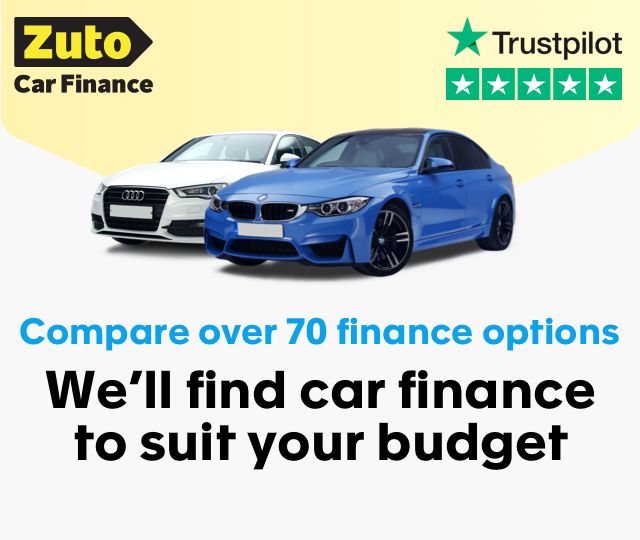 The development programme for the EQXX is said to have involved the British company Mercedes-AMG High-Performance Powertrains, which builds the complex V6 turbo-hybrid powertrains for Mercedes’ Formula 1 cars.

In developing the one-off prototype, Mercedes focused on the powertrain and challenged its designers and engineers to rethink other vital areas of EV development.

Crucial to the rear-wheel-drive sedan’s outstanding range is its high efficiency, which at more than 6.2 miles per kWh is almost double that of the Mercedes-Benz EQS under the WLTP test procedure – a figure Mercedes says is equivalent to more than 282 km per hour for a petrol vehicle. 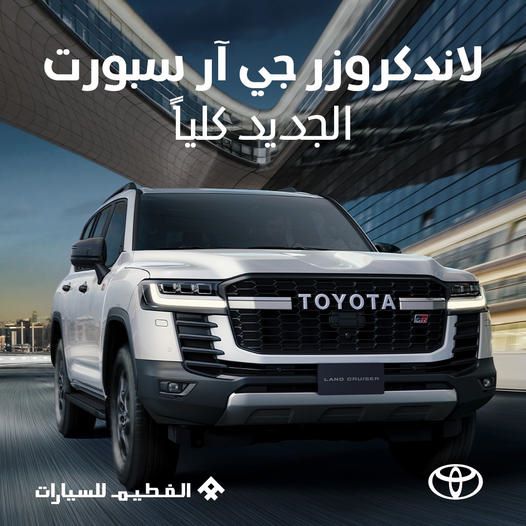 This was achieved by a newly developed engine and a customised lithium-ion battery that, at just under 100 kWh, has a lower total energy capacity than the EQS – whose long-distance version manages 453 miles.

Mercedes said the new high-silicon battery operates at more than 900 volts and features “active cell balancing” – a process that draws energy evenly from each cell to improve efficiency while driving.

Other developments include a new thermal system that delivers significant energy savings by using heat from the drivetrain to heat the cabin, while a panel under the car uses airflow along the underbody to cool it. 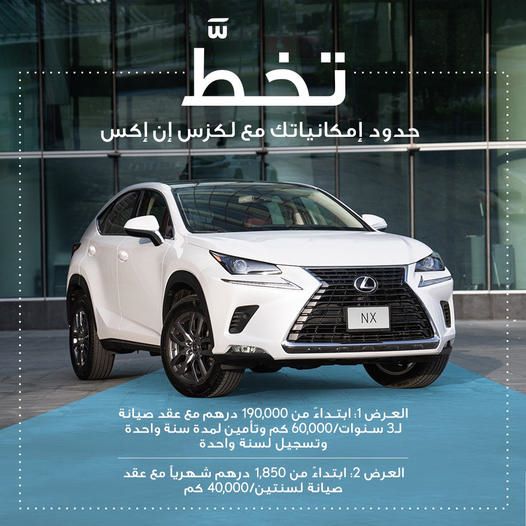 Mercedes claims that up to 95% of the energy from the EQXX’s battery arrives at the wheels. By comparison, vehicles from ICE typically operate at around 30% efficiency.

The EQXX’s compact new 201 hp engine is housed in a lightweight carbon-fibre subframe at the rear and is driven by a single-speed gearbox.

It is controlled by a power electronics system that borrows heavily from that used in the Mercedes-AMG One hybrid, but with a new generation of silicon carbides, which Mercedes says results in a significant reduction in losses compared to the systems now used in models designated EQ.

“Electric range sounds simple, but it is a complex technical challenge,” said Joerg Bartels, head of the EQXX engineering team. “The simplest way is to install a larger battery in the car, and however, this leads to diminishing returns due to the size and weight. With the Vision EQXX, we have managed to take efficiency to a new level.”

The front of the EQXX has a sports car-like appearance with a low leading edge, short bonnet, shapely wings and prominent wheel arches. The characteristic Mercedes radiator grille has been replaced by a star graphic integrated into the front bumper, while the digital LED headlights are connected by a full-width LED light bar.

The Mercedes star logo is embossed into the bonnet to save weight and ensure maximum aerodynamic efficiency. A so-called ‘Air Control System‘ channels air through the front end of the new concept car using a series of air curtains and vents. 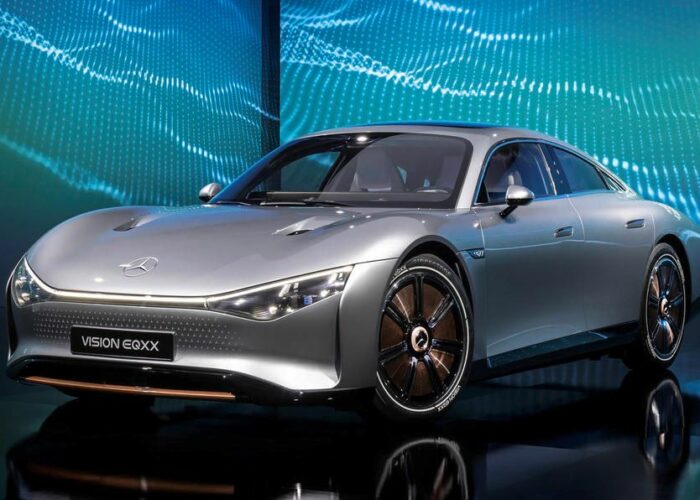 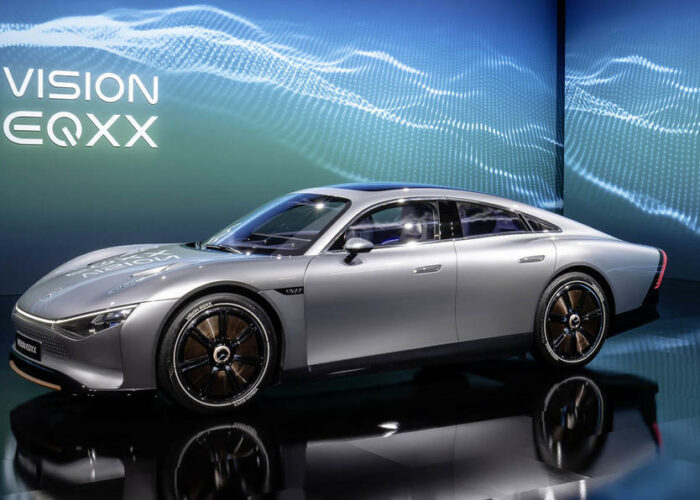 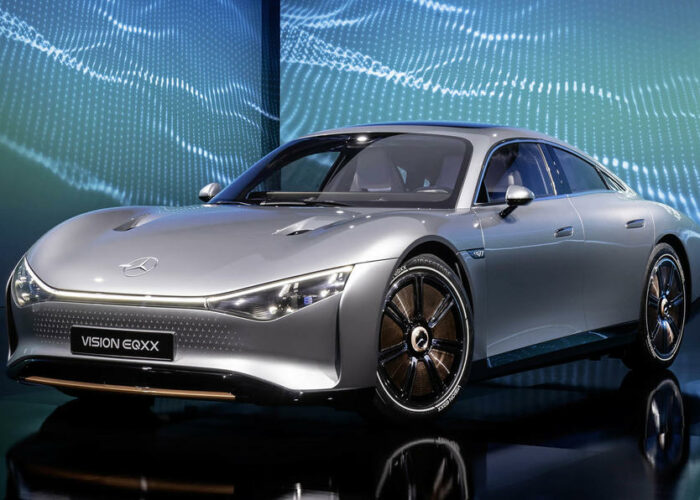 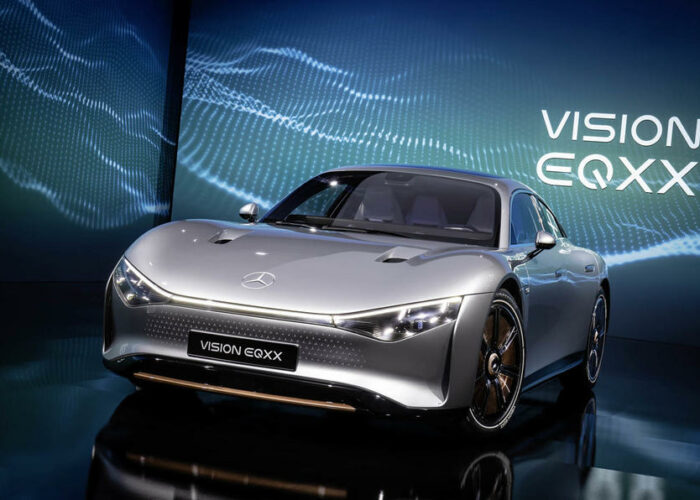 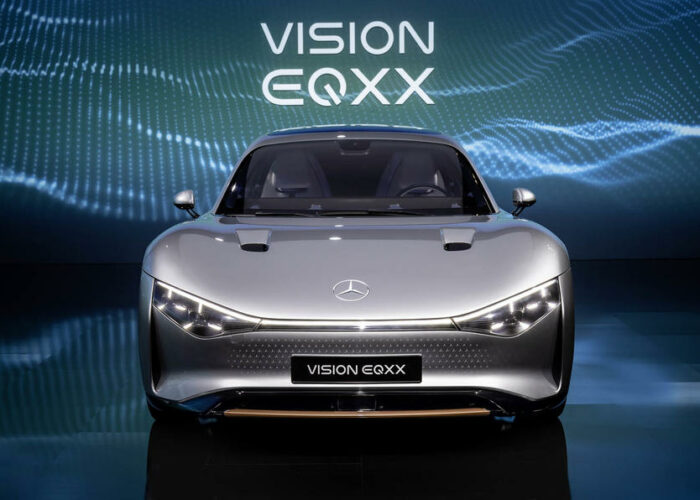 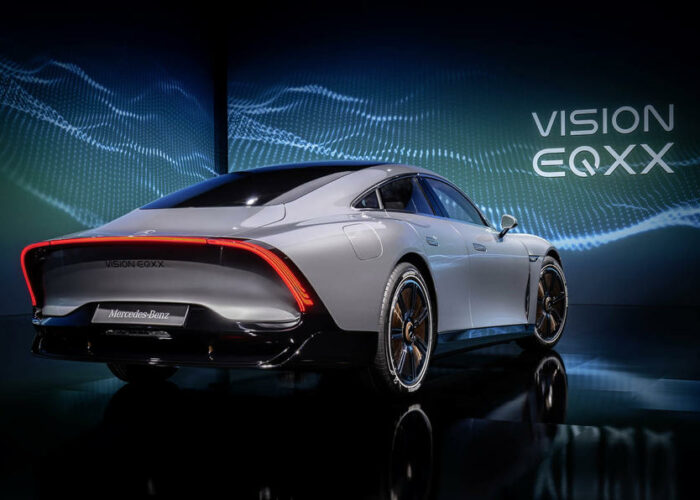 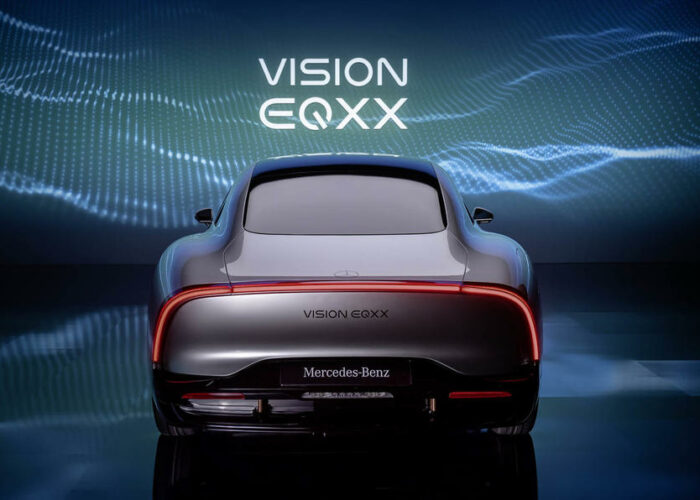 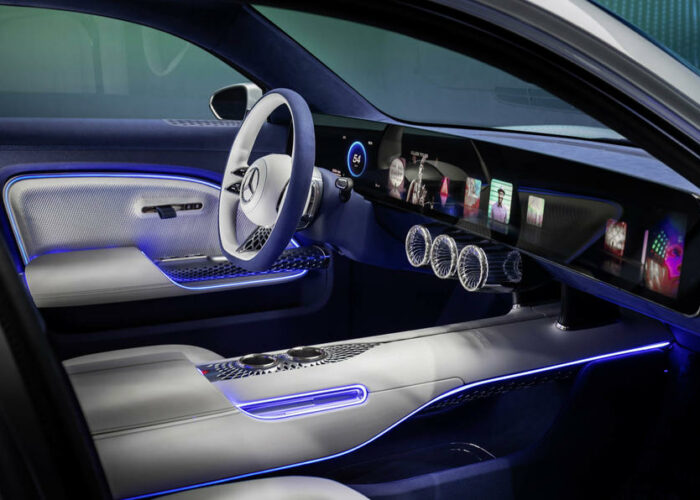 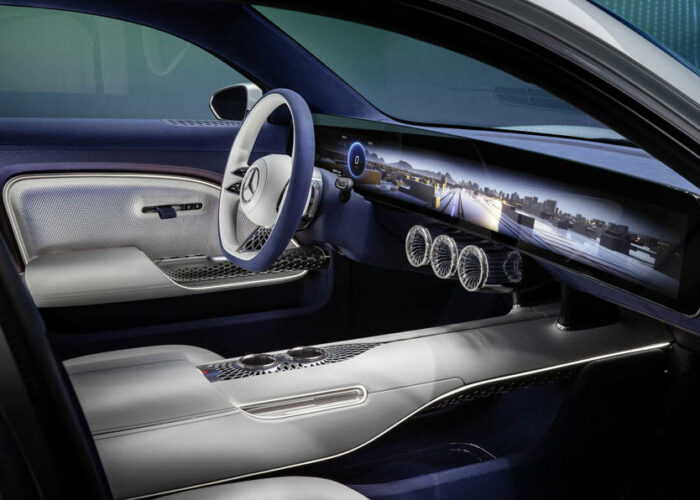 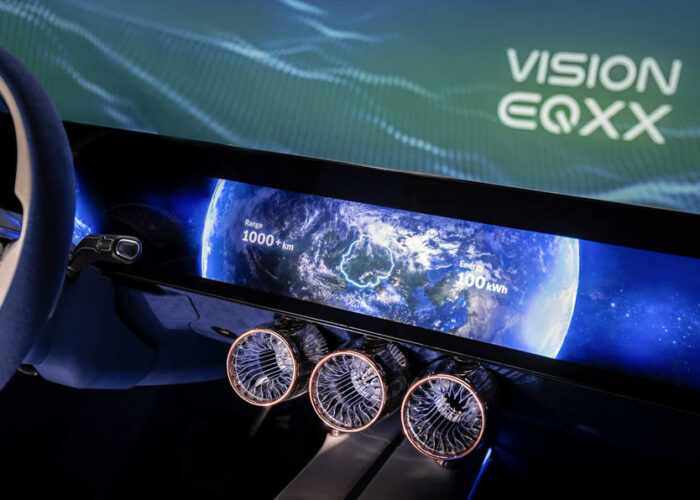 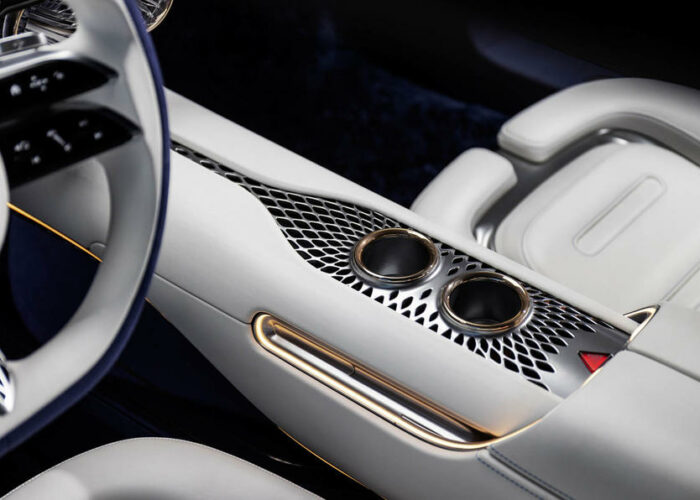 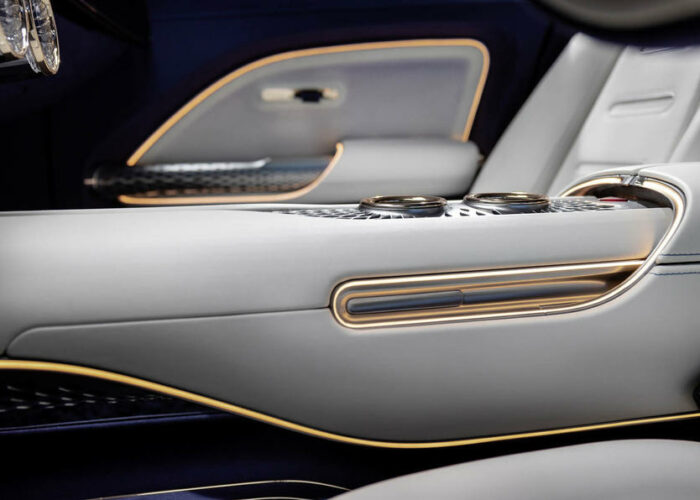 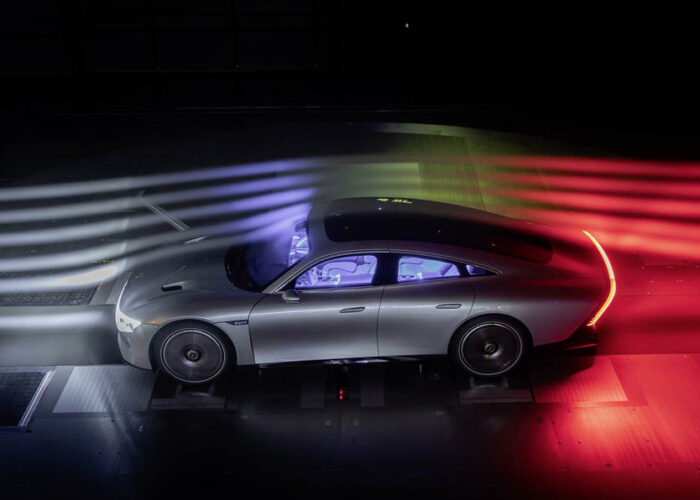 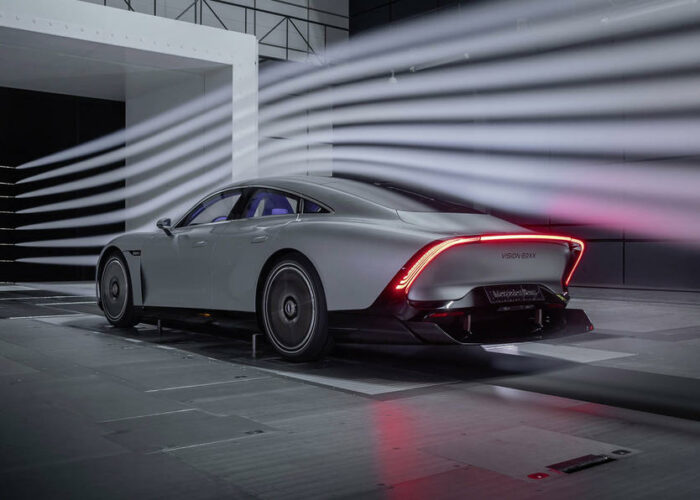 The A-pillars of the EQXX are set far forward, as there are no powertrain components in the nose area. The wheelbase is 2800 mm, which maximises interior space.

At the rear, the EQXX draws on the active aerodynamic developments first trialled by Mercedes in the Concept IConcept015. These include a diffuser element that automatically extends at speed to smooth the airflow and reduce turbulence.

The EQXX is also slightly tapered, with a rear track that is 50 mm narrower than the front track.