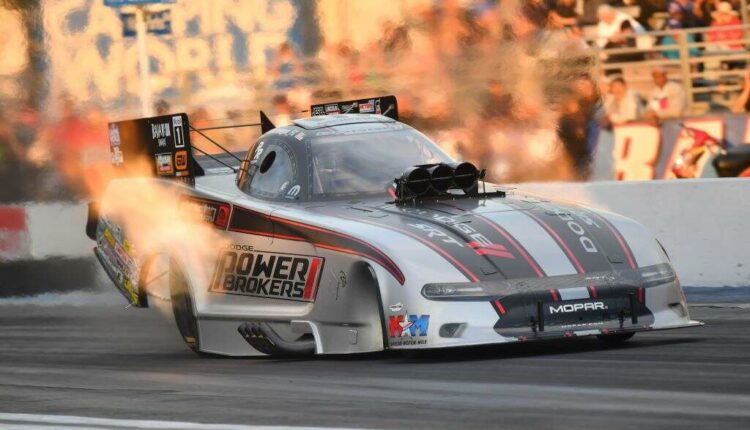 Race day at the 57th annual Auto Club National Hot Rod Association (NHRA) Finals may offer up an exhilarating end to Tony Stewart Racing’s (TSR) first season in drag racing competition as Matt Hagan qualified his Dodge Power Brokers Funny Car No. 3 for eliminations and, with three win lights and a little luck, could end up battling for a Wally trophy and the 2022 NHRA World Championship in the final round of the season.

Plenty of scenarios could play out on race day for the points-and-a-half finale at the legendary Auto Club Raceway at Pomona, but should current class leader Robert Hight falter in the first two rounds. At the same time, the Dodge Power Brokers Funny Car drives to a final elimination appearance, and the world championship title for Hagan and TSR remains a possibility.

The three-time Funny Car World Champion’s best run of the weekend came in Friday’s second session with a 3.844-second elapsed time run at 323.58 mph to put him third on the elimination ladder and earn four of his five total qualifying bonus points. While he wasn’t able to amass enough extra points to put him within two rounds (or less than 60 points) of Hight as No. 1 Qualifier Capps (57 points behind) had done, the good news is that both of Hagan’s opponents are on the opposite side of the eliminations ladder, giving the Dodge Charger SRT Hellcat driver a chance to contend for the crown by advancing to the final round.

This is the fourth consecutive year Hagan heads into the last race of the season as a title contender. He’ll begin his drive against No. 14 seed Steven Densham.

Two-time Funny Car world champion Cruz Pedregon earned the No. 2 Qualifier position for the last race of the 2022 season aboard his Snap-on Tools Dodge Charger SRT Hellcat after putting together the best qualifying performance of his career with four of the quickest passes he has ever run, all of which were in the 3.84-second range. Pedregon ran a career-best 3.840-second run at 322.58 mph with his first lap of the weekend to put himself in the provisional No. 1 Qualifier position on Friday and had three more great consistent runs that put him first or second in each of the remaining sessions to collect a total of 14 bonus points.

Unfortunately, Pedregon was dislodged from the top spot by Capps in their final qualifying run. Pedregon will have No. 15 seed Jason Rupert as his opening-round opponent.

TSR Top Fuel pilot Leah Pruett will go into the last race day of the year as the No. 4 qualifier after wheeling her Dodge Power Brokers dragster to their best elapsed time run of the season with a 3.669 second/329.67 mph effort in Friday’s second session. That run put her provisionally third heading into Saturday qualifying, where she added two more solid passes but could not improve her starting position in a tight Top Fuel field. Pruett will line up next to No. 12 seed Alex Laughlin in the opening round as she works towards earning her second Wally trophy of the year.

The NHRA Finals, the last of six NHRA “Countdown to the Championship” playoff events, will air on FS1 with a recap of qualifying on Sunday, Nov. 13, at 2 p.m. ET and race coverage beginning at 4 p.m. ET to conclude with the crowning of 2022 NHRA World Champions.