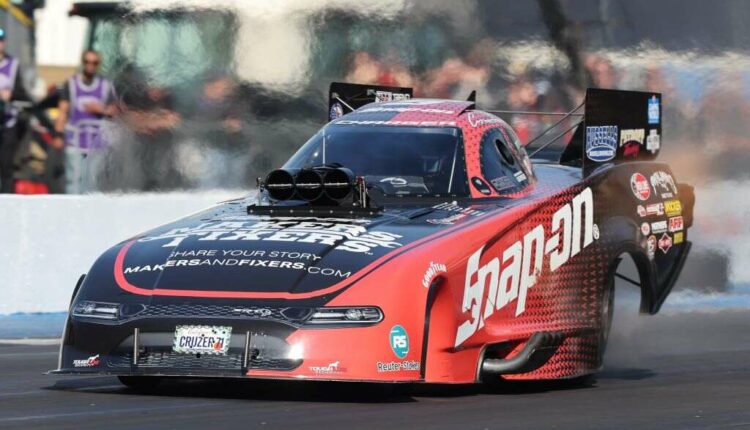 In their first year competing in the National Hot Rod Association (NHRA) Camping World Drag Racing Series, Tony Stewart Racing (TSR), with driver Matt Hagan at the wheel of his Dodge Power Brokers Funny Car, were a championship-contending team from the start of the season to this weekend’s 57th annual Auto Club NHRA Finals.

Hitting the dragstrip with wins in three of the first eight national events, Hagan led the category through June, then took his Dodge Charger SRT Hellcat into the NHRA’s “Countdown to the Championship” six-event playoff series, where he proceeded to drive to three semifinal performances, a runner-up finish, and the team’s fourth win of the season.

Hagan qualified third for the season finale with the slim possibility of sneaking past fellow championship contenders Robert Hight and Ron Capps in the points by wheeling his Dodge Power Brokers Charger SRT Hellcat to a final elimination appearance.

In the opening round, Hagan had the quicker start against No. 14 seed Steven Densham but suddenly lost traction early in the run. While Hagan tried to regain control, his opponent continued past to take the round win and ultimately ended his hopes of battling for a fourth-world title.

After a runner-up finishes in the championship to Capps last year and his third world title win in 2020, Hagan closes out the 2022 season among the top three in the Funny Car standings for a fourth straight year marking the tenth consecutive season with at least three wins.

Fellow Dodge Charger SRT Hellcat Funny Car driver Cruz Pedregon followed up a career-best performance in qualifying that put him in the No. 2 spot for eliminations at Auto Club Raceway with another impressive drive on race day to earn his team’s first win of the season.

The Cruz Pedregon Racing team provided their owner and driver with a HEMI®-powered racecar that ran all eight weekend passes in the low three-eighty (second) range. Pedregon eliminated Jason Rupert, John Force, and Alexis DeJoria to advance to his first final round of the season before facing off against No. 1 Qualifier and defending world champ Capps who had already passed Hight in the points to claim his second world title unofficially.

The two lined up and launched within 0.001-seconds of each other for an exciting side-by-side battle in which Pedregon recorded a career-best 3.839-second run along with his fastest career speed at 335.65 mph to earn his 39th Funny Car win. Pedregon and his Snap-on Tools Dodge Charger SRT Hellcat wrap up the season sixth in the championship standings.

In the Top Fuel competition, TSR’s Leah Pruett came into race day and qualified fourth after recording her best elapsed time run of the season aboard her 11-thousand-horsepower Dodge Power Brokers dragster. After earning her team’s first Top Fuel win in July at the Dodge Power Brokers Mile-High Nationals in Denver, Pruett hoped to end their first season with another memorable performance for the highlight reel.

Her opening round against No. 12 seed Alex Laughlin added a bit of drama to the day after she launched first and had a good lead when both competitors hazed their tires and had to pedal their rides. As Pruett attempted to regain traction, a booming fireball engulfed her dragster as momentum carried her to the finish line first to turn on the win light.

Pruett’s crew regrouped quickly and rebuilt the 11-thousand horsepower Dodge Power Brokers dragster for their quarterfinal challenge against No. 5 seed Austin Prock. Pruett moved first against Prock with a stout 0.044-second reaction time to send her down the strip, and a solid 3.721 sec./324.20 mph effort against her opponent’s winning 3.704 sec./329.18 mph pass en route to his event win. Pruett and her crew end up 11th in the Top Fuel standings, 301 points behind champion Brittany Force.