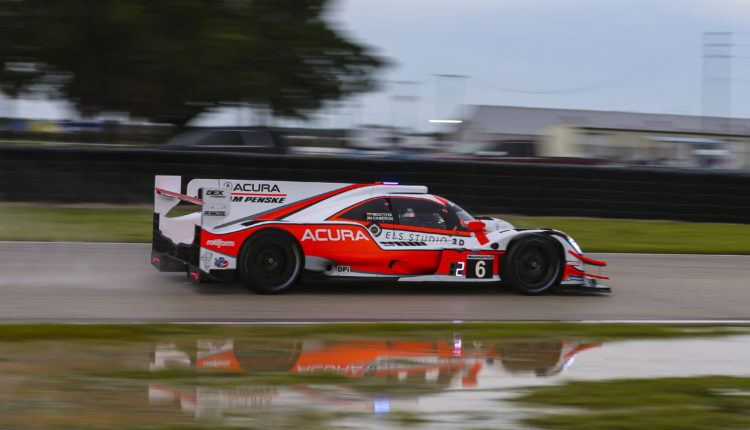 In the premier Daytona Prototype International category, Juan Pablo Montoya qualified second, just two-tenths of a second off the pole time in his #6 Acura ARX-05, while teammate Helio Castroneves started his ARX-05 from sixth.

However, both Acura Team Penske entries required four stops for fuel during the two-hour, 40-minute contest, one more pit stop than most of their competitors.  After running fourth in the early laps, then moving up to third, Montoya handed over the #6 Acura to co-driver Dane Cameron mid-race, who soldiered on to a sixth-place finish.

As the race approached the 30-minute mark, Castroneves was forced to pit his #7 ARX-04 when a turbocharger fitting worked loose on the notoriously bumpy Sebring circuit but was able to regain the lead lap due to a timely full-course caution. Ricky Taylor took over the driving duties with just over an hour remaining and brought his car home seventh.

In the always-competitive GTD category, the Gradient Racing duo of Marc Miller and Till Bechtolscheimer demonstrated continued improvement with their Acura NSX GT3 Evo, combining for a seventh-place finish at Sebring, after running 10th in the team’s 2020 debut two weeks earlier at Daytona.

Starting eight in class, IMSA rookie Bechtolsheimer gained a position during the opening lap and ran as high as fifth in a consistent first stint.  Veteran Miller took over the driving duties at the first pit stop, resuming in eighth place, then gaining one position for a seventh-place finish.

This weekend’s race at Sebring is part of the Sprint Cup Championship, for shorter races on the 2020 schedule, and is not part of the overall WeatherTech SpotsCar Championship.  As a result, the two-car Meyer Shank team of Acura NSX GT3 Evo’s were not present, but both will return for the next round at Road America.

Chevrolet Introduced the First-Ever SUV Nearly a Hundred Years Ago, and Since Then, It Has Only Gotten Bigger and Better