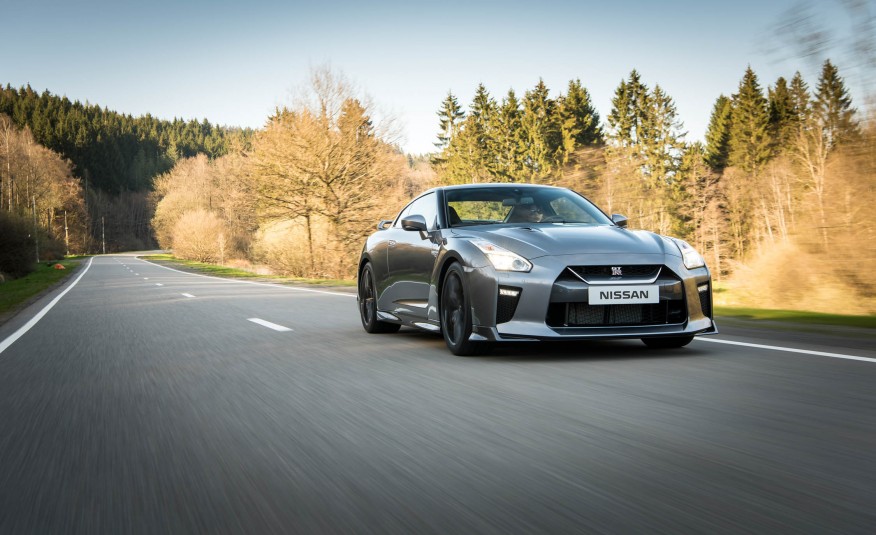 For the source of the Nissan GT-R’s bad-boy nickname, look to Honda—Ishirō Honda. In 1954, that Japanese film director conceived Gojira, the monster born of World War II nuclear radiation that we know as Godzilla.

After this icon wreaked havoc in 30 films, the name was a natural fit for Nissan’s sports coupe, which evolved through six generations before arriving here as the 2009 GT-R. Now the seventh generation is about to face that nicer road monster of Honda’s making: the new Acura NSX.

Godzilla Gets a Makeover

Godzilla is a cute nickname, but Nissan’s intentions are more clearly revealed by this car’s three-letter ID bracelet. This is the GT coupe itching for track laps, the racer you can comfortably live with on the road. Now that the $100,000 class is thick with supremely capable sports cars, Nissan has had to raise its hero’s game. It’s calling the revised 2017 model the seventh generation, but much of the core GT-R carries over, so we’d say this is more of a makeover than a full redo.

Thanks to additional boost pressure, the 3.8-liter twin-turbo V-6 now delivers 565 horsepower at 6800 rpm and 467 lb-ft of torque at 3300 rpm, increases of 20 horsepower and 4 lb-ft. A new titanium exhaust system sheds 12 pounds and is tuned for less noise in daily use. Subtle changes to the six-speed dual-clutch automatic transaxle are also aimed at improved drivability. 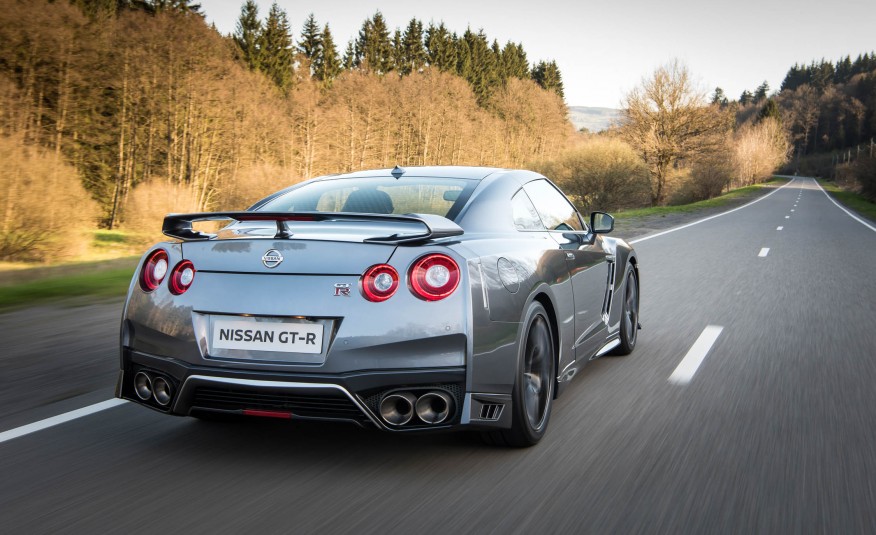 Structural refinements at the front and rear of the unibody raise torsional rigidity 5 percent, resulting in better handling and stability. The Bilstein dampers are both more supple and more adjustable through Normal, Comfort, and R (guess what that stands for) settings. Shift firmness and stability-control characteristics also are easily adjustable via console buttons.

The exterior design is still a mix of funk and function. Updates include a new grille that delivers additional cooling air to the engine, a hood that’s 30 percent stiffer to avoid deflecting at high speed, and a more effective chin spoiler. Horizontal sill plates and a delicately recontoured C-pillar diminish turbulence down the sides and over the back of the body. A vertical corner fence borrowed from the previous NISMO GT-R and a more effective rear diffuser also improve aerodynamic performance. 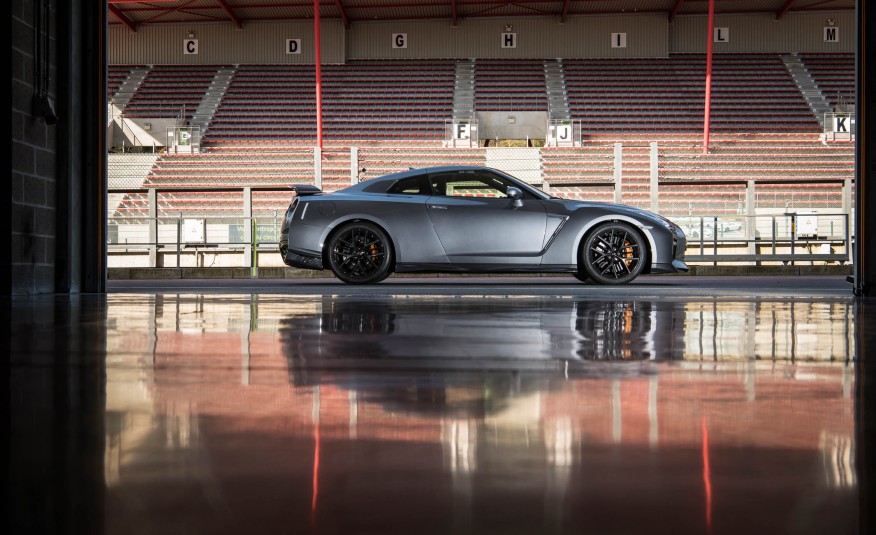 The 20-inch forged-aluminum wheels are a fresh design, there’s a cockpit-controlled valve to provide the option of corking the left exhaust outlets for quieter operation for a few seconds after engine start, and ultrasonic front and rear parking sensors are new.

Inside, shift paddles move from the column to the steering wheel, the seatbacks now wrap the driver’s torso, and there’s a new 8.0-inch touchscreen with triple control redundancy (touchpoints on the screen, buttons adjacent to the display, and a console-mounted controller). Even so, the switch count is reduced from 27 to 11 despite the addition of a few new functions. 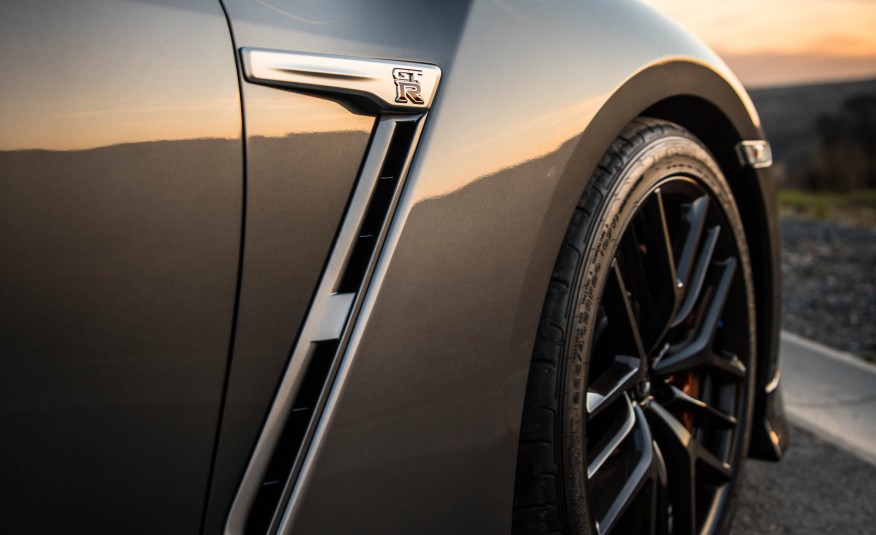 Attributes that won the hearts and twisted the minds of the PlayStation generation continue—an instrument cluster that adjusts vertically with the steering column, a center-stack gauge array that reports every pertinent piece of operating data save your heart rate, and a dual-clutch automatic transmission that never misses a shift or a rev match.

Another carryover is sterling performance resulting from 20 more horses towing only 11 more pounds of curb weight. Combine those stats with excellent traction, and GT-R 7.0 is sure to smash the 3.0-second zero-to-60-mph barrier. It certainly felt that way during our two-day attack on European civility from Dusseldorf, Germany, to Spa-Francorchamps in Belgium and back again. 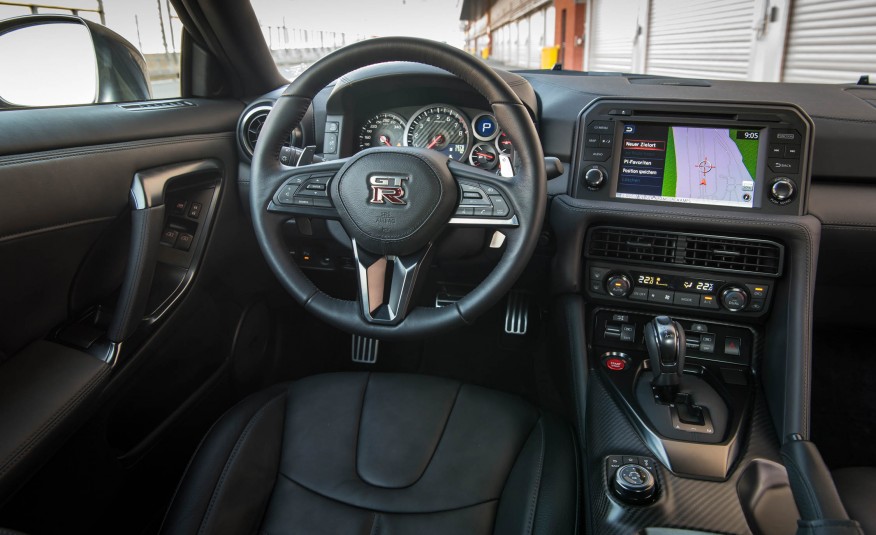 While it resembles the beast of before, what we found inside the GT-R was a whole ’nother animal. It’s as if Godzilla had gone vegan, taken up yoga, and lost his lust for mayhem. He still kicks with a vengeance, but some hidden charm has emerged.

The GT-R no longer beats you mercilessly on a long, hard drive. The soundtrack is pure engine music—more growl, less howl—thanks to Bose noise cancellation and enhancement technology and to an acoustic barrier in the windshield that trims the din by 10 decibels. Led by Nissan chief product specialist Hiroshi Tamura, the GT-R team polished away many rough edges to help this car sparkle in ways that will astound its loyal following. 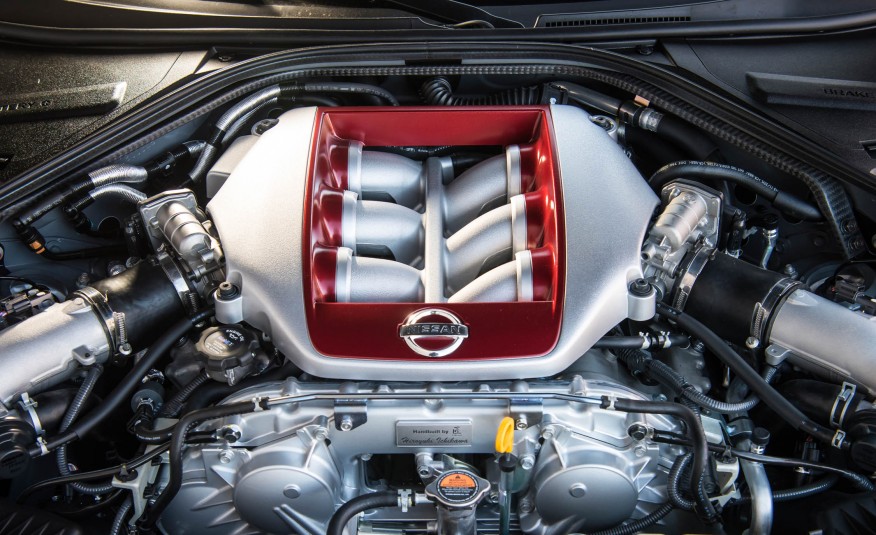 Lapping the legendary Spa Formula 1 course in horribly wet, no-visibility conditions is a tall order for any sports car, but it was a challenge the new GT-R embraced with pride. The 565 horsepower and the twin-turbo torque easily overwhelmed the available traction, but as long as throttle applications were deliberate, it was possible to hold the (wet) racing line without the front end washing out. At the cornering limit, the whole car slid wide until the rear tires finally lost their grab with a ratchet-chatter advisory that enough is enough. Although the hydraulically assisted steering provided no feedback in the wet and little in the dry, its quick off-center response was perfect for charging aggressively up the fabled Eau Rouge corner combo.

Cobblestone streets in some of the small villages drove us occasionally to the dampers’ Comfort setting. That tuneability took the edge off the long-haul stress and left us primed and ready for runs toward the GT-R’s 195-mph limit. Taking advantage of well-maintained thoroughfares through the Ardennes forest and breaks in truck traffic, we twisted the tach to 6000 rpm and the speedometer to an indicated 275 km/h (171 mph). Whistling along at near bullet speeds is a breeze in the GT-R because Tamura-san and crew took the trouble to perfect this car’s on-center steering and aerodynamic stability. Nissan has the capacity to build approximately 5000 GT-Rs per annum. Like Porsche’s 911, its blueprint has a few flaws, but persistent refinement has minimized the evil traits. This car’s combination of spectacular all-wheel-drive performance and back seats perfect for preteens graduating from virtual racing to the real thing is what helped it win over more than 1100 buyers in its eighth year in the U.S. market. When the 2017 model arrives this July with a $111,585 base price, the smart fans will be back for more.