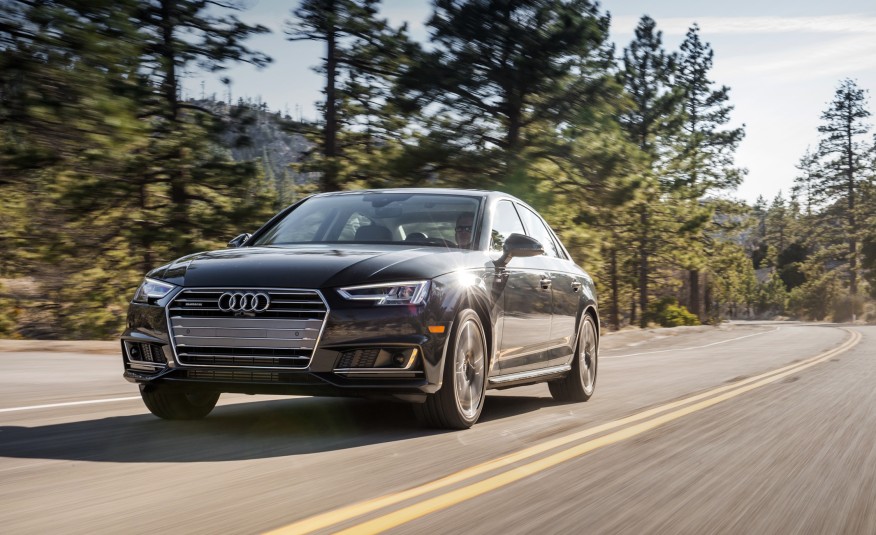 Silence is golden, especially in an election year. But in a sports sedan, silence can be eerie. Absent the sound of hot air ripping through an exhaust, can you really be sure you’re in a car that performs?

In the case of the 2017 Audi A4 2.0T Quattro, the sound-level meter confirms its soft-spoken nature. At a steady 70 mph, the A4 puts out a mere 63 decibels. That’s less noise than you’ll get in an S-class, Audi’s A8, and the sensory-deprivation tank also known as the Lexus LS600hL. A Rolls-Royce Phantom is quieter, but only by one decibel. Point the A4 down a highway and all you hear is a light ruffling of wind—and watch your speed, the A4 is barely louder at 100 mph.

Some of the credit for the silence has to go to the new A4’s low, 0.27 drag coefficient. But it isn’t just the wind that barely notices the new sheet metal; people’s gazes will slip right off it as well. The design, a modest evolution of the old A4, isn’t exactly eye-catching. But that doesn’t mean there’s a bad line on the car. Indeed, there is a great line, a crease that runs along the side and into the shut-line of the clamshell hood. At the tail end, Audi has finally figured out how to get its thin band of sweeping LED turn signals past U.S. regulators. 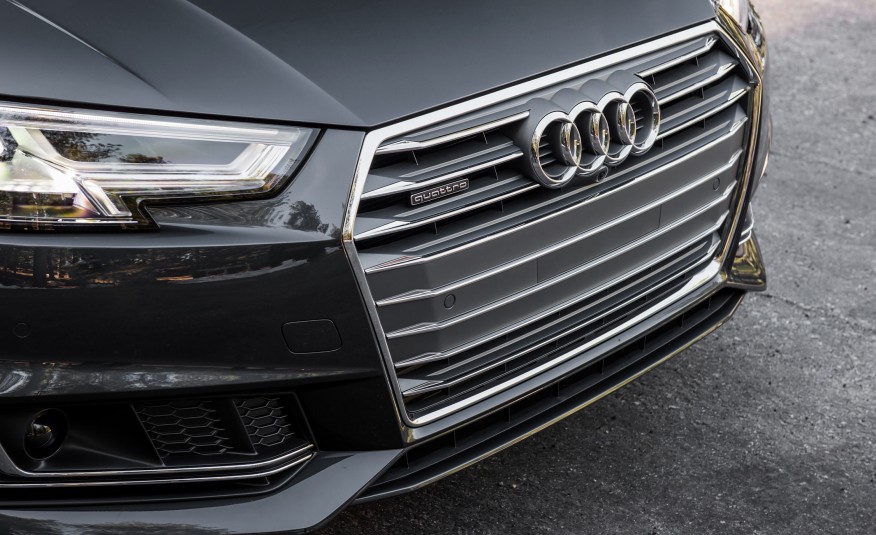 Iron block and all

Under that thick veil of conservatism and refinement, however, is indeed a sports sedan. Rev it up, and the turbocharged inline-four’s bark pierces the calm. The four-cylinder is a variation of the engine that powered the previous A4, iron block and all, but enhancements to the head and turbocharger bring output to 252 horsepower at 6000 rpm and 273 pound-feet of torque at 1600 rpm, up from 220 horses and 258 pound-feet. Snarly yet smooth, the four is free of lag and delivers a strong pull from idle to redline.

Connected to the engine is a seven-speed dual-clutch automatic that replaces a conventional eight-speed automatic. A six-speed manual will be available in early 2017. Audi informs us that it did extensive work to get the dual-clutch to match the feel of a torque-converter automatic when accelerating from a rest. It engages easily, smoothly, and predictably from a stop or a slow roll, although the transmission shares the old ’box’s predilection to shift to the highest gear possible to boost mileage. 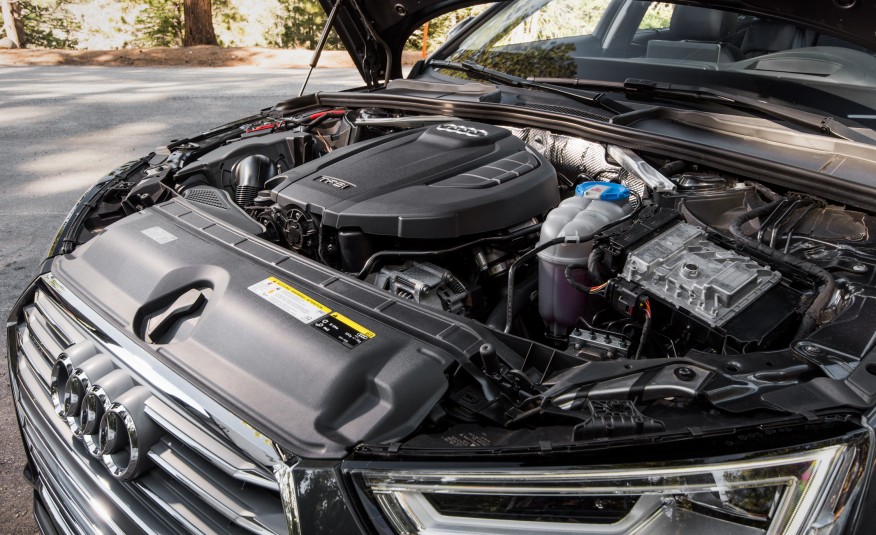 The significant benefits to the dual-clutch, from our perspective, are its instantaneous shifts and launch control. To engage the latter, select the transmission’s sport mode in the drive, put stability control into sport mode, and simultaneously hold the brake and accelerator to the floor. Engine revs rise then settle at 3000 rpm, at which point you can release the brake. Four-wheel drive ensures a spin-free getaway, and the 3671-pound A4 hits 60 mph in 5.2 seconds, 0.4 seconds quicker than its predecessor and the same time as the latest rear-drive BMW 328i. Stay on it and the quarter-mile passes in 13.9 ­seconds at 100 mph. Despite the Y-rated Hankook summer tires, a no-cost option, U.S.-market A4s are governed to 130 mph.

More-important numbers to Americans will be the EPA’s fuel-economy estimates. The A4 Quattro returns 24 mpg in city and 31 in highway tests, which works out to 27 mpg combined. That’s a 3-mpg improvement in the town and one mpg better on the highway versus the outgoing A4 2.0T. In our hands, the car managed 22 mpg overall in a mix of highway driving and stop-and-go traffic, and after attacking Angeles Crest and Angeles Forest highways as if they were Group B rally stages. 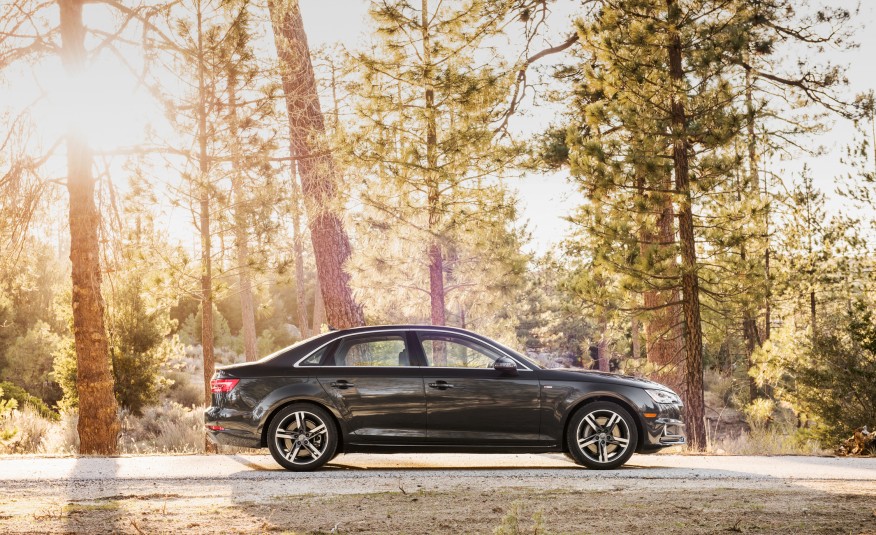 As with every Audi sedan, the A4 has the majority of its weight over its front wheels, a product of four-wheel drive and of perching the engine ahead of the front-axle line. The Quattro four-wheel-drive system is set up to send 40 per cent of the torque to the front and the remainder rearward, but the system continuously adjusts the split, front to rear. Grip from the Hankooks is good, at 0.90 g, and it’s very usable and secure grip, but the A4 works its front tires harder and they give up sooner than those of the 3-series. To combat understeer, the A4 pulses its inside brakes to pull the car into the corner. But it’s not enough to impart the sensation that the rear wheels are fully ­running the show.

Our nearly loaded test car came equipped with the adaptive damping suspension ($1000) that lowers the ride height by 0.4 inches versus the base setting and adds electronically adjustable dampers with three modes: comfort, auto, and dynamic. A $750 Sport package adds a firmer suspension that drops the car 0.9 inch, but it can’t be paired with the adjustable shocks. With adaptive damping, the shocks will auto­mati­cally change stiffness on their own or at the driver’s command. In comfort mode, the ride wallows slightly before it tightens; auto is exactly right; and dynamic starts taut and only gets tauter.

The electrically assisted power steering is also adjustable, from 1970s American-car light to modern German light to just right. In auto and comfort modes, the steering’s lack of heft imparts a slight sloppiness when the car is tracking straight ahead. Dialling up the effort by selecting sport helps eliminate some of the vagueness. Under cornering stress, the steering wakes up considerably and begins to approach the clear and lively feedback of Cadillac’s ATS and CTS. The brakes neither have nor need any adjustments. Audi fits every U.S.-bound A4 with four-piston front callipers, and the brake feel is superb. The pedal reacts precisely and with the right amount of bite. Hard stops from 70 mph take a Porsche-like 155 feet.

Though excellent brakes are standard on U.S. A4s, the extensive technology on our car adds a lot of ducats to the bottom line. Base versions—Premium in Audi-Sprache—start at $38,250, and four-wheel drive adds $2100. Standard equipment includes a sunroof, a rearview camera, leather seats, xenon headlights, power front seats, an auto-dimming mirror, 17-inch wheels, and Android Auto and Apple CarPlay. Selecting the Premium Plus trim level adds $3800 and LED headlights, 18-inch wheels, a 755-watt 19-speaker Bang & Olufsen audio system, an anti-theft alarm, heated seats with memory, and the expensive-looking S-line body kit. 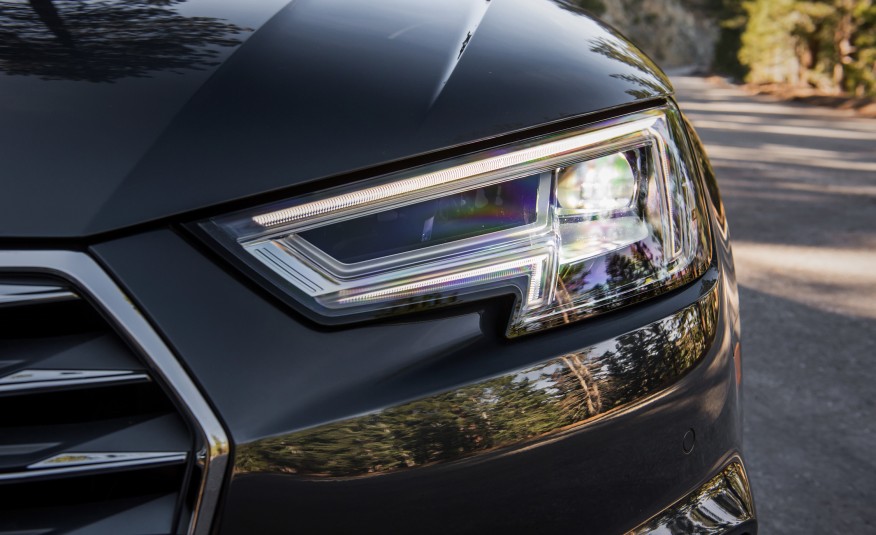 Our nearly loaded Prestige-package car, a $4800 jump over the Premium Plus model, brings a head-up display, a digital gauge cluster, and the Technology package that includes navigation, a larger centre screen, blind-spot monitoring, and rear-end-collision warning. Thus, $54,275 for the test car, which also features heat to the rear seats and steering wheel, cooled front sport seats, the electronically adjustable suspension, and the $1800 Driver Assistance package that gives the A4 the ability to drive itself briefly. If you’re the type, who’ll never use it, save the money. An A4 without the self-driving function, the head-up display, and a few other features such as heated rear seats can be had for $47,750.

Since the A4 we tested could deal with stop-and-go traffic like an autono­mous car, we felt obliged to turn on the cruise control and use it. In traffic-snarled Los Angeles, the self-driving function worked safely and without any hiccups. Set the cruise on a back road and the car will automatically slow for sharp curves using GPS and map data. As equipped, there’s more tech in the new A4 than in a six-figure A8. It’s daunting at first, but you can just ignore it, not purchase it in the first place, or shut it all off. You may also choose to give up your last shred of independence and let the car drive itself.

It’s more difficult to ignore the 12.3-inch LCD screen right behind the perfectly sculpted three-spoke steering wheel. Introduced on the TT, and now also on the Q7 and the R8, the display can be configured with either full-size or small gauges and the background can show a detailed Google map or trip information. Even in direct sunlight, the display remains as ­legible and crisp as real gauges. The rest of the in­teri­or is just as good, also when rendered in boring black. The A4 doesn’t try too hard; its luxury is born of expensive plastics, real aluminium, artfully sculpted shapes, and switchgear that looks great and clicks ­satisfyingly in your hands. It’s a soothing interi­or, too, from the shifter that doubles as a hand rest to the supportive sport seats. 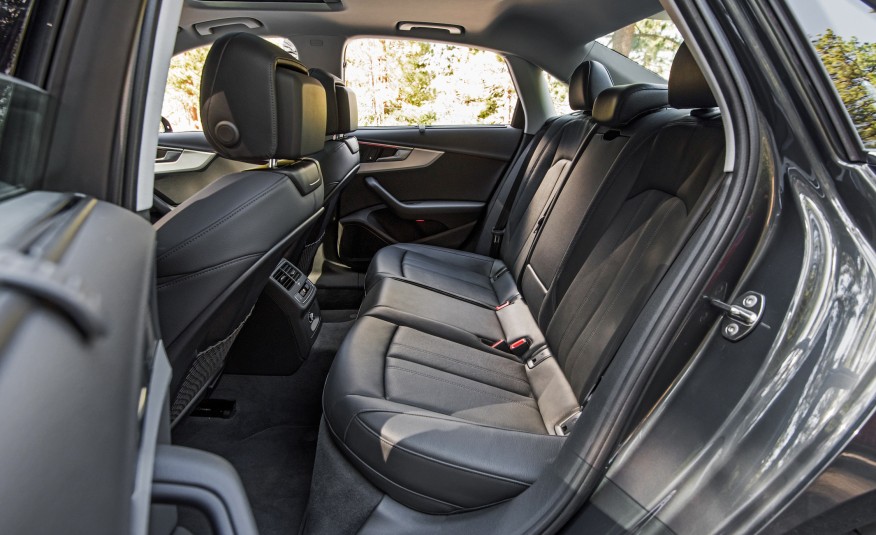 In the final analysis, Audi’s new A4 is a class leader in refinement, technology, and interior design. Its chassis dynamics and exterior haven’t made as big a leap, but the car remains an adept if secure, handler wrapped in an elegant four-door envelope. It doesn’t make much noise about it, but the A4 possesses a quiet competence that is as wonderful as it is easily misunderstood.