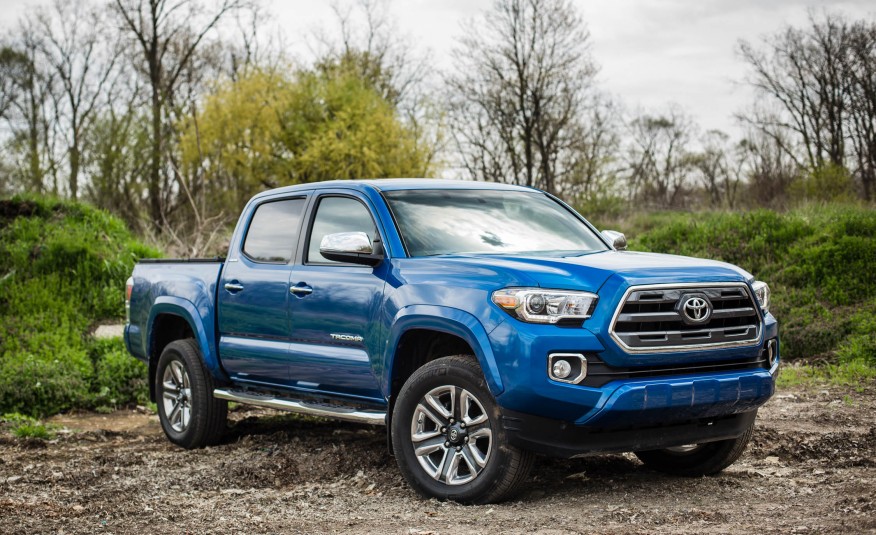 The average as-tested price of the four full-size pickups in our most recent comparison test was $56,409. And that’s not even the half of it: The most expensive half-ton truck right now is the Ford F-150 Limited, which tops out north of $68,000. Hop inside that truck, and you’re greeted by stitched leather, eucalyptus wood trim, and a full-length panoramic glass roof. It’ll even massage your rear end as you tow your boat to the lake house for the weekend with your three kids in the humongous back seat.

While full-size trucks are moving further into luxury territory in their attempt to be all things to all people, mid-size pickups aren’t quite there yet. Even the newest examples of the breed, the Chevrolet Colorado/GMC Canyon twins and the recently redone Toyota Tacoma, still feel like work trucks at heart. That’s not meant as a slight, either—we appreciate an honest pickup and we had mostly good things to say about the TRD Off-Road–equipped Tacoma with a stick shift that we tested earlier this year.

But what happens when the down-and-dirty Tacoma gets gussied up? At first glance, you might think that the high-zoot 2016 Toyota Tacoma Limited we tested here is imitating an F-150 Limited or a Ram Laramie Limited. It has a chrome-trimmed exterior, flashy wheels, a leather-lined interior, and a relatively long list of features including blind-spot monitoring, push-button start, and a 7.0-inch infotainment screen with navigation and plenty of smartphone-integration functions. Don’t be fooled by the snazzy trim: The Tacoma Limited is still more workhorse than a show pony. You won’t find any eucalyptus wood inside, just hard plastics and some stitched panels on the dashboard that aren’t particularly upscale-looking. Yes, the seats are upholstered in brown leather, but the hides are stiff, the sort of leather that you won’t feel too bad about getting muddy. The cabin is functional, with a decent number of places to stash small items, and our truck was equipped with Qi inductive charging for compatible devices. The centre-stack layout is purposeful, with easy-to-use knobs for the climate controls and infotainment system, and the simplistic gauges look chunky and industrial. Not Our Favorite Truck Engine

Industrial also describes the feel of Tacoma’s 3.5-litre V-6. Despite being a relatively modern engine with Toyota’s D4S technology that can switch between direct and port injection, the V-6 sounds about as gruff as the old Tacoma’s 4.0-litre V-6, with lots of intake noise and a grainy sound quality higher in the rev range. Not that we expect Lexus-level refinement from a pickup truck, but the Toyota engine pales next to the new Honda Ridgeline’s smooth V-6. More disappointing is the powertrain’s performance. The Tacoma’s six-speed automatic transmission upshifts early and takes some prodding to execute kickdowns, conspiring with the V-6’s peaky nature to make the Taco feel more sluggish than its reasonably quick 7.9-second zero-to-60-mph time suggests. Opting for the six-speed manual (not available in the Limited) at least lets the driver make better use of the engine’s powerband; that combination proved to be 0.6 seconds quicker to 60 mph in our testing of the TRD Off-Road model.

When we hitched up a small trailer (weighing roughly 1500 pounds, far short of this Tacoma’s 6400-pound stated towing capacity), we found ourselves wishing for more midrange grunt. The V-6 doesn’t make its peak 265 lb-ft of torque until 4600 rpm. The 3.6-litre V-6 in the Colorado and Canyon produces 269 lb-ft of torque that comes on at 4000 rpm, and the Nissan Frontier’s 4.0-litre V-6 muscles up 281 lb-ft of torque, also at 4000 rpm. Compare these with the mighty turbo-diesel in General Motors’ rival trucks, with 369 lb-ft of torque available at 2000 rpm, and it’s easy to understand the appeal of that powertrain option. Go up a size, and the Ford F-150 offers a twin-turbocharged gasoline V-6 with a whopping 375 lb-ft delivered at only 3000 rpm. When will turbos make their way into the gas engines of mid-size pickups? Sooner rather than later, we figure, and we’ll welcome their flatter torque curves. The Tacoma Limited did deliver a most comfortable ride, with the Michelin LTX tires making for a slightly smoother and quieter experience compared with the TRD Off-Road model’s knobbier Goodyear Wrangler all-terrain rubber. The Michelins also delivered a bit more skidpad grip, at 0.73 g versus the TRD’s 0.70, and stopped the truck from 70 mph seven feet shorter, at 185 feet. Both of those figures still fall short of an equivalent Chevrolet Colorado Crew Cab 4×4, which pulled 0.78 g on the skidpad and stopped from 70 mph in 174 feet. And the new, unibody Ridgeline puts all of these trucks to shame with its truly carlike road manners. Get the Cheap One Instead

We don’t take much issue with the Tacoma’s basic interior and unrefined engine when the truck in question is in the low-$30,000 range. But this Tacoma Limited cost $41,024, approaching the very upper limit of what seems reasonable to pay for a truck this size. That sum will get you plenty of F-150 or Silverado, both of which offer much more capability and refinement than the Toyota, even if this truck is more comfortable to manoeuvre in urban and parking situations.

And you can still get a decently equipped Taco for a whole lot less than $40,000, too. That’s what we’d do. A Tacoma SR5 Crew Cab V-6 4×4, for instance, can be had with many of the same options as our Limited test truck (backup camera, navigation, towing package, tonneau cover) for right around $35,000, and a more basic Tacoma SR V-6 4×4 Crew Cab would be just over $30,000. These lower trim levels are much more in keeping with the Tacoma’s rough-and-tumble character, and they strike us as a more logical choice than the loaded-up Tacoma Limited. Leave it to the F-150 Limiteds and Sierra Denalis of the world to wear the luxury mantle—the way we see it, some trucks should just be trucks.