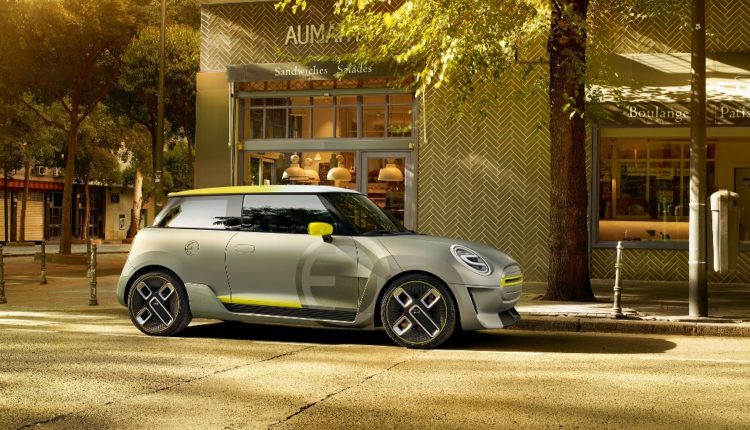 MINI to Shape the Future of Urban Mobility

MINI is shaping the future of urban mobility by providing driving fun in increasing diversity. At the 2017 Frankfurt Motor Show, the British premium brand gives visitors an impression of how the unmistakable MINI feeling will develop in future to cover a broader range beyond the current model program.

Innovative concepts and technologies provide additional room for individual flair and highly emotional experiences, while continuing to enhance the thrilling agility and exemplary efficiency that are typical of MINI.

The MINI Electric Concept showcased in Frankfurt for the first time embodies a whole new dimension of the brand’s characteristic go-kart feeling, now combining it with locally emission-free mobility. The concept vehicle conveys a message of sustainable urban transportation in MINI style while at the same time previewing a volume production model that will follow soon. The first purely electrically powered MINI to be manufactured in large-scale production will go on the road in 2019 – precisely 60 years after the classic Mini was first launched. It will make electro mobility a highly emotional experience that combines driving fun, style and individual flair – as is characteristic of the MINI brand.

Lots of driving fun on a small surface area – this traditional principle will remain an integral part of MINI in the future, too. It is a fundamental element of its character that is derived from spectacular motor racing success. 50 years ago the classic Mini achieved its third outright victory at the Monte Carlo Rally. The MINI ACV 30 concept study presented 20 years ago, demonstrated just how much the model’s racing career influenced not only the history of the classic Mini but also the development of the modern MINI.

The Anniversary Concept Vehicle that came out right on time to mark the 30th anniversary of the car’s third triumph at the “Monte” showed how the classic Mini’s characteristic design features – such as the hexagon radiator grille and the large circular headlamps – could be transferred to a modern vehicle concept. The foundation stone was laid for a new era full of driving fun and individual style in a variety of forms. Diversity and individual character are also embodied by the other elements of the MINI trade fair showcase in Frankfurt. From 14 to 24 September, the British premium manufacturer presents a broad cross-section of its range, containing elements drawn from the current model program, its rich selection of optional equipment and the latest additions in the area of accessory and lifestyle products. The setting for this display of both current and future items is Hall 11 at the main entrance to the Frankfurt trade fair centre, a site that will be shared by the BMW, MINI and BMW Motorrad brands.

The MINI Electric Concept is modern, purist and efficiently dynamic, providing a look ahead to a new form of urban mobility free of local emissions that still guarantees unmistakable driving fun. The spontaneous response of the electric motor to every movement of the accelerator adds a whole new dimension to hallmark brand agility. The powerful drive of the MINI Electric Concept draws its energy from a lithium-ion battery, ensuring maximum range and typical MINI agility combined with emission-free mobility.

The MINI Electric Concept not only stands for increased driving fun, but it also adds a touch more style in local emission-free city traffic. Its design combines hallmark brand proportions and design features with specific details reflecting the fact that is purely electrically powered. Since the electric motor does not require cooling air, the hexagonal front grille is closed in order to enhance the car’s aerodynamic properties. There are also fibreglass attachment parts that reduce aerodynamic drag. The paint finish in Reflection Silver and Interchange Yellow is reminiscent of the MINI E presented in 2008. Produced in a small series of some 600, the latter was subjected to field tests in everyday driving conditions, thereby providing key insights for the development of the purely electrically powered BMW i3.

The MINI Electric Concept is the next step along the way to sustainable urban mobility. The BMW Group announced in July 2017 that the expansion of its model range to include electrically powered vehicles was to be a central pillar of its corporate strategy. In this connection, the start of production of the first purely electric MINI was announced for 2019. Based on the MINI 3 door, the electric vehicle will be manufactured at the MINI plant in Oxford. Its drive-train will be produced at the Dingolfing and Landshut sites – the competence centres for e-mobility within the BMW Group production network.

The world premiere of the MINI Electric Concept comes just a few months after the launch of the MINI Cooper S E Countryman ALL4 (combined fuel consumption: 2.3 – 2.1 l/100 km; combined power consumption: 14.0 – 13.2 kWh/100 km; combined CO2 emissions from fuel: 52 – 49 g/km). The first plug-in hybrid model of the British brand is already paving the way for purely electric and therefore locally emission-free driving fun. Thanks to its battery range of up to 42 kilometres in the NEDC test cycle, the MINI Cooper S E Countryman ALL4 effortlessly overcomes the limits of urban mobility without producing any CO2 emissions at all. And the sustainable MINI feeling is ensured beyond city limits, too: a top speed of 125 km/h is possible in electric driving mode.

This means that pure electric power is already sufficient to take care of most everyday driving. The combustion engine comes into play if a higher level of performance is required. Together the two power units produce a system output of 165 kW/224 hp. Here again, the MINI Cooper S E Countryman ALL4 offers an entirely distinctive experience. The precisely controlled interplay between the combustion engine driving the front wheels and the electric motor powering the rear wheels makes for an intelligent all-wheel drive system that guarantees supreme driving fun in all-weather conditions and on all road surfaces.

The MINI feeling in the premium compact segment: MINI Countryman and MINI Clubman.

The launch of a model variant with plug-in hybrid drive once again makes the MINI Countryman the pioneer of a whole new dimension of the typical go-kart feeling. Its predecessor was groundbreaking, too: it was the first all-wheel-drive model of the brand to be able to handle rough terrain, winning over additional target groups with its advance into the premium compact segment. The current generation of the MINI Countryman offers even more space for passengers and luggage plus a noticeable increase in ride comfort and functionality, as well as further advancements in the areas of sporty flair, efficiency and premium characteristics. In addition to the plug-in hybrid drive, there are three petrol engines and three diesel engines to choose from for the all-rounder, and the all-wheel-drive system ALL4 is available for four of these models.

The success of the MINI Clubman shows just how well the British brand has now become established in the premium compact segment. In this hotly competed vehicle category, its unique body concept already sets it apart from the rest. With its strikingly long roofline, four side doors and the two split doors at the rear, the MINI Clubman is the modern interpretation of a classic shooting brake. Five fully-fledged seats, a large luggage compartment and a diverse range of options regarding spatial distribution mean the model perfectly meets mobility needs that go far beyond those of purely urban mobility. The MINI Clubman is likewise available with three petrol engines and three diesel engines. The two most powerful engines can be combined with the all-wheel-drive system ALL4 on request.

The concept study of a MINI Cooper for the 21st century was presented at the Frankfurt Motor Show 20 years ago. A unique success story began shortly afterwards: the relaunch of the British brand offered a new interpretation of its underlying principle – namely maximum interior space and functionality within the smallest possible surface area. The result was the first small car in the premium segment and a new original. The MINI instantly aroused enthusiasm with its agile driving properties, powerfully expressive design, fascinating tradition and individual style. The brand’s classic body concept is also embodied in the latest generation of the MINI 3 door. With the very finest drive and chassis technology, progressive driver assistance systems and intelligent connectivity, it meets the needs of modern target groups who attach importance to driving fun, innovative technology, quality and character. The new MINI 5 door demonstrates how the tradition-steeped principle of the clever use of space can be advanced with a further increase in functionality that results from a body extended in length by 161 millimetres, two additional doors and three seats at the rear. The trio of small car originals is rounded off with the MINI Convertible. In its role as the sole premium convertible in the small car segment, the four-seater is still unrivalled in the current model generation.

The John Cooper Works models arouse passion for motor racing. The model selection of top athletes currently encompasses four distinctive characters that all have one thing in common: an overall package – comprising the engine, suspension and both exterior and interior design – which was developed by sound racing experience and fine-tuned on the race track. This makes MINI John Cooper Works the epitome of maximum performance in a premium small car. In the MINI John Cooper Works Convertible, extremely lively sprint capacity is combined with spontaneous open-air pleasure.

Interview with Hassan Soukar on Influencer Importance, Part I

Highly Automated Driving on Highways Is No Longer Just a Dream