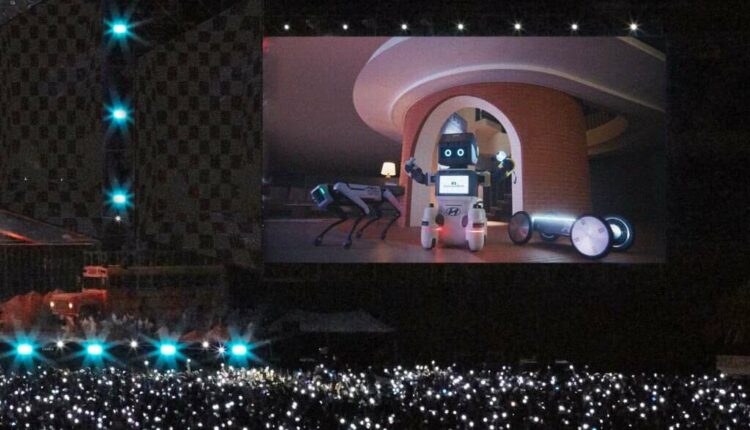 To the delight of fans in attendance, ARMY Spot also made a surprise appearance at the concert, escorting BTS members to the main stage.

Simulcast on Reverse; the video also introduced Hyundai Motor‘s future mobility technologies to audiences who could not attend the concert and promoted Busan, Korea’s second-largest and most fantastic port city, which is vying to host World EXPO 2030.

In addition, Hyundai Motor set up a brand booth at the concert venue where it presented the ‘Goal of the Century campaign, which kicked off in April for the upcoming 2022 FIFA World Cup. Displayed inside the booth were T-shirts worn by BTS members who are part of Team Century, a group of ambassadors united toward the global sustainability goal.

The company offered eco-bags motivated by Hyundai Motor’s mobility platform MobED and BTS to visitors who registered as supporters of the Goal of the Century campaign, encouraging eco-friendly activities and showing its efforts toward carbon neutrality.

In addition, Hyundai Motorstudio Busan has been operating an exhibition related to the Goal of the Century campaign since October 6. It is actively promoting Busan at home and abroad for World EXPO 2030.

“Hyundai Motor and BTS have collaborated since 2018, and our latest effort aims to draw domestic and foreign support for hosting World EXPO 2030 in Busan,” said Thomas Schemera, Global Chief Marketing Officer and Head of the Customer Experience Division at Hyundai Motor Company. “We will continue communicating with customers worldwide about Hyundai’s future mobility vision and enhancing Korea’s international status so that the World EXPO 2030 can be held in Busan.”

In July, the Group invited high-ranking officials from 10 major Latin American countries to Hyundai Motorstudio Busan to garner their support for Busan as a venue for World EXPO 2030 and screened official promotional videos at Hyundai and Kia booths during the Busan International Motor Show.

TecnoRib Is Once Again a Bob Finalist With the Pirelli 50