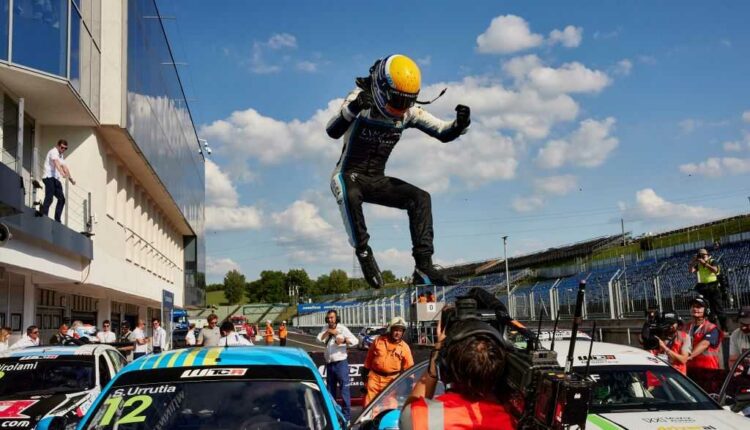 Santiago Urrutia claimed the first FIA World Touring Car Cup win of 2022 for Lynk & Co Cyan Racing in front of a massive crowd at the Hungaroring.

The Uruguayan driver started from the pole in the second race, holding the lead from lights to flag despite a safety car session and scorching conditions.

The victory has elevated him to third in the drivers’ championship.

“That was a really tough and super warm race! Rob Huff was very close during the race and made no mistakes. I’m super happy for the team; they gave me an awesome car. We have to keep this going for the rest of the season,” said Santiago Urrutia.

Yann Ehrlacher made two podium finishes for the Lynk & Co 03 TCR squad this weekend, pulling a robust overtaking move on the penultimate lap of the first race to snatch second place.

The reigning champion was tied with title rival Mikel Azcona on scoring the most points of all this weekend.

“This has been an excellent weekend, scoring the most points together with Mikel. I’m pleased about my overtake for second in the first race and the podium finish. The performance is here and has maximised our chances,” said Yann Ehrlacher, who has climbed to fourth overall.

“I had two good races, and I’m happy to finish in the top five again. Unfortunately, we had some vibrations, and I had to back off a bit to save the tyres. I managed to score some good points for the championship, and I hope to be back strongly for the next race,” said Ma Qing Hua.

Quadruple world champion Yvan Muller had a tough weekend, finishing tenth in both races and was hit from behind by a rival driver in the second race.

“We managed to improve the car during the race day. The balance was better for the second race. I managed to overtake three or four cars, but the tenth isn’t much to write home about. Hungaroring is tough to progress on when you start further down the field,” said Yvan Muller.

Thed Björk recovered ground in the first race to finish eleventh but was, just as Yvan Muller, hit from behind in the second race.

“I had two tough races, and I got pushed from everywhere. The plan for the next race is to qualify higher up, making things so much easier. I’m happy for the team on the strong overall results this weekend, though,” said Thed Björk.

The next FIA World Touring Car Cup is just two weeks away, with Aragon Motorland hosting the fourth round on June 25-26.

A Horsepower Limit for New Cars? That Could be a Good Idea