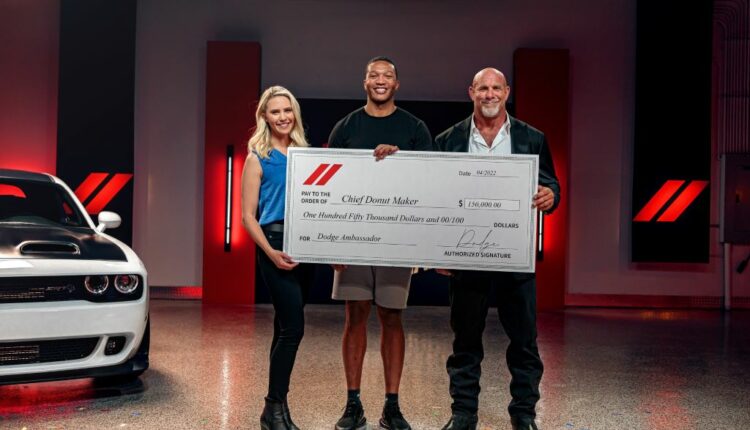 After months of anticipation and more than 173,500 applications, the Dodge brand’s search to fill the most outstanding automotive job globally came to its supercharged conclusion today. Proving he has the character and the drive in a series of high-stakes challenges, Preston Patterson of North Carolina has officially been named chief doughnut maker in today’s grand finale webisode, now airing on DodgeGarage.com.

“After a nearly four-month search for our chief doughnut maker, we were blown away by our ten finalists and how each uniquely embodied the very best of the Dodge brand,” said Dodge CEO Tim Kuniskis. “We put our candidates to the test both on and off the track, and Preston never lifted, proving that he possesses the knowledge, character and drive to represent the Brotherhood of Muscle.”

“To go from a kid who had a poster of a Dodge Viper on my bedroom wall to being handed the keys to a Dodge Challenger Hellcat as my company car is beyond my wildest dreams,” said Patterson. “I’m 100% ready for my first assignment as chief doughnut maker. I’m looking forward to representing Dodge and the Brotherhood of Muscle at some epic automotive events this next year, especially Roadkill Nights this summer.”

The competition began with applications in January, then short video submissions due by the end of February. The videos informed the brand’s selection of the top 10 finalists in March. The finalists were flown out to Radford Racing School for a series of challenges and eliminations that became the basis for the web series now airing on DodgeGarage.com.

The chief doughnut maker will earn $150,000, receive keys to a Dodge Challenger SRT Hellcat and access to some of the auto industry’s most significant events, all over a one-year commitment.

The top doughnut maker search is part of the brand’s Never Lift plan, which provides a 24-month road map to Dodge’s performance future.

The announcement was made today, HEMI® Day (April 26), celebrated by Dodge and Mopar fans everywhere. It references the legendary 426-cubic-inch HEMI V-8 built from 1964 through the 1971 model year.

For more than 100 years, the Dodge brand has carried on the spirit of brothers, John and Horace Dodge. Their influence continues today as Dodge shifts into high gear with muscle cars and SUVs that deliver unrivalled performance in each segment where they compete.

Dodge drives forward as a pure performance brand, offering SRT versions of every model across the lineup. For the 2022 model year, Dodge delivers the drag-strip dominating 807-horsepower Dodge Challenger SRT Super Stock, the 797-horsepower Dodge Charger SRT Redeye, the most potent and fastest mass-produced sedan in the world, and the Dodge Durango SRT 392, America’s fastest, most powerful and most capable three-row SUV. Combined, these three muscle cars make Dodge the industry’s most powerful brand, offering more horsepower than any other American brand across its entire lineup.