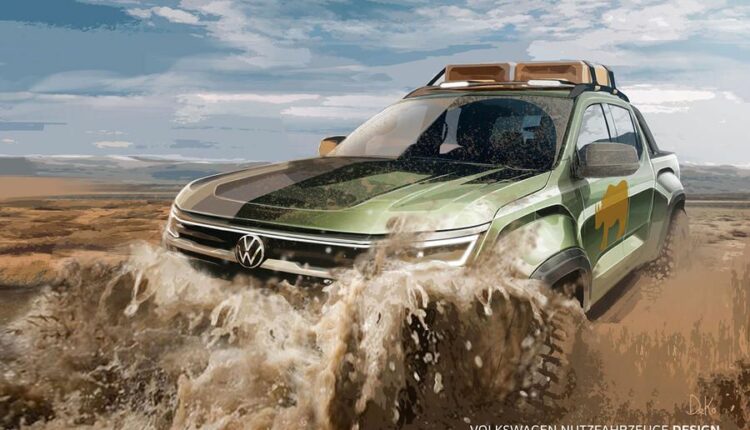 Volkswagen has promised that the new Amarok pick-up, which will be launched next year, will have a “clear Volkswagen DNA”, even though it has been developed jointly with Ford.

The Amarok will be co-developed with the recently unveiled new Ford Ranger pick-up and built at a Ford plant in Silverton, South Africa. The two companies have agreed to a far-reaching “global alliance” in 2019, including the production of commercial vehicles and electric cars. The next-generation Amarok will be the first model to be launched under this initiative, which Volkswagen describes as an “important strategic step”.

Volkswagen has revealed two more concept images of the new Amarok, hinting at both the exterior and interior design. The company promises that the Amarok will have a “completely new look” and offer a more extensive range of features than its predecessor – including new driver assistance functions and connectivity options.

According to Albert-Johann Kirzinger, head of design at Volkswagen Commercial Vehicles, a new front end and ‘X-Design’ features “will mark the new Amarok and underline its claim to be groundbreaking. We have given the strength and power of the new Amarok an unmistakable expression – with clear Volkswagen DNA, inside and out.”

The new Amarok will be unveiled early next year before selling in selected markets. The market launch in Europe is planned for the end of 2022.

The latest sketch of the new Amarok was shown at the Volkswagen Commercial Vehicles annual conference. It indicates that the Amarok will get a bolder, more aggressive grille, similar to the current Touareg, while the angular wheel arches are reminiscent of the American Atlas SUV.

The vehicle will be based on the platform used for the Ranger pick-up, and the lower costs involved will be key to Volkswagen’s commercial vehicle division achieving the economies of scale it needs. Ford has invested nearly £800 million in preparing its Silverton plant to build both models at a rate of 200,000 units a year.

According to Ford, the expansion of the plant will create 1200 new jobs at the site itself and 10,000 new jobs throughout the supply chain. The company intends to put the Silverton plant into “island mode” by 2024 and implement a series of efficiency-boosting measures to go completely “off the grid”.

The agreement between Ford and Volkswagen also includes a VW van based on the Transit platform to be built in Turkey and Ford electric cars based on the VW Group‘s MEB architecture to be produced in Germany from 2023.