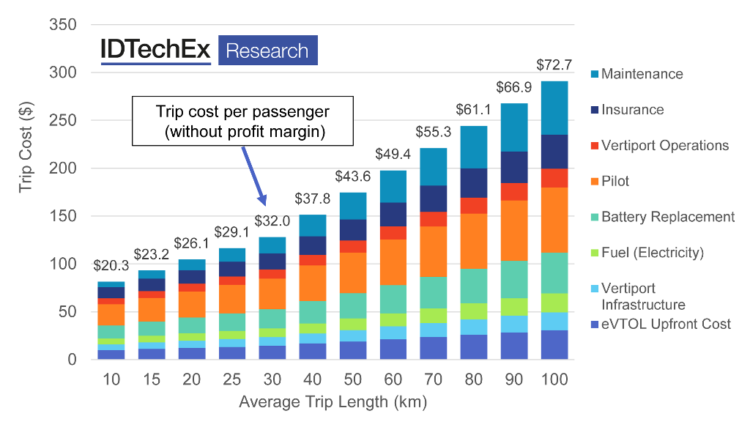 Whereas robotaxis are repurposed autonomous cars, robot shuttles are a new form of intensive-use land vehicle. Looking like a tiny railway carriage, they can go in shopping malls and down paths with no need for U-turns because they are symmetrical. Cities request that they provide inclusiveness by being usable by the poor and disabled in wheelchairs. Some developers have lost sight of that.

Newcomer Auve Tech sensibly sees them as last-mile travel from the bus stop as an example. It is developing supercapacitor-powered robot shuttles working with Europe’s leading supercapacitor manufacturer Skeleton Technologies also in Estonia. A never-replace supercapacitor shuttle can be driven 24/7, charging in 11 seconds at bus stops as IDTechEx predicted earlier. Amazon Zoox wisely fits enough battery for non-stop full-day use.

Some charging can come from sun-tracking solar charging stations providing 30% more electricity than static. Desmond Wheatley, chief executive of Envision Solar, says, “Our network is rapidly deployed because the businesses or government entities using it do not need to get any permits or incur any construction costs. It is scalable and can serve any fleet while the solar-powered vehicles create no emissions.”

Some mistakes are being made. 8 person Auve and 4 person Zoox have suboptimally small shuttles, though AUVE will accept a wheelchair. For repurposing and fast payback, you need large sliding doors and around 20 person capacity, some standing. Auve and Zoox claim highway speeds with no evidence of appropriate crumple zones. Auve is trying fuel cells, which, with chronic inefficiency, are more a way of getting grants than sales. The Toyota Woven City is intended for the base of Mount Fuji using its e-Palette robot shuttles. However, in 2021, Toyota shows little progress and foolishly briefs against battery electric vehicles. Toyota was the thought leader in how the shuttles will repurpose as mobile libraries, parcel delivery, offices, utility vehicles, fast-food cafes. There needs to be more focus on rapid electric repurposing and researching what repurposing is viable. Meanwhile, most smart cities promise to ban cars and have large plazas with no conventional vehicles, no sidewalks, so the passenger use of smart shuttles is clear.

International cooperation is now the game’s name, followed by global deployment when the toughest challenge – fully autonomous operation that is legal, acceptable, safe and insured – arrives. The latest entrant Auve has partners in the USA, Germany and Finland. Auve Tech grew out of a cooperation project with Tallinn University of Technology from 2017. Its first radio-controlled vehicle operation in Tallinn’s Ülemiste City was a success. A project in Lamia, Greece, finished at the end of 2020.

Everything You Need to Know About Honda’s Original VTEC System