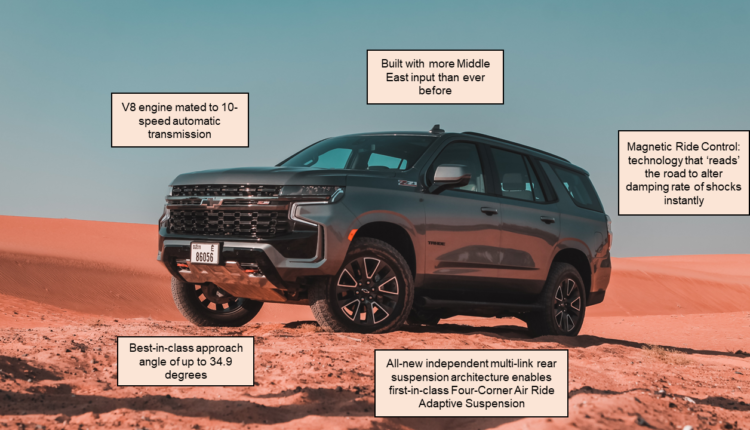 Built with more Middle East input than ever before, the Tahoe Z71 is in its element with specifically designed off-roading performance features for the region’s most adventurous drivers.

Chevrolet is offering the Z71 as a standalone trim on the all-new Tahoe for the first time. Based on regional input from loyal adventurers, Chevrolet engineers designed an SUV as fierce, stylish and capable as its drivers.

The very embodiment of action, the Tahoe Z71 boasts exceptional performance off-road along with best-in-class drive dynamics. The powerful V8 engine mated to an advanced 10-speed automatic transmission is standard, allowing the Tahoe Z71 to sail across the softest sand with ease.

Likewise, the all-new independent multi-link rear suspension transforms the driving dynamics, allowing each rear wheel to separately handle road conditions. This architecture also enables first-in-class Four-Corner Air Ride Adaptive Suspension which provides load-levelling at all corners of the vehicle and up to four inches of ride-height adjustment; drivers will feel the smoothness of the journey, even as they throw the Tahoe Z71 across the dunes.

The Tahoe Z71 also comes equipped with the Autotrac system, a 2-speed automatic, active transfer case offering five modes: Auto 4WD, 4HI, 4LO, 2HI and Neutral. These modes can be activated across the different landscape, supporting the driver no matter what’s beneath the wheels. For example, while Auto 4WD can be used in slippery conditions and mild off-road driving, the driver can switch to 4Hi to increase traction on loose and soft sand for better purchase. 4Lo provides optimal torque delivery at moderate speeds throughout the range and up to 80 kph for a more demanding route.

The Tahoe Z71s off-road credentials are bolstered by one of the industry’s most sophisticated chassis technologies with Magnetic Ride Control. Using sensors to continually ‘read’ the road and alter the shocks’ damping rate almost instantly, reducing bounding body roll and vibrations, making for a smoother ride even across rough ground.

An exclusive offering on the Chevrolet Tahoe Z71 in the Middle East is the Four-Corner Air Ride Adaptive Suspension, Magnetic Ride Control, Autotrac an electronic limited-slip differential that works together to provide Active Response 4WD. The all-new Active Response 4WD System is an intelligent 4×4 system that comes standard on the Z71 in the Middle East, allowing the driver to easily and confidently tackle off-road conditions, by sending optimal torque each wheel to improve traction. 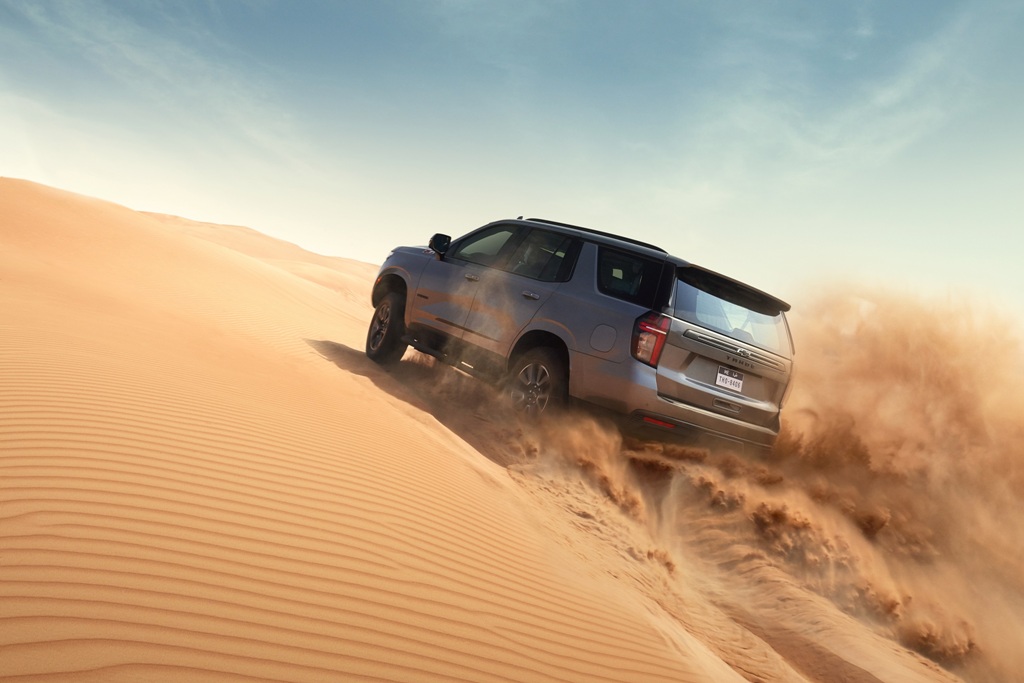 Besides the power packed into the official ‘SUV of Action’, the Tahoe Z71 climbs up, over and down the most intimidating of dunes with ease, thanks to a generous approach angle of 32 degrees go to the best-in-class 34.9 degrees, with the highest suspension set-up selected.

Like any extreme sport, off-roading comes with a unique set of challenges, which the Tahoe Z71 is designed to tackle. To crest the highest dunes, drivers have to travel at a side angle, often at high speeds which, given the soft sand, can throw the vehicle into severe angles. Under normal safety precautions, this would deploy the side airbags in anticipation of the car rolling over. However, the Tahoe 4WD models offer a Rollover Detect Deactivation switch which prevents the curtain airbags from deploying unintentionally. This is the kind of smart engineering, specially tailored to the Middle East customer, making the Tahoe Z71 the ideal off-road companion.

Finally, the Tahoe Z71 doesn’t just support drivers while off-roading but when they’re returning home too. Before heading off-road, drivers need to deflate their tires, so they better travel over-sand. When ready to return to the tarmac, Tire Fill Alert notifies the driver when they’ve reached recommended pressure while drivers air up with a gentle sound of the horn.

The all-new Tahoe is engineered to unlock maximum performance, no matter the environment. The Tahoe Z71, in particular, is synonymous with off-road performance, and your new best friend on every adventure. The Chevrolet Tahoe line-up is available in dealerships across the Middle East now.