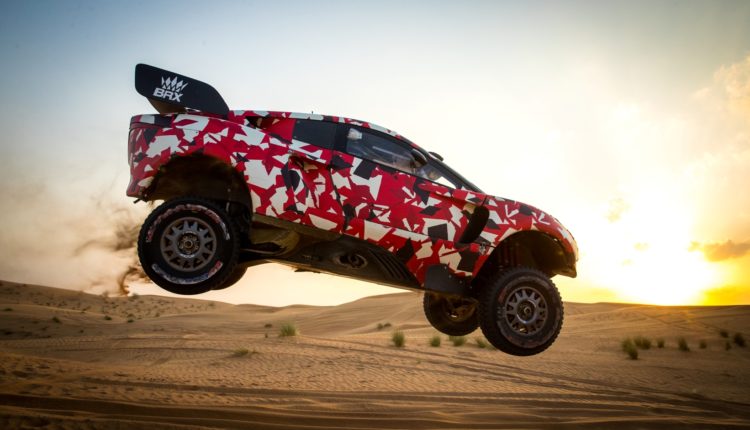 Bahrain Raid Xtreme (BRX) has been undertaking a gruelling test program of the BRX T1 4×4 in the Dubai desert as the team and drivers undergo final preparations ahead of the Dakar Rally 2021.

The team spared no time in putting their combined experience into practice, pushing the BRX vehicle to the limits in advance of taking on one of motorsport’s biggest challenges. The period of testing has been vital in preparing the car and team for the Dakar Rally in January; fine-tuning all areas of performance to ensure BRX arrives at the start line ready to compete.

The bespoke BRX vehicle – which will compete in the top-level T1 class – was tested to extremes across uncompromising desert conditions that included steep dunes, thick camel grass and barren, rocky terrain. The Dakar Rally 2021 route was recently announced, featuring almost 5,000 kilometres of competitive driving across the 12 stages through the Kingdom of Saudi Arabia.

BRX Driver, Nani Roma, commented: “I have spent almost a month in Dubai testing the BRX T1 4×4, and each day we are pushing the limits even more. As a team, we have done many kilometres and are really excited about how the car is reacting to the dunes. The whole team have been working hard and are all highly motivated. It has been great working with Sebastien, he is an experienced driver, and we understand each other well.”

BRX’s bespoke Dakar Rally T1 car is a four-wheel-drive car, powered by a 3.5-litre turbocharged petrol V6. The vehicle builds on Prodrive’s experience competing at the highest levels of world motorsport for over three decades. It has been styled by Ian Callum, one of the world’s leading automotive designers, and his team at CALLUM.

BRX Driver, Sebastien Loeb, commented: “Dubai has allowed us to test the car in similar terrain to that we can expect at the Dakar, in Saudi Arabia. I am happy with the car’s performance and balance. Still, having already competed in Dakar four times, we don’t underestimate the challenge the Dakar presents, especially to a new team and new car. We are looking forward to getting underway in just three weeks.”

The Internet of Things, 3D Printing, Robotics, and Cognitive Automation Are Reinventing the Automotive Industry