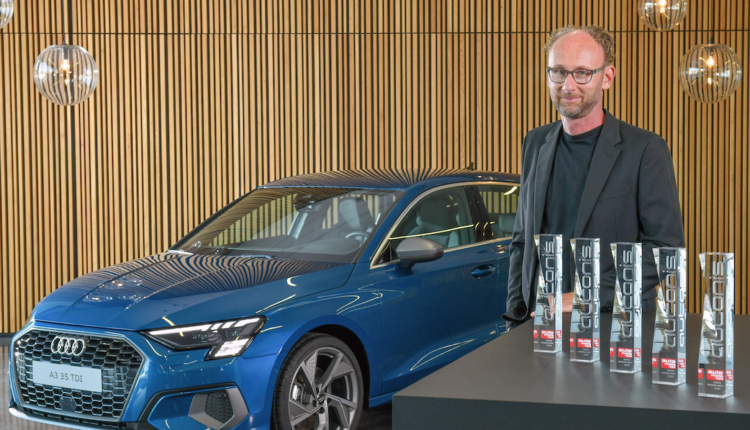 Audi Won Half the Trophies Awarded at the “Autonis” Awards Ceremony

Audi won half the trophies awarded today at the “Autonis” Awards ceremony. In the readers’ choice by auto motor and sport, the premium brand took home the coveted award in five of ten categories with models from many segments. The magazine honours the best new design features with the awards each year.

“Each of these models is part of the Audi family, yet has its own character,” said Head of Design Marc Lichte, who accepted the five trophies on behalf of the entire design team. “At Audi, the design is the number 1 reason for buying. That is just one reason why it is so imperative to us as a premium brand that the design of our models not only appeals to us but also meets the tastes of our customers. You have once again given us an important confirmation of this with the ‘Autonis’.”

The Audi A1 citycarver claimed victory in the “Small Car” category with 33 per cent of the vote. It debuted last year and is characterized by a thoroughly robust, off-road look. This includes not just the large, octagonal Singleframe, but also the redesigned side sills with contrasting attachments, the higher ride height and underbody protection in stainless steel paint.

The winner in the “Compact Car” category was the new Audi A3. 19.6 per cent of the vote went to the premium compact model, which has been available to order since March. It is the first Audi model to offer Matrix LED headlights in combination with digital daytime running lights. The latter is a 3×5 pixel field of LED segments that gives each A3 derivative its own unique light signature.

In the “Compact SUV” category, 24.4 per cent of the participating readers cast their vote for the Audi Q3 Sportback. A distinguishing feature of the SUV coupé is the low roofline, which makes the model appear significantly longer than its sister model, the Q3. Also, the Q3 Sportback is almost three centimetres (1.2 in) flatter and thus has a more muscular appearance.

The Audi A5 offers an even more determined appearance since last year’s model update. The Singleframe with the honeycomb insert is flatter and somewhat wider than on the previous model. Air vents above the grille are reminiscent of the classic Audi Sport Quattro from 1984. 36.3 per cent of the vote in the “Mid-Size” category underlines the success of this product improvement.

The Audi RS 6 Avant claimed victory in the “Full-Size” category with 22.6 per cent of the vote. A significantly flatter Singleframe, a body widened on both sides by roughly 40 millimetres (0.1 in) with widely flared wheel arches and an RS-specific bumper with rear diffuser and oval tailpipes underscore the unmistakable character of the high-performance Avant compared with the A6 Avant basic model.

More Than 100 New Models Put to the Vote

With a total of five victories, Audi was the top winner at this year’s “Autonis.” The premium brand thus clearly impressed the readers of auto, motor and sport with its models. Overall, there were more than 100 new models from various manufacturers to choose from. Some 16,000 participants cast their readers’ choice votes.