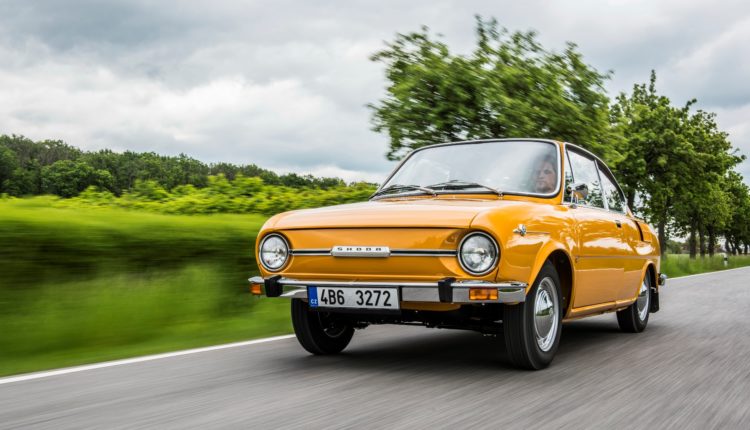 The ŠKODA 110 R, One of the Most Elegant Czech Sports Cars, Made Its Debut 50 Years Ago

50 years ago, the legendary ŠKODA 110 R Coupé celebrated its trade fair premiere in Brno. The elegant sports car with a rear engine was a huge sales success and served as the basis for the Czech car manufacturer’s legendary rally and racing cars. Alongside the ŠKODA 180 RS and 200 RS prototypes, the ŠKODA 130 RS, which later became known as the “Porsche of the East”, was also derived from the 110 R.

At the same time as celebrating the 125th anniversary of its founding, ŠKODA AUTO is also looking back in 2020 on the market launch of several models that have played a significant role in the automaker’s history. These vehicles include the 110 R, which added a dynamic sports coupé to ŠKODA’s model range at the beginning of the 1970s. 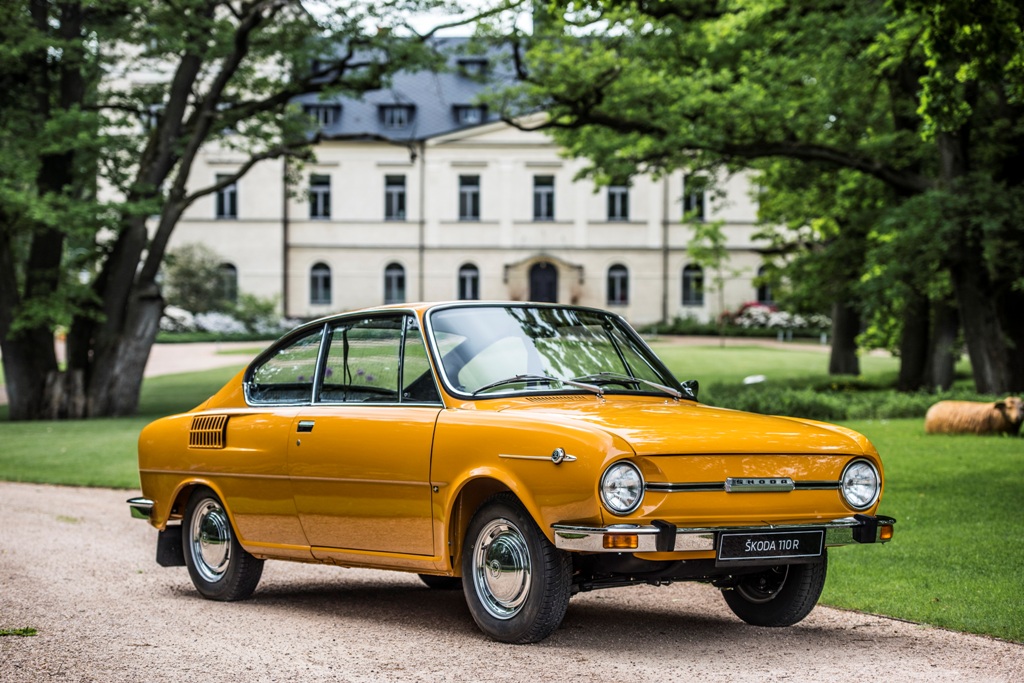 In 1964 ŠKODA began producing the ŠKODA 1000 MB notchback saloon. With its self-supporting body, rear engine and rear-wheel drive, this model heralded a new technological era at the Czech car manufacturer. ŠKODA invested heavily in modern production facilities for the new series and soon concentrated fully on the production of this newcomer due to the sales success of the rear engine saloon in export markets. For this reason, ŠKODA discontinued production of the FELICIA convertible. However, demand for sports models remained strong, particularly in Western European markets. ŠKODA responded to its customers’ wishes with a vehicle that would give the brand an image boost despite remaining a niche product in terms of the planned number of units. While the development of the ŠKODA 100/110 L series was underway (the successor to the 1000 MB that received body upgrades, front disc brakes and improved safety equipment), work began on the two-door coupé version ŠKODA 110 R. 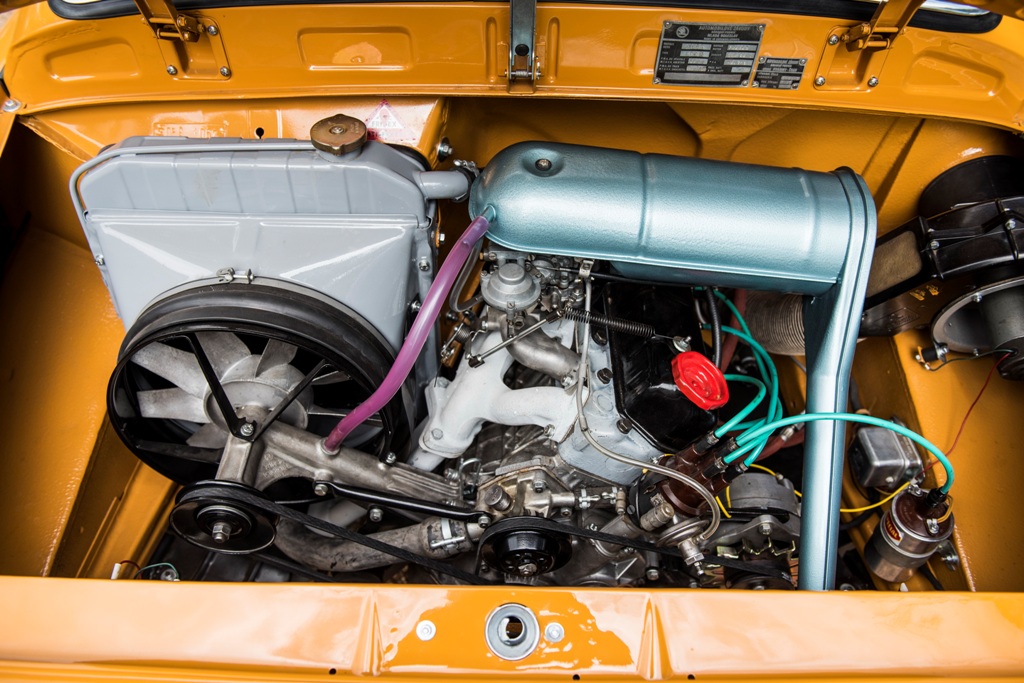 Constructing the Prototypes and Test Drives in the Former GDR

The development of the 110 R, nicknamed ‘Erko’ in the Czech Republic, began in 1966, and in March 1968 the prototype with the internal designation Š 718 K rolled out of the ŠKODA factory in Kvasiny. The coupé body differed from the notchback version not only with its elegantly sloping rear end but also with a steeper sloped windscreen and two wide doors with frameless windows. During test drives, which took place on motorways in the GDR, among other places, the coupé reached a top speed of 145 km/h. The second prototype was completed in March 1969. This was equipped with a double carburettor and an AC generator instead of a dynamo. 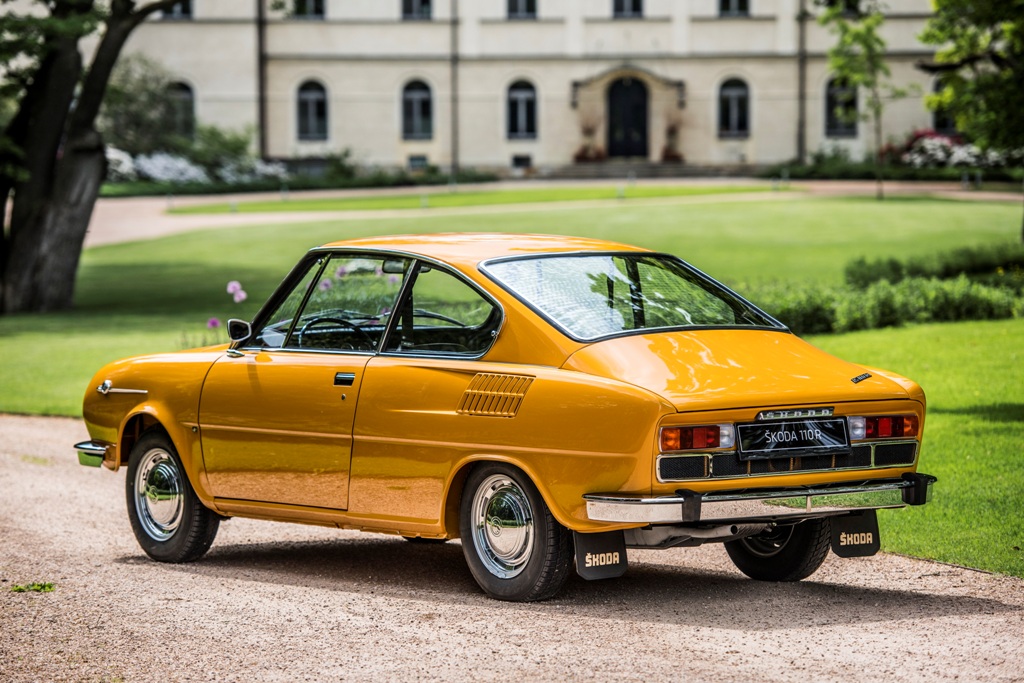 ŠKODA invited many journalists to the world premiere of the 110 R, which was held in the halls of residence at the company’s vocational school in Mladá Boleslav. After the press conference, the guests were allowed to try out the new sports coupé nearby at Hoškovice airport.

Presentation at International Motor Shows and the Start of Production

The public caught their first glimpse of the 110 R on 5 September 1970 at the engineering fair in Brno, where ŠKODA exhibited three copies. The foundation stone for the success of the sports coupé on export markets was laid at the motor shows in Paris, London and Turin, which opened their doors in quick succession in October 1970. Demand for the 110 R rose sharply, but the ramp-up of ŠKODA’s production encountered problems due to the political conditions at the time. By the end of 1970, only 121 vehicles had been built, and it was not until the second quarter of 1971 that the first units of the coupé could be delivered to customers overseas. Subsequently, the Czech car manufacturer concentrated primarily on exports: of around 3,000 units produced in 1971, only 442 vehicles made it to the showrooms of the then Czechoslovak monopoly dealer Mototechna. The 110 R came with a hefty price tag of at least 78,000 crowns, which at that time was the equivalent of around 40 months’ wages. 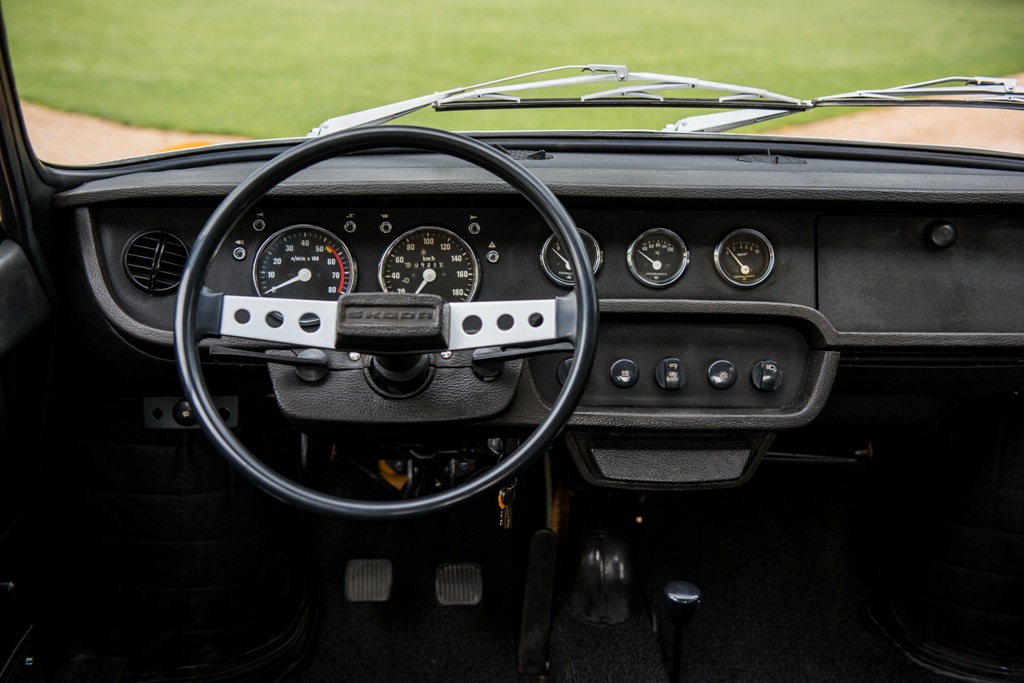 The 110 R measured 4,155 millimetres in length, 1,620 millimetres in width and, at the height of 1,340 millimetres, was 40 millimetres shorter than the basic notchback model. The wheelbase was 2,400 millimetres. The four-cylinder in-line engine equipped with an oil cooler generated an output of 38 kW (52 hp) at 4,650 rpm with a displacement of 1,107 cc, a compression ratio of 9.5:1 and twin carburettors, and coupled with its low unladen weight of 880 kilograms, it offered a thrilling driving experience. The cylinder and crankcase, as well as the bell of the direct-shift four-speed transmission located in front of the rear axle, were manufactured using the aluminium die-casting process based on an original Czech patent. On its radial tyres (165 SR 14), the 110 R reached a top speed of 145 km/h, the sprint from zero to 100 km/h took 19 seconds. A dual-circuit brake system controlled the deceleration, with disc brakes at the front and drum brakes at the rear. The brakes were manufactured by ŠKODA under licence from the English brand Dunlop. As 57 per cent of the vehicle weight was on the driven rear wheels, the sports coupé had excellent traction. The average fuel consumption was 8.5 litres per 100 kilometres, and the volume of the fuel tank in the front was 32 litres. Under the front bonnet, there was enough space for 250 litres of luggage, the second boot behind the rear seats had a capacity of 120 litres and could also be accessed on the go. 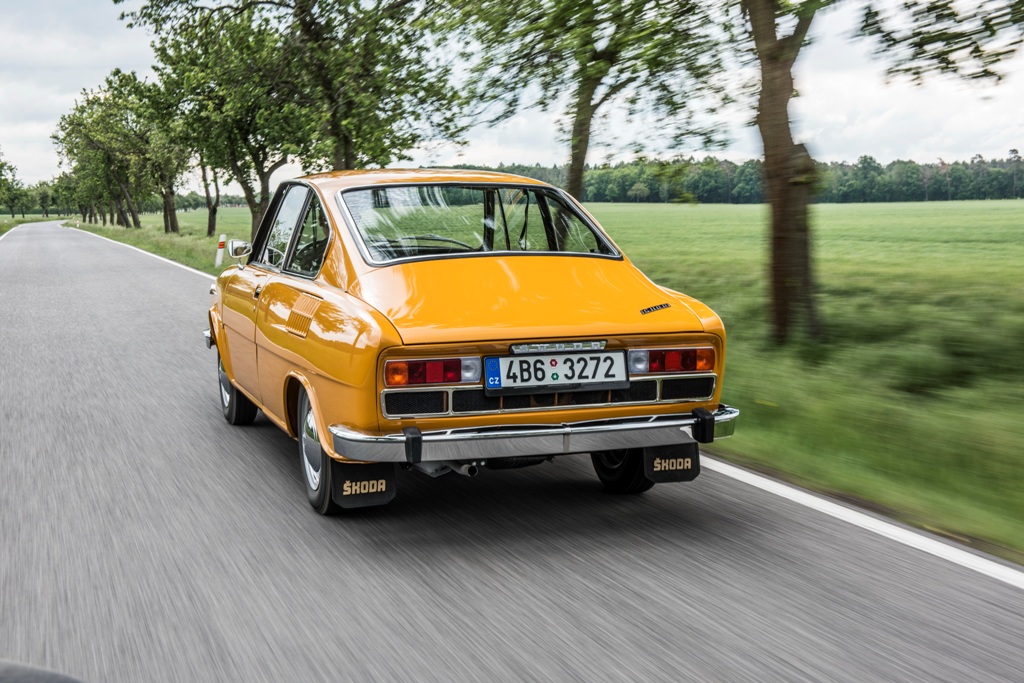 Cockpit With Comprehensive Instrumentation and Steering Wheel With Perforated Spokes

The dashboard, which featured five round instruments, was initially released with wood panelling and was soon replaced by a matt-black finish. Behind the steering wheel rim, the driver could see the large tachometer, with the red zone starting at 5,750 rpm, and the adjacent speedometer, which was equally large. Three smaller round instruments were mounted towards the centre of the dash: the pressure gauge to indicate the oil pressure and the temperature gauge for the coolant and, on the far right, the fuel gauge. The steering wheel had two perforated metal spokes which ran towards a rubberised baffle element in the middle. The 110 R’s extensive basic equipment included anatomically shaped front seats. By folding the backrests forwards, the two rear seats, which were considerably smaller, could be reached. Over the ten-year construction period from 1970 to 1980, the ŠKODA 110 R underwent numerous minor revisions, which, coupled with a frequently updated appearance, ensured the long-term competitiveness of the vehicle. From January 1973, four headlights adorned the front of the car, as two smaller fog lights enhanced the two outer main headlights. The front seats were fitted with headrests, and the 14-inch wheels were replaced by smaller 165 SR 13 tyres and plastic covers shortly before the iconic coupé’s construction period came to an end. 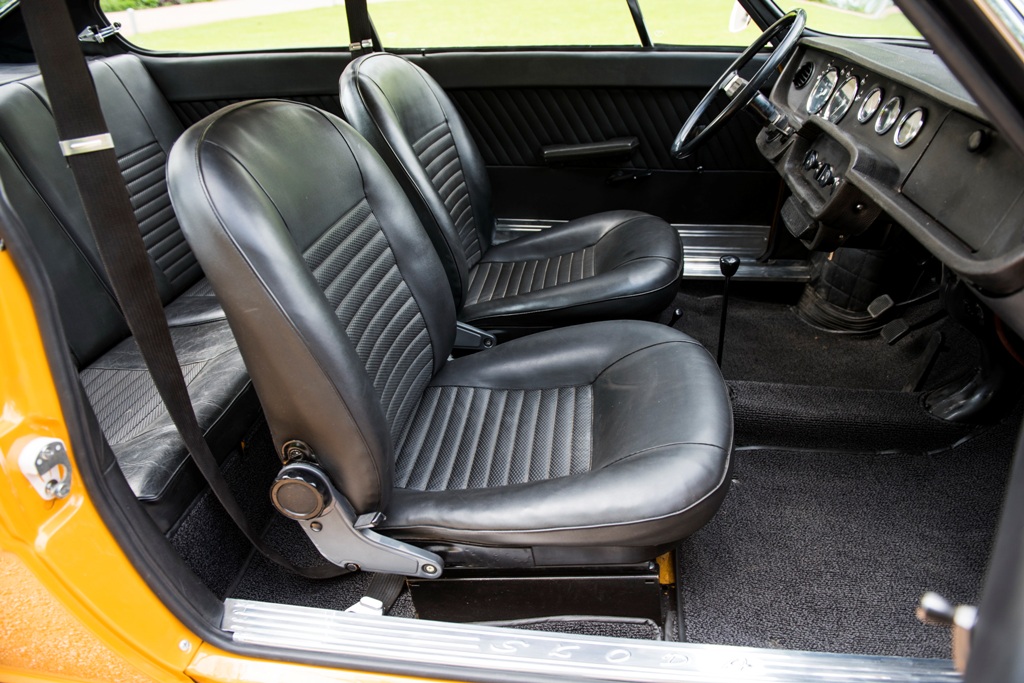 ŠKODA made an exciting new statement with the compact 110 R sports car and achieved considerable sales success with the vehicle on demanding export markets. In 1973, 93 per cent of the approximately 6,000 coupés built were shipped outside of what was then Czechoslovakia. In the following year, production rose to around 7,500 units. From September 1972, ŠKODA also exported a right-hand drive version, and just three years later, 2,371 coupes or 36 per cent of the total number of vehicles exported went to customers in Great Britain. Some units of the 110 R even reached New Zealand, Kuwait and Nicaragua. In 1980, its final production year, exports were limited to the Yugoslav and Spanish markets.

Motorsport Derivatives of the ŠKODA 110 R: The Beginning of a Successful Era

The international demand for the 110 R was also boosted by the success of the ŠKODA coupe’s motorsport derivatives on circuits and rally courses, which began in the 1973 season with a modified factory car. A little later ŠKODA presented a 180 RS and two examples of the 200 RS. The prototypes inspired by the series coupé made their debut at the Barum Rally in June 1974. These road racing cars had OHC engines with a capacity of up to two litres and a five-speed gearbox made by Porsche. Also, a newly developed trailing arm rear axle was installed, which had a positive effect on the coupés’ handling. 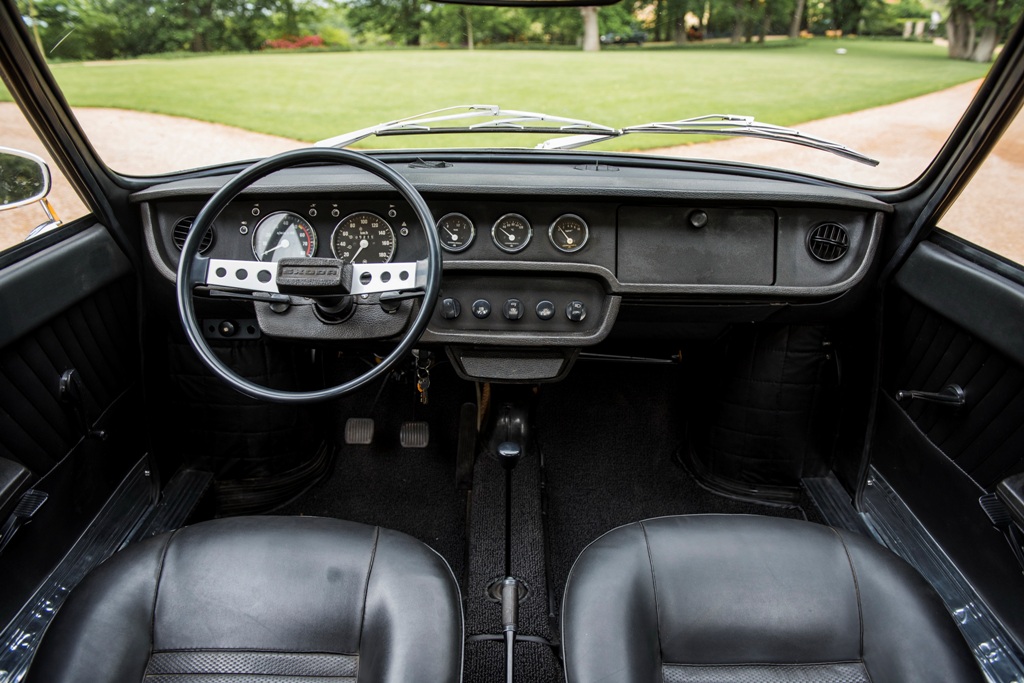 The legendary ŠKODA 130 RS followed in spring 1975. It would become one of the most successful racing and rally cars in the <1,300 cc class in the late 1970s and early 1980s. The 110 R’s body structure was slightly modified, and a robust roll cage was added. ŠKODA made the roof, bonnet and outer skins of the doors from aluminium, while the fenders and bonnet were made from glass fibre reinforced plastic. These lightweight construction measures reduced the weight of the 130 RS to just 720 kilograms, making the 1.3-litre four-cylinder model comparatively easy to handle. Its output gradually increased to 96 kW (130 hp); the engine with dry-sump lubrication was fitted with an eight-channel cylinder head and two Weber twin carburettors. The racetrack version reached a top speed of up to 220 km/h. The 130 RS, also known as the ‘Porsche of the East’, won the Manufacturers’ Ranking of the European Touring Car Championship for ŠKODA in the 1981 season. The double victory in its class at the 1977 Monte Carlo Rally is considered the rally version’s greatest success.

By 30 December 1980, ŠKODA had produced a total of 57,085 units of the series version of the dynamic coupé 110 R at the Kvasiny plant. Preserved vehicles are now sought-after collector’s items with a steadily increasing market value. The ŠKODA GARDE, a coupé also produced at the Kvasiny plant, succeeded the ŠKODA 110 R in September 1981. The GARDE was based on the notchback series 105/120 and, drawing on the brand’s experience from motorsport, was equipped with a semi-trailing arm rear axle with semi-axles, precise rack-and-pinion steering and front seats with integrated headrests. From spring 1982, the GARDE was also built at the BAZ car plant in Bratislava. From 1984 to 1990 the RAPID, which could reach speeds of up to 150 km/h, continued ŠKODA’s coupé tradition, which had begun in 1970 with the 110 R. In its highest specification level, the last ŠKOD, A coupé with a rear rear-engine four-cylinder engine with a capacity of 1.3 litres and a five-speed gearbox.

Peugeot and Total to Kick off Their Le Mans Hypercar Project

Niva Returns to the Lada Family