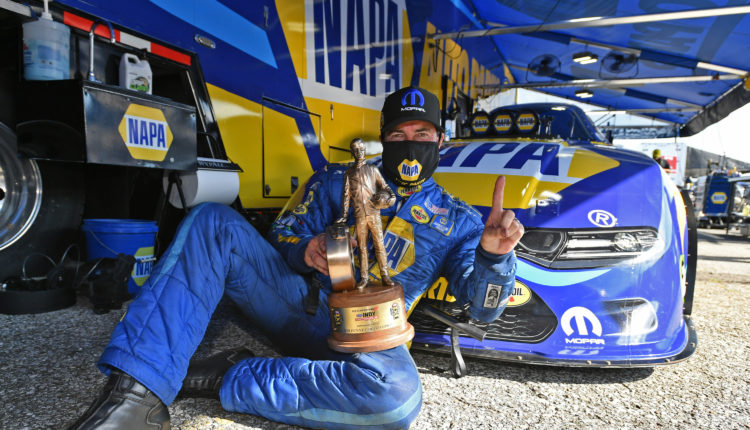 There was only one track in Ron Capps’ storied 26-year career where a national event victory had eluded him. Still, the Don Schumacher Racing (DSR) veteran Funny Car driver finally checked the historic Indianapolis dragstrip off that list by driving his HEMI®-powered Dodge Charger SRT Hellcat to the winner’s circle at the Dodge NHRA Indy Nationals presented by Pennzoil.

“Leave it to 2020 to get my first win at Indianapolis,” said Capps of the emotional and long-awaited victory. “For a driver to be able to say that he’s won at every track on the (NHRA) circuit is pretty incredible, and it shows you the talent that I’ve had around me since I started my career.”

“For Dodge to jump in and to win a Dodge race for them and Pennzoil, means something,” adds Capps. “This is hallowed ground, and I really started to wonder if I would ever win here. It may not be the U.S. Nationals, but maybe we broke the yolk. This is still a place that has so many great memories and such a great rich history.”

After qualifying third, Capps drove his HEMI-powered ride through eliminations with wins over Tim Wilkerson, Blake Alexander, and Bob Tasca, earning lane choice along the way over his final-round opponent, J.R. Todd and then his first win of the year. It was Capps’ first final round appearance since his 2019 win at Brainerd.

Capps’ 64th career Funny Car victory, second only to John Force (151) on the all-time win list, was earned at the third Indianapolis-based event since the National Hot Rod Association (NHRA) Mello Yello Drag Racing Series’ returned to racing following a four-month hiatus due to the on-going pandemic, and saw the 2016 world champion bounce back from a pair of disappointing first-round losses to DSR teammates in the first two events. 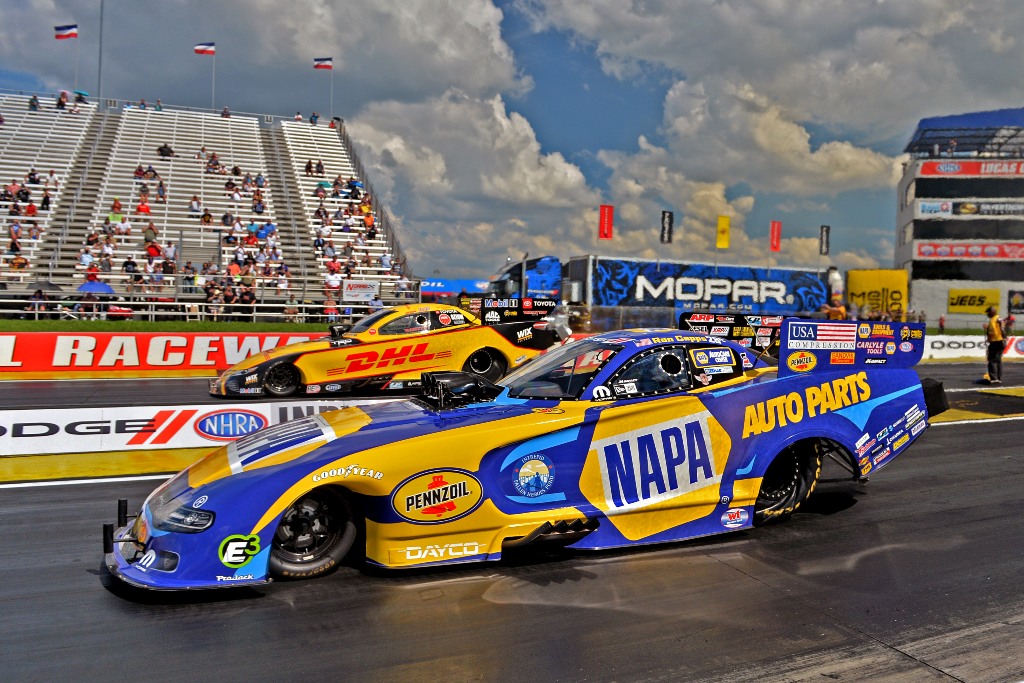 “The last two weeks were hard with these two races here,” says Capps who jumped up two positions to fourth place in the championship points battle. “After the break, we came back and knew that we were on limited time to make a run in the points. We came back from the hiatus, and I didn’t get a whole lot of laps in the car. We didn’t get to do a whole lot of testing as some other teams did. The one saving grace is that I’ve got a great team and (Rahn) Tobler gives me a great car, so that helped. I just haven’t had a whole lot of confidence mainly because we haven’t had a whole lot of runs. We’ve been knocked out first round, so this helped me a bunch. This was a feel-good weekend on many different fronts; my confidence is back, and Tobler found his racecar.”

With the win, DSR extends a streak of nine consecutive final-round appearances for one of their Dodge Charger SRT Hellcats that dates back to September 2019 (Charlotte) and puts the team just one victory away from an unprecedented NHRA milestone of 350 national event wins.

The DSR Dodge Charger foursome is also now 1-2-3-4 in the Funny Car championship points standings with each driver having earned a Wally (trophy) of their own this year to date (and one rain postponed final (Indy 2) between Matt Hagan and Jack Beckman yet to be run during the U.S. Nationals.) 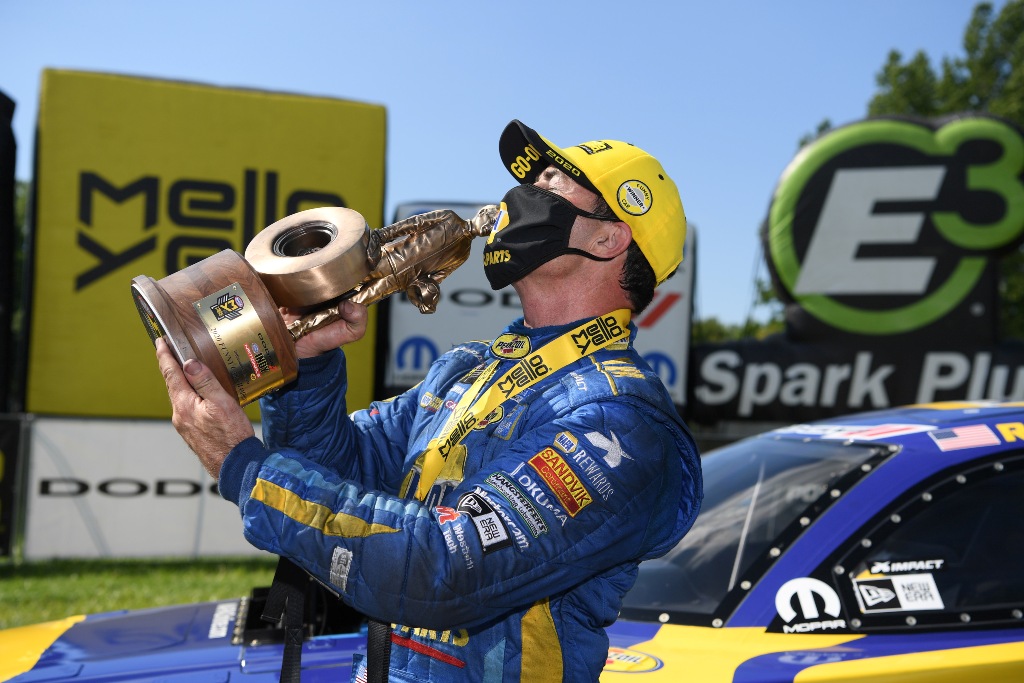 Taking over the lead in the championship chase from teammate Beckman is Tommy Johnson Jr. who came into race day with a win (Phoenix) and his second No. 1 qualifier position in three races aboard his MD Anderson Dodge, but fell short of adding more points to his lead after a quarterfinal loss to Paul Lee.

Seeded second for eliminations, Hagan and his Mopar Dodge Charger SRT Hellcat Redeye remain third in the standings after a first-round win over Beckman but encountering a setback in the quarterfinals with a loss to Bob Tasca.

After advancing to the final round of eliminations in three of four national events this season, Beckman’s difficulties in qualifying put him at a disadvantage for the first time this year with a 15th place on the eliminations ladder. His first-round loss dropped him into second place in the Funny Car championship battle from his position as points leader which he had held since the start of the season. 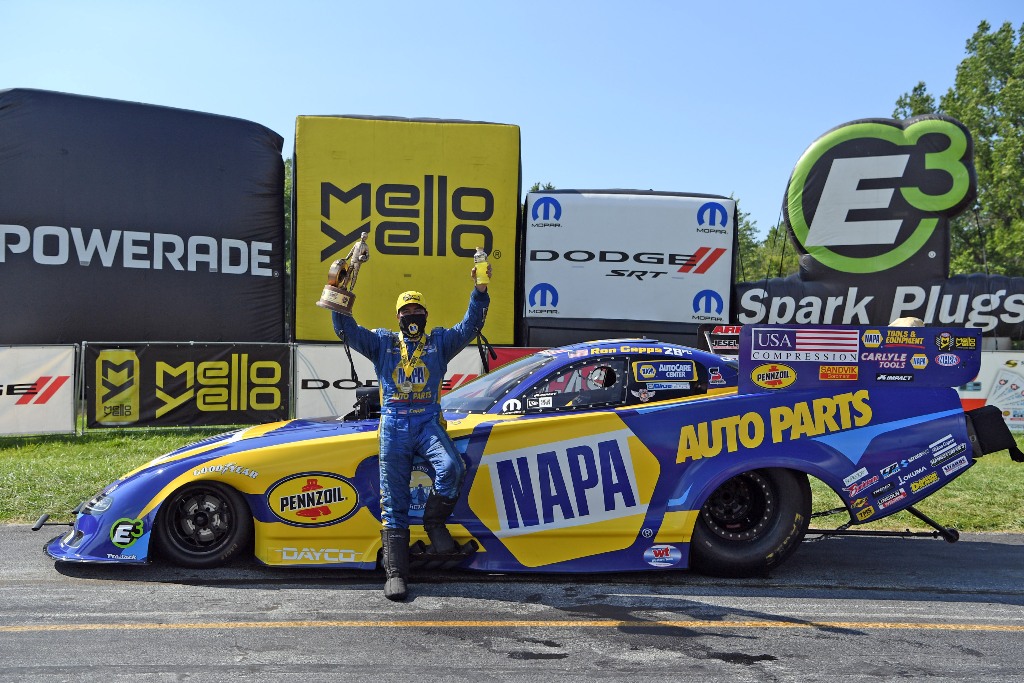 In Top Fuel competition, Leah Pruett drove her demon-red, black and chrome Mopar Dodge SRT Hellcat Redeye dragster from a No. 3 seeded position on the eliminations ladder through to a semifinal matchup against Steve Torrence after victories over Shawn Langdon and Pat Dakin. It was her third semifinal appearance this season, and while she is still chasing a win this season, Pruett is third in the Top Fuel rankings.

The next scheduled events on the ever-changing calendar are the NHRA Southern Nationals, slated to take place in Atlanta, Ga, on Aug, 28-30, followed by the prestigious NHRA U.S. Nationals in Indianapolis on Sept. 3-6.