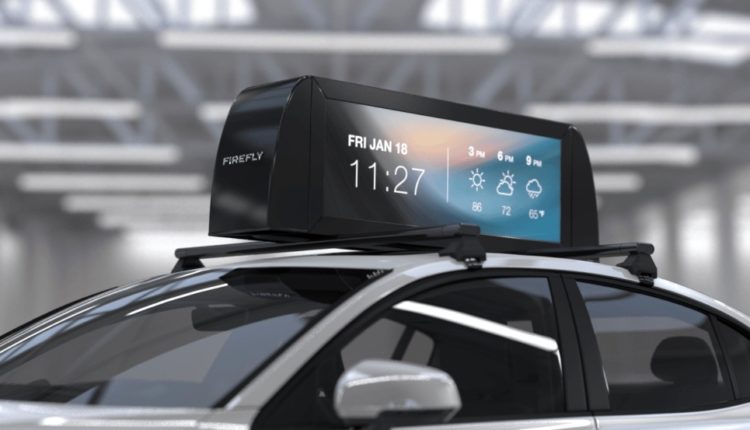 This April, starting in Atlanta, Uber will introduce what it calls a “new omnipresent advertising network that cuts through the clutter with street-level engagement.” In other words, it plans to blast ads at passersby with digital screens atop its drivers’ cars.

With the move, dubbed Uber OOH—short for out-of-home, the term for advertising that includes billboards and the like—the company is jumping into a market pioneered by a handful of startups. The largest of these, Firefly, has installed digital screens on thousands of cars in Chicago, Dallas, Los Angeles, Miami, New York, and San Francisco. Lyft may be moving into space too: It recently acquired Halo Cars, a Philadelphia-based startup that offers car-topping ad screens, Axios reported last week.

Uber’s ad program will begin in April in Atlanta, Dallas, and Phoenix. It will start with 1,000 cars and pay drivers $300 to install the screen, which is about 4 feet long and sits atop a roof rack. Drivers will get $100 for each week they drive more than 20 hours to start, before the model shifts to paying them by the hour, according to Adweek. That’s a bit sweeter than Firefly’s offer of about $300 a month, restricted to drivers who spend at least 40 hours a week on the road. Collaborating with ad tech company Adomni, Uber will sell the ad space by location and time of day. A Lyft representative declined to provide details on how it might use Halo’s technology.

Taxis, trucks, buses, and other vehicles have borne ads for decades, but the proliferation of gig economy workers driving for companies like Grubhub, Lyft, and Uber has turned millions of passenger cars into commercial vehicles—and potential mobile advertising platforms. Considering that Uber lost $8.5 billion last year, a business that provides a near-term return on investment has an undeniable appeal.

“This makes sense for them because there is a low cost,” says Bill Pearce, the assistant dean and chief marketing officer at the Haas School of Business at UC Berkeley. Uber has to reward drivers for participating (and Adomni will take its cut), but otherwise, the cost of displaying ads on digital screens is minimal. Plus, local businesses like car dealers and shops often pay steep rates to advertise on billboards and other out-of-home spaces, Pearce says. So for Uber, “the ROI is almost infinitely high.”

This scheme also provides an additional revenue source for drivers, whom Uber has to keep happy, without dipping into the company’s coffers. 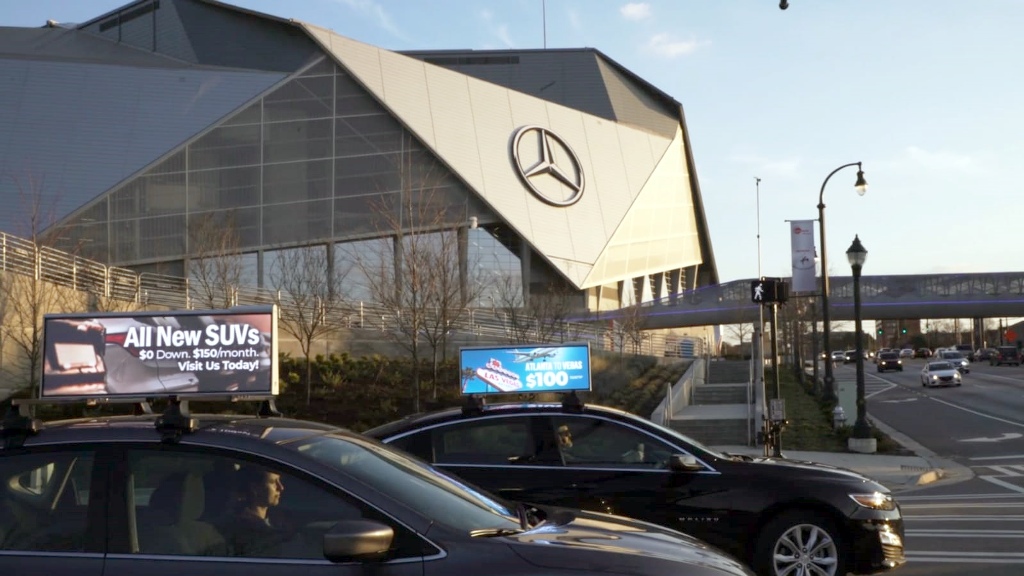 The US out-of-home advertising market was worth $10 billion in 2018, according to PwC, about one-tenth of what’s spent annually on internet ads. And it’s getting bigger: PwC predicts the digital-out-of-home market will grow 7 per cent year over year through 2023. (It’s also densely populated by Big Tech: Amazon, Apple, and Google were in the top six out-of-home spenders in the US in 2017).

The digital side is booming because light displays allow for creativity. For instance, brands can use weather data to adjust their ads, like a Dove billboard in Times Square that showed models showering when it rained. That sort of tech can make ads—which quickly fade into a viewer’s mental background—more compelling, Pearce adds.

When combined with data from smartphones, digital billboards can provide the kind of personalization that’s usually found—and not exactly welcome—online. In one case study, ad company Vistar Media says it used location data to target “comic fanboys” in promoting the home release of an unidentified movie. It identified people who often visited comic stores and events and who had gone to theatres showing the film. Then it tracked the fans and showed ads in the malls, transit stations, and other places where they tended to go. The result, Vistar says, was a 13 per cent rise in awareness and a 26 per cent rise in purchase intent.

Car-top screens could add an abundance of mobile platforms to such targeted advertising. Because Halo’s and Firefly’s monitors display ads based on the car’s location and time, a driver could haul an advertisement for a neighbourhood coffee shop in the morning and the restaurant across town in the evening. Meanwhile, the cost of the digital display has “dropped dramatically” in recent years, says Firefly CEO Kaan Gunay. 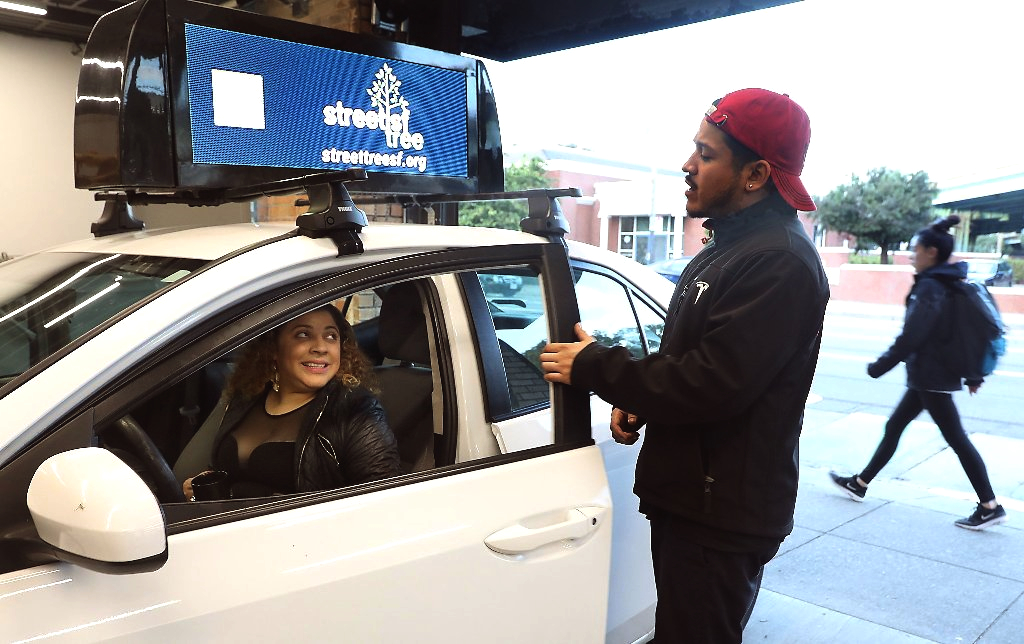 The proliferation of car-top screens could trigger pushback. Drivers have complained on Reddit about things like lowered fuel economy and radio static, although both Saleh and Gunay say they’ve made various improvements to their screens, including upping resolution and dropping weight.

And those being hit with the ads aren’t always happy. In 2016, New York senator Charles Schumer railed against “spying billboards” that collected location data from the smartphones of people passing by. When Ballyhoo Media started running a boat with huge, two-sided LED billboards around Manhattan, New York banned the practice, calling the ships a nuisance. (They sailed to Florida).

In response to Firefly’s launch in 2018, the Los Angeles City Council’s Transportation Committee voted to nix the digital displays, arguing that they violate a California law limiting their brightness. Firefly critics also call the screens ugly and distracting. 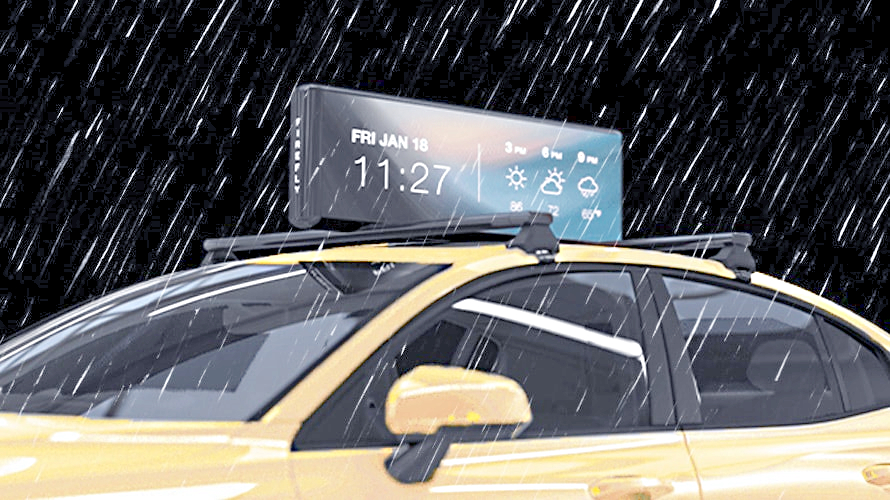 “We don’t need more distractions for drivers,” says Jeff Jacobberger, a legislative deputy for Councilmember Bob Blumenfield, who wrote the bill. The City Council is yet to vote on the bill.