Tesla CEO Elon Musk boasted this week on Twitter that his company’s forthcoming Cybertruck is a “Better truck than an F-150, faster than a Porsche 911.” He followed that claim by posting a video of the Cybertruck prototype ostensibly hauling a Ford F-150 uphill.

A Battle of Mass

It looks impressive. However, this isn’t a battle of horsepower or torque—it’s a battle of mass. As long as both vehicles have sufficiently powerful engines, the heavier one will win. Why? Because it’s all about friction, where the rubber hits the road. The Tesla Cybertruck, with its steel shell, is probably more massive than an F-150—and, for environmental and other reasons, that’s not necessarily a good thing. Friction is pretty complicated. You have all of these atoms on the surfaces of two objects that are interacting with each other—that’s not so simple.

The friction coefficient is a unitless value, usually between 0 and 1, that depends on the specific materials that are in contact. Steel on ice has a low coefficient, so it’s easy to push a sled on ice. Tire rubber on asphalt has a much higher value, somewhere around 0.7. But, what does all this have to do with the mass of a pickup truck? Suppose I have a truck that’s pulling another truck. Here is a force diagram for such a situation.

In the video, the Cybertruck has a rope attached to it. This rope pulls with some tension force to the right, and the friction between the Cybertruck’s tires and the ground push to the left. The frictional force must be at least a little bit greater than the backwards-pulling tension, so that the truck can accelerate (and start to move). But here you can see the key point. More mass means a greater normal force, which in turn produces a greater frictional force. Mass matters.

What about on an Incline?

it is harder to win this contest if you’re pulling uphill—but mass still matters the most. Here is a diagram of a Tesla truck pulling a load up a hill: 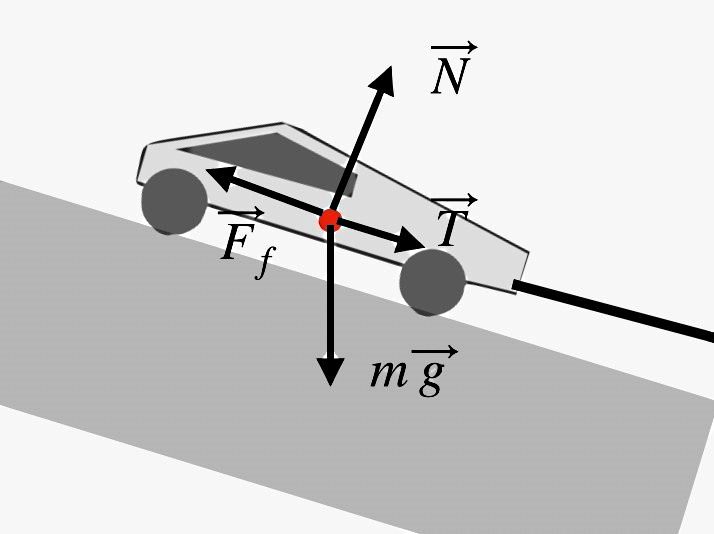 What’s Different in This Case?

Since the truck is on an incline, only part of the gravitational force pushes the truck into the road. That means the force with which the road pushes back also has to be smaller. With a smaller normal force, you get less friction.

What Are the Deciding Factors?

Now part of the gravitational force is pulling in the direction of the tension in the rope. The lower frictional force has to be equal to the sum of the rope’s pressure and the component of gravity that’s parallel to the road. So this tug-of-war is much harder to win. As long as you have a strong enough engine, friction and the mass of the vehicle are still going to be the deciding factors.

It seems like the Tesla Cybertruck incorporates a host of innovative concepts. I don’t see any value behind making a demo like this tug-of-war, though, to show that it’s heavier than an F-150.