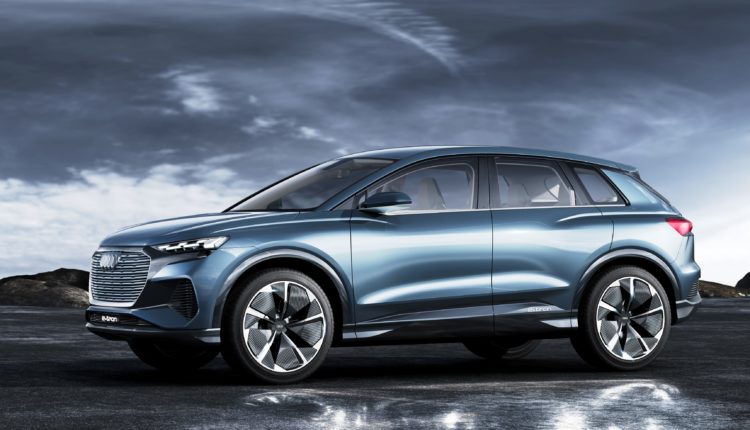 It has been roughly a year since the first series production Audi with electric drive made its debut at the same location: The Audi e-tron* was still covered in camouflage wrapping foil at that point. The brand with the four rings is now giving an advance look at a further automobile with an all-electric drive at the Geneva Motor Show: The Audi Q4 e-tron concept is a compact four-door SUV with an exterior length of 4.59 meters whose relation to the Audi e-tron is apparent at first glance.

Two electric motors mobilise 225 kW of system power in the Q4 e-tron concept. As is typical for Audi, the driving force of the concept vehicle is brought to the road with Quattro all-wheel drive. Thanks to excellent traction, it accelerates from zero to 100 km/h in just 6.3 seconds. It reaches its maximum speed at an electronically limited 180 km/h. A large battery with a capacity of 82-kilowatt-hours takes up almost the entire space in the underbody area between the axles. The range of over 450 kilometres – in line with the WLTP standard – sets the benchmark in its class. The technology of the Q4 e-tron concept controls the modular electrification platform (MEB) that will be integrated into numerous electric vehicles produced by the Volkswagen Group in the future, from the compact class to the superior medium-size category.

The Audi Q4 e-tron concept gives an advance look at what will already be the fifth series production electric vehicle that the manufacturer will introduce by the end of 2020. Sales of the Audi e-tron have already started, and the first vehicles will be delivered to the customers before the end of March 2019 in Europe. Later this year, the Audi e-tron Sportback will be presented, and the Audi Q2L e-tron, which was designed specifically for the Chinese market, will roll off the assembly line. The presentation of the production version of the four-door high-performance coupé Audi e-tron GT, which is being developed at Audi Sport GmbH, is planned for the second half of 2020. The compact Audi Q4 e-tron is to make its production debut at the same time. With this offer, Audi now covers all important market segments with all-electric drive vehicles, from the A segment to the full-size class, just under two years after the launch of the first electric car.

Compact on the outside, spacious on the inside: dimensions and interior

4.59 meters long, 1.90 meters wide, 1.61 meters tall: With its aspects, the Audi Q4 e-tron concept takes its position in the upper third of the compact class. Its road space requirements thus qualify the electric SUV as an agile all-rounder that is suitable for city driving as well. In terms of the interior, by contrast, its wheelbase of 2.77 meters puts it at least one class higher. As there is no transmission tunnel restricting the space, the Q4 e-tron concept offers unsuspected spaciousness and comfort, especially in terms of legroom both at the front and in the rear.

The Q4 e-tron concept is identifiable as an Audi at first glance by the Singleframe with the brand logo, the four rings. And it will take no more than two glances to see that this is an electric Audi e-tron: Like the first production Audi with electric drive, the new concept vehicle also features a structured closed surface within a broad, almost upright octagonal frame in place of a traditional radiator grille. Air is supplied via large inlets that extend from below the two matrices LED headlights down to the front apron.

The prominently modelled fenders of all four wheels are a further classic Audi design feature that distinguishes the brand. The widened features of the Q4 e-tron concept are designed to be highly organic and flowing, and they add a unique touch to the side view. The accentuation of the rocker panel area between the axles, where the battery and thus the powerhouse of this SUV is located, is a typical feature of the e-tron. Large 22-inch wheels leave no doubt about the potential of the Audi e-tron concept. Its roofline slants down slightly toward the back, giving the silhouette a particularly dynamic look.

Finally, the body paint in “Solar Sky,” a shade of blue that changes depending on the angle of the light, is a sustainable innovation in two senses: The paint, which was developed specifically for the Audi Q4 e-tron concept and produced under environmentally friendly conditions, effectively reflects a short-wave fraction of sunlight, near the infrared spectrum. This reduces the build-up of heat on the surface of the body and the interior significantly. This benefits the subjective well-being of the occupants while at the same time reducing the energy input required for the air conditioning, which is then not needed as much to cool the vehicle interior on warm days. This, in turn, improves the range and the global carbon footprint of the Q4 e-tron concept.

The brand with the four rings launched its electric offensive with the world premiere of the all-electric SUV Audi e-tron in September 2018. By 2025, Audi will offer twelve automobiles with all-electric drive in the most important markets worldwide and achieve roughly one-third of its sales with electrified models. The SUVs within this portfolio include the e-tron and the e-tron Sportback due to make its debut in 2019. Also, there will be a range of models with classic body layout such as Avant and Sportback. The range will cover every relevant market segment from the compact class to the luxury class.

The Audi e-tron GT concept show car, a highly dynamic coupé with a low floor, made its debut at the Los Angeles Auto Show 2018. The technology in this automobile was developed in collaboration with Porsche; the design and character of the e-tron GT concept are packed full of unmistakable Audi DNA. The project will be developed into volume-production models by the end of 2020.

The Premium Platform Electric (PPE) is a unique joint project of the development departments at Audi and Porsche. It will be the foundation for multiple Audi model families with all-electric drive covering the high-volume B through D segments.