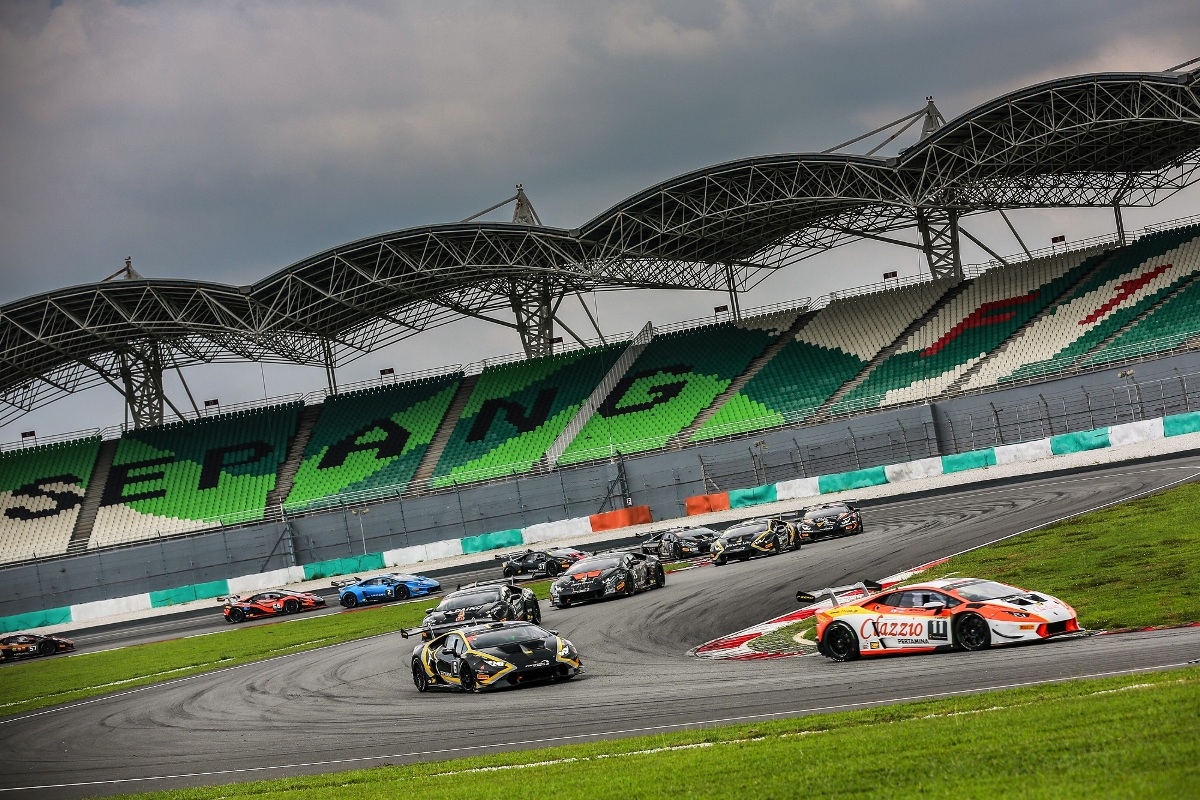 Back in Sepang for race two of the first round of the 2017 Lamborghini Super Trofeo Asia Series, another thrilling day of racing action was enjoyed by drivers and spectators alike at Malaysia’s revered International Circuit. Teams once again took to the track to do battle for the podium, while enthusiasts and fans gathered to watch the races and catch a glimpse of other events taking place at the track over the weekend, such as the Blancpain GT Series Asia, which saw a number of Lamborghini Huracán GT3 competing. 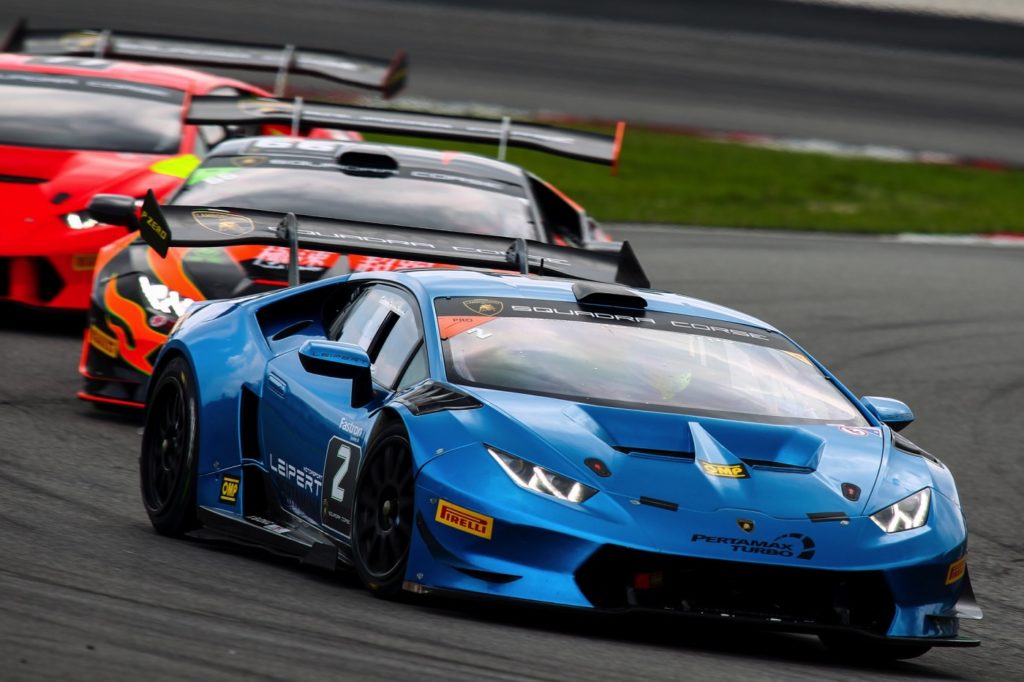 One of the highlights of the afternoon pre-race was a stunning Lamborghini customer car parade, where local car owners were invited to bring their prize bulls to the track to showcase the beauty and instantly recognisable Italian style which is Lamborghini. With a mixture of both modern and retro classics on show, such as the Aventador and Diablo models, enthusiasts took time to admire the visionary road cars produced by the legendary Sant’Agata carmaker.

The second of two qualifying sessions on Saturday, held just 10 minutes after the first, was again favorable for Clazzio Racing, who once more took pole position for race two, both drivers showing confidence in their abilities on the Malaysian circuit; local Squadra Corse Young Driver’s Program graduate Afiq Yazid and teammate Cozzolino Kei of Japan clearly on form at the start of the Super Trofeo racing season. Sharing with them row one this time was X-One Racing Team drivers Antonio D’Amico of Italy and his teammate Nicolas Costa of Brazil, up from fourth on the grid in race one. Again, third on the grid was Polish driver Artur Janosz of Lazarus Racing Team and Meindert Van Buuren from the Netherlands, while in fourth was Carrie Schreiner of Germany with Australian teammate Richard Goddard with FFF racing Team, up from ninth in race one. 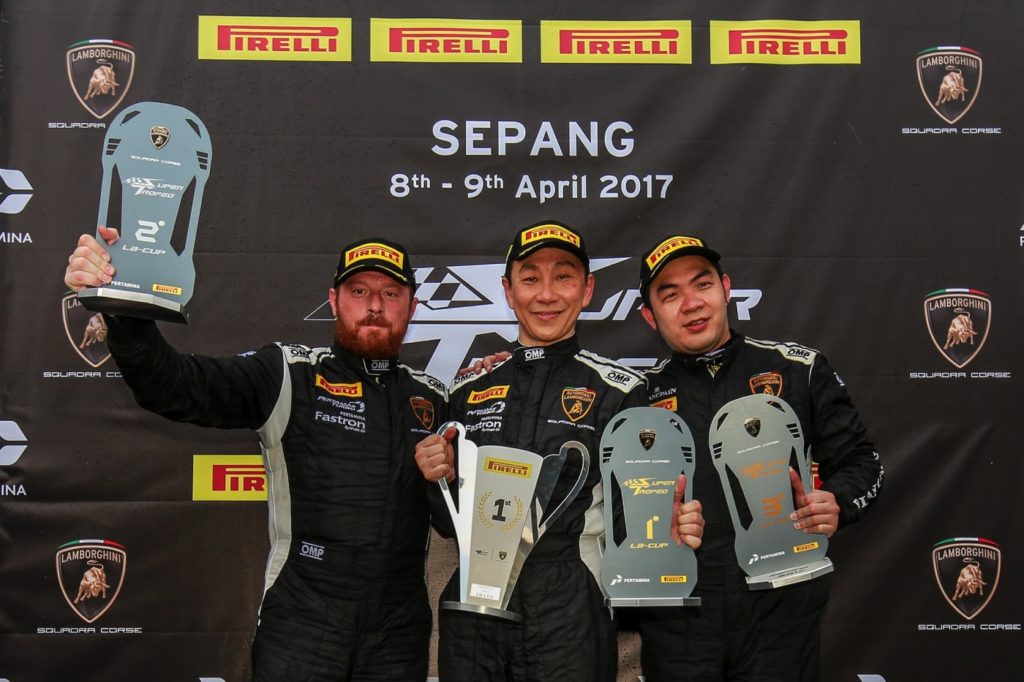 Among the AM teams, X-One Racing Team’s Andrew Haryanto of Indonesia placed fifth on the grid, up from sixth, followed by George Chou and Samson Chan of Taipei and Hong Kong respectively, together in tenth up from eleventh in the previous race, with Thai brothers Sarun and Saravut Sereethoranakul of PSC Motorsport starting eleventh on the grid, down from eighth in the last race. Among the Lamborghini Cup competitors, Supachai Weeraborwornpong from Thailand with Top Speed Racing began to twelfth on the network, up from fourteenth the previous day, followed by Petri Corse’s Gabriele Murroni from Italy in thirteenth, with Bill Ng of Singapore for Tedco racing in fourteenth and Michael Choi and Keith Chan both from Hong Kong now starting from the back of the grid.

With an earlier race time on Sunday than the previous day, track temperatures higher and moisture levels down considerably with no rain imminent, slicks were to be the choice of all for the duration of the race. After a rolling start, the pressure was on immediately as all drivers went full throttle down the straight and the Huracán Super Trofeo race cars screamed past the spectator stands. 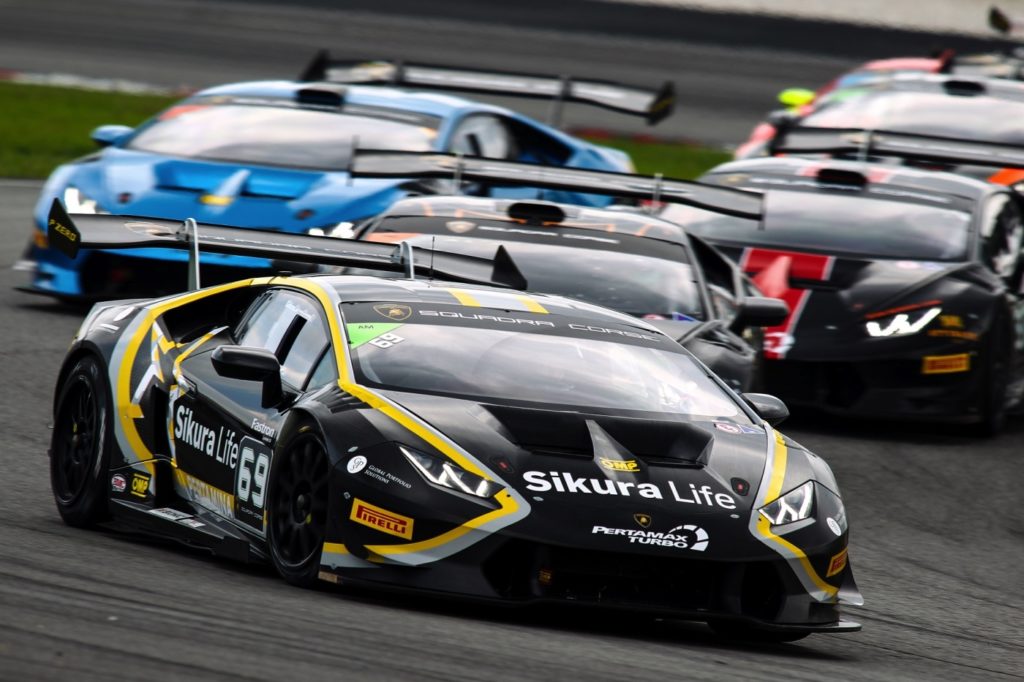 In the first lap, Leipert’s Pro-Am team driver Max Ebenal from Canada was able to get past Haryanto, moving up into fifth overall, while further back in the lineup Ng overtook Murroni to go into thirteenth overall. In a spate of bad luck between laps two and five, Weeraborwornpong lost three places, first to Ng then Murroni, followed by Choi. Meanwhile back at the front of the pack and also during lap five, Van Buuren snatched second away from Costa, who then in lap six dropped right down to ninth overall due to an unforced error. This allowed Goddard to take third. By lap eleven, Costa had managed to regain three places and was now back up in sixth place.

The compulsory pit window saw the teams swap drivers for the second part of the race and pushing hard to make up places. By lap fifteen, Yazid of Clazzio was in pole, followed by Janosz in second and Schreiner in third, with Indian driver Armaan Ebrahim with FFF Racing’s Pro team in fourth overall. Rik Breukers from New Zealand, representing GDL Racing Team moved up into fifth, past Mikko Eskelinen from Finland and D’Amico who went into sixth and seventh respectively. In lap sixteen, Ebrahim and Breukers moved past Schreiner who slipped into fifth, while Australian Ben Gersekowski and Haryanto moved past Ebenal and into seventh and eighth position, the top three spots now held in order by Yazid, Janosz and Ebrahim.

The as the chequered flag fell, the leaders held their positions, with Clazzio’s Afiq Yazid taking pole followed by Artur Janosz with Lazarus in second and FFF Racing Team in third with Armaan Ebrahim. In the Am class, it was again X-One Racing Team’s Andrew Haryanto taking the win, followed by PSC Motorsports’ Sereethoranakul brothers moving up on the podium into second after the previous day’s third place, and Top Speed Racing’s Chou and Chan in third. Among the Lamborghini Cup class drivers, Tedco Racing’s Bill Ng took the win, with Gabriele Murroni of Petri Corse in second and Top Speed Racing’s Weeraborwornpong move down to third on the podium after yesterday’s cup win.

The Sepang race weekend is the first of six Super Trofeo Asia series race fixtures this season, with the next four rounds to be held at some of Asia’s most prestigious race tracks, while round six and the World Final will be held at Italy’s Imola circuit. 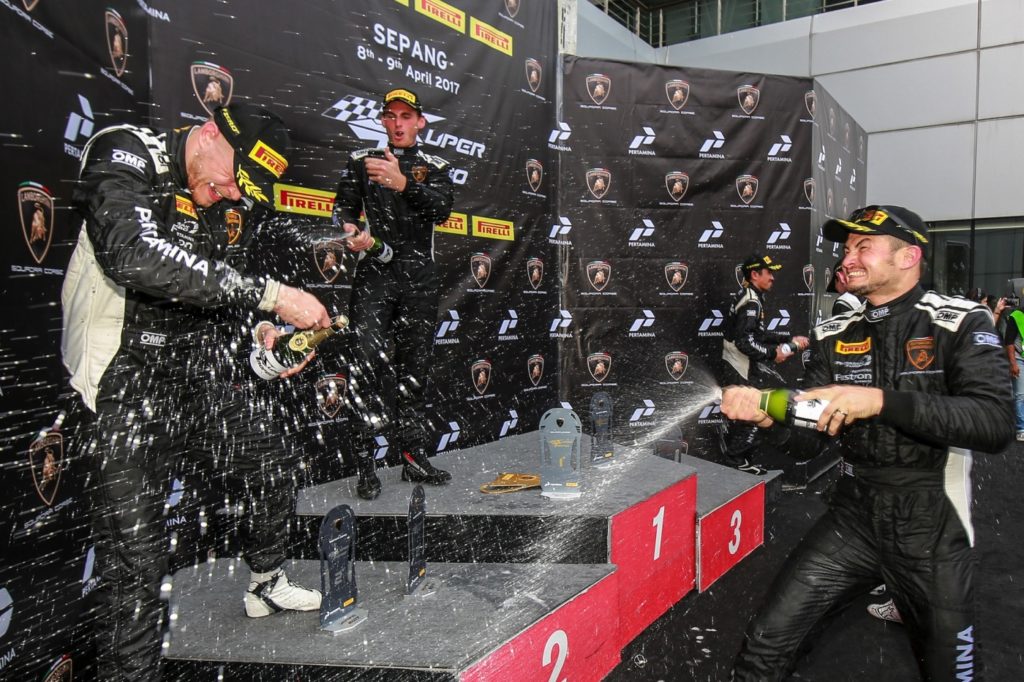 With the weekend’s action now coming to a close, drivers and teams will be eagerly anticipating round two of the championship taking place on May 20 and 21 at the Buriram International Circuit in Thailand. 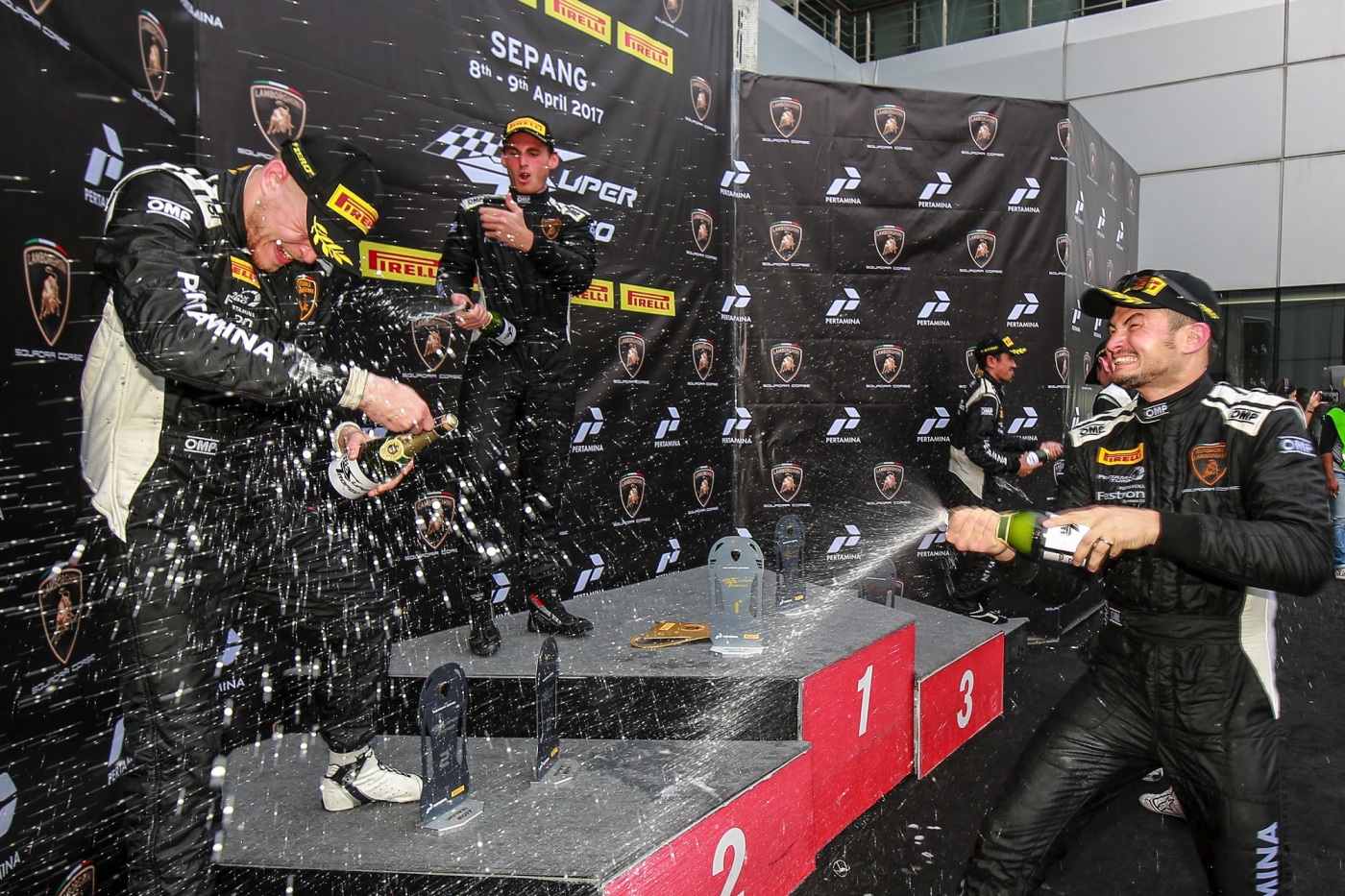 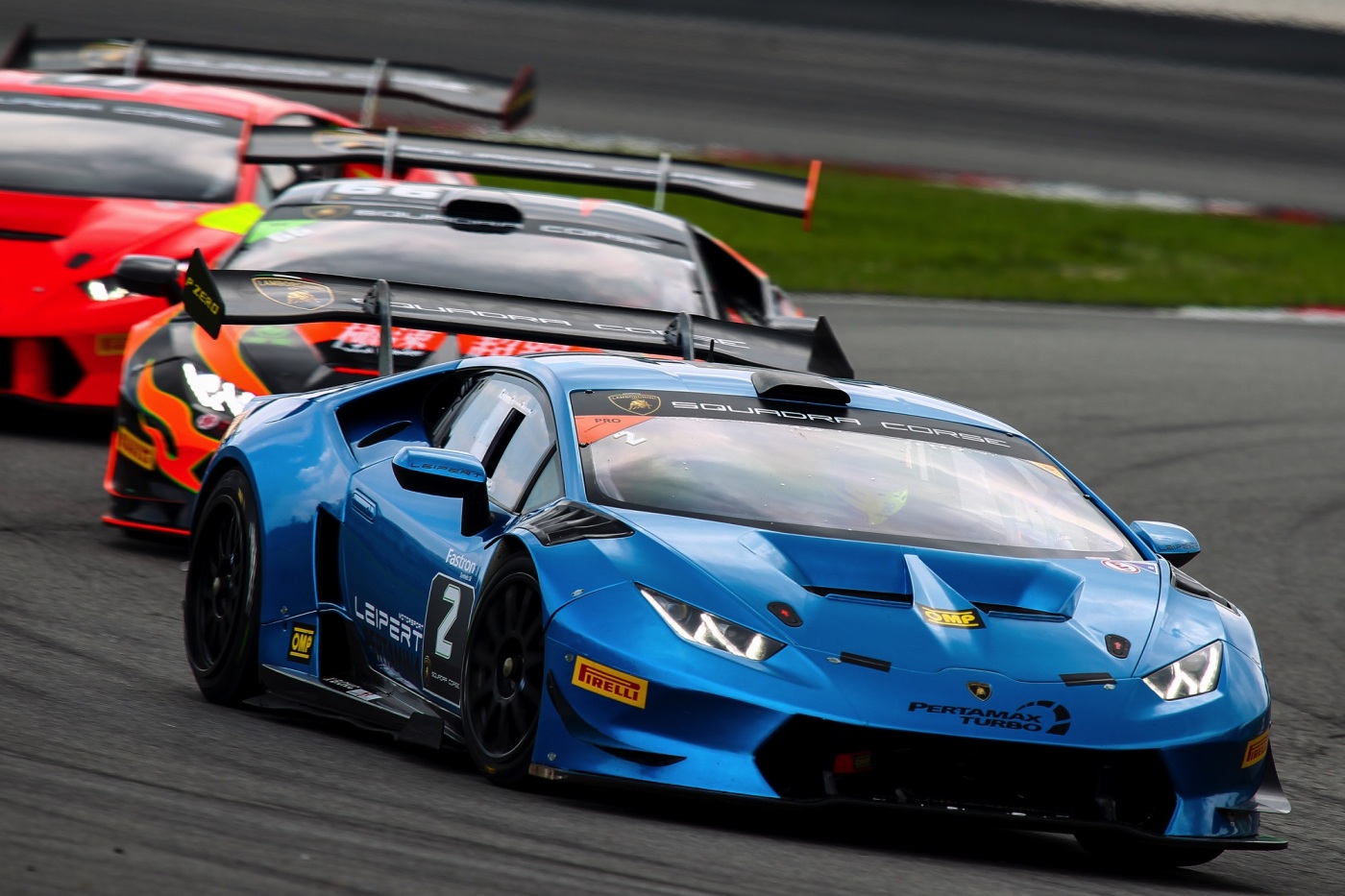 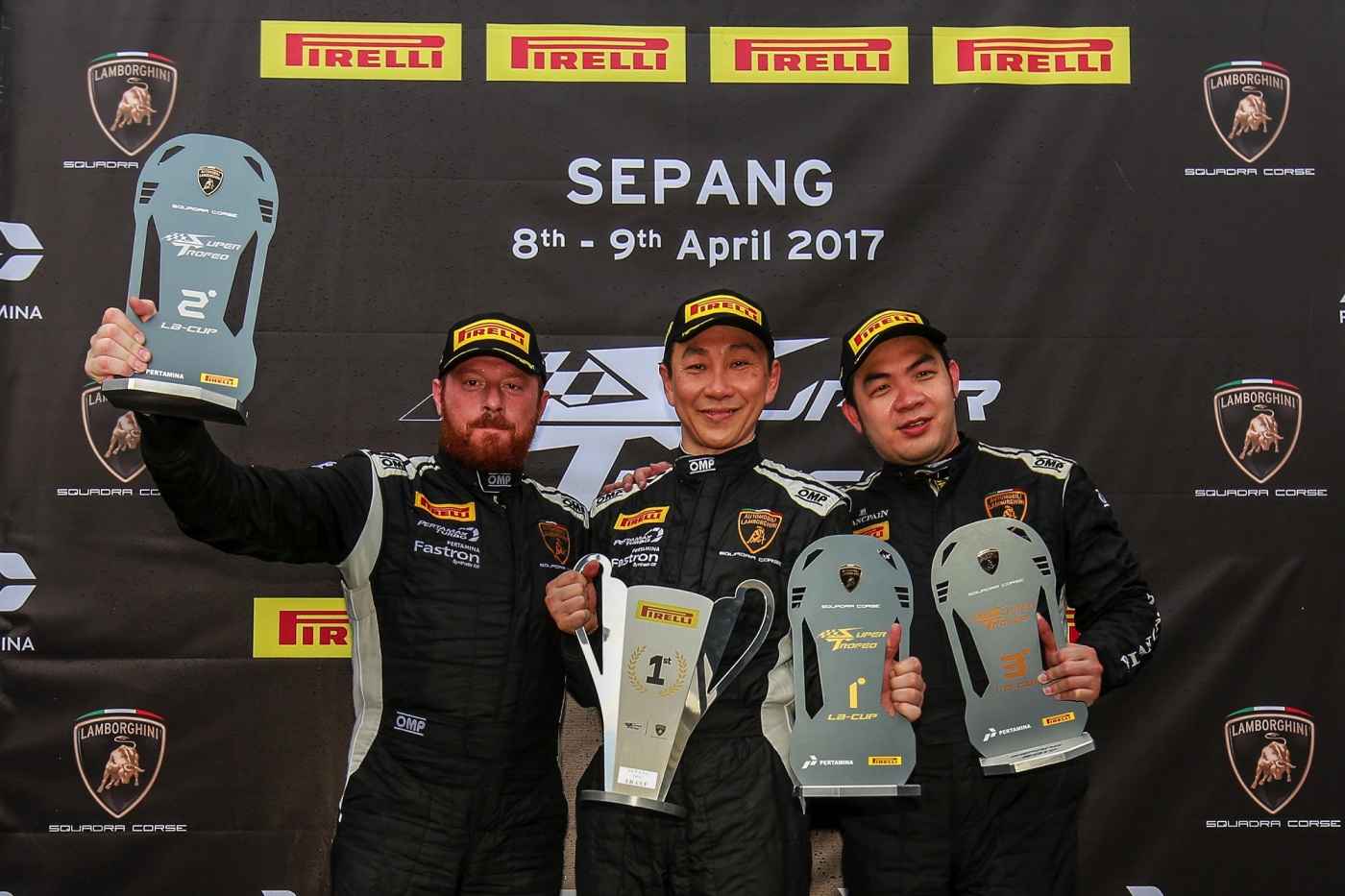 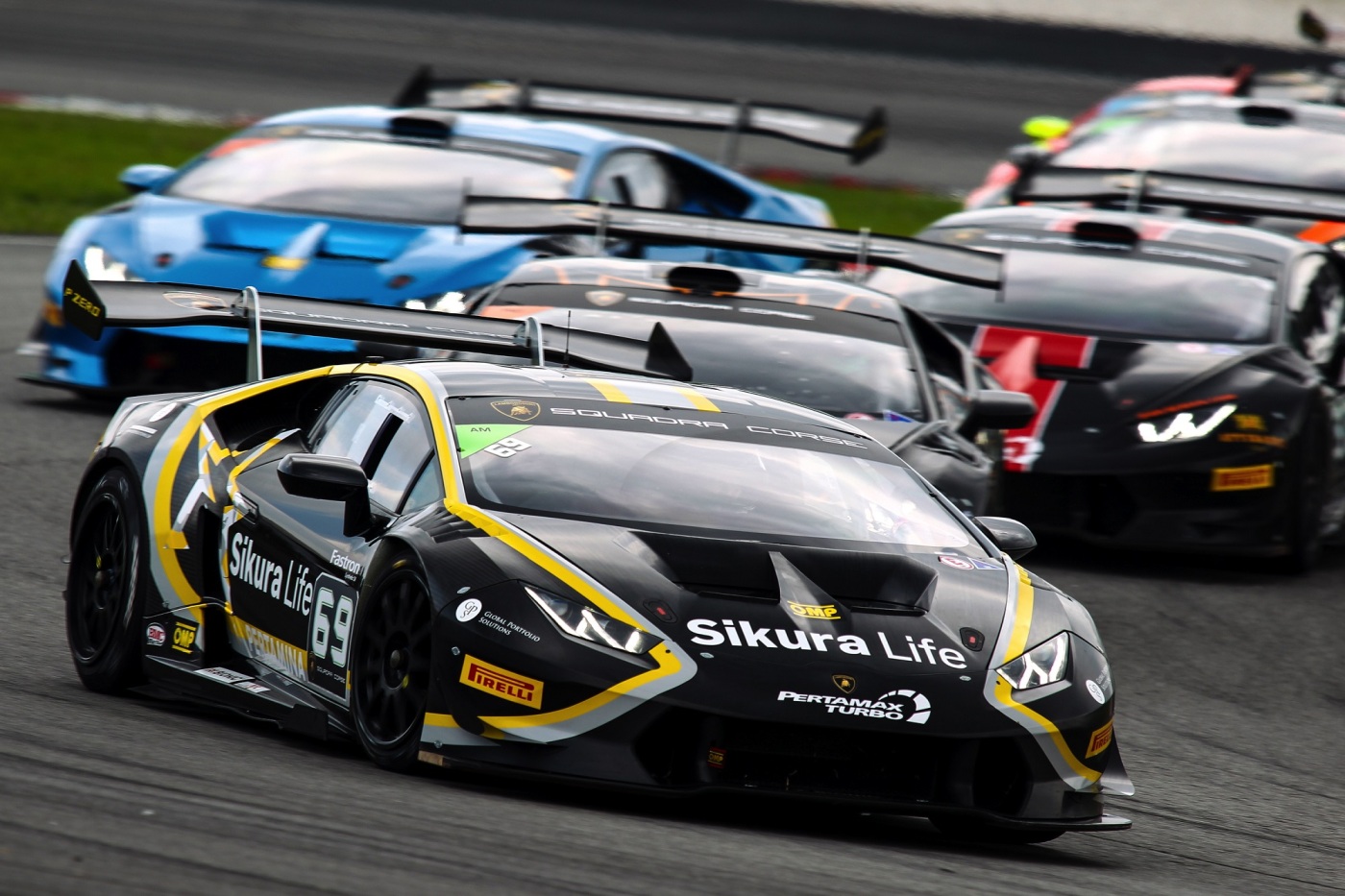 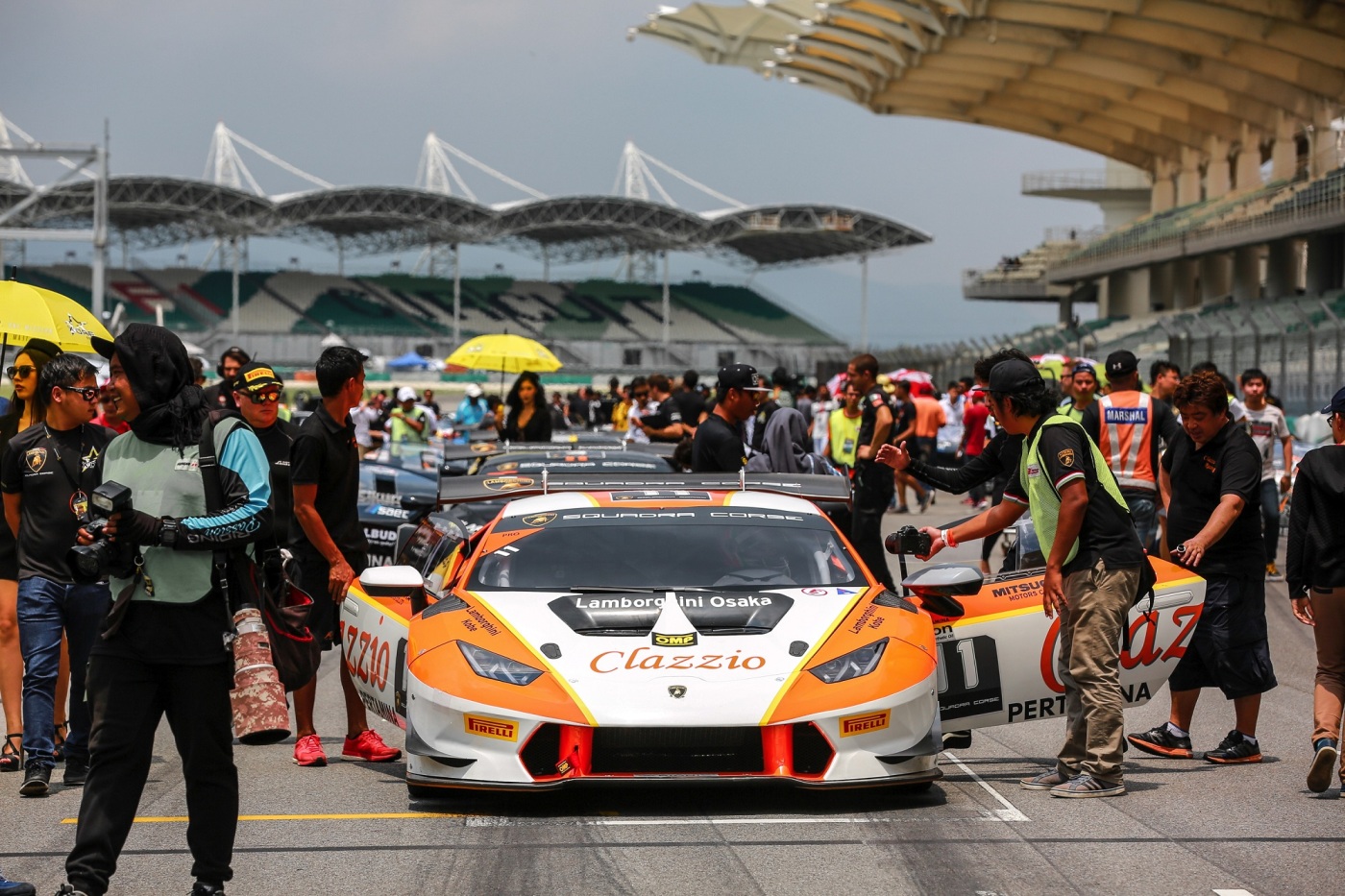