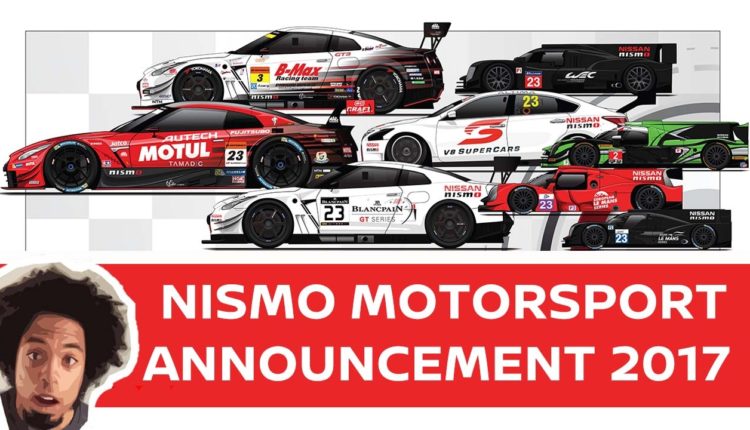 The 2017 motorsport season is about to start, and on behalf of Nissan, Takao Katagiri, CEO and president of NISMO, has now officially announced Nissan/NISMO’s motorsport activities for 2017.

Having won the SUPER GT GT500 Championship two years in a row in 2014 and 2015, but missing out on a third consecutive title after leading the championship until the last event in 2016, NISMO will be back at the track with the driver pairing of Tsugio Matsuda and Ronnie Quintarelli in Nissan’s ace car #23.

Fresh from the GT300 class, GT Academy graduate Jann Mardenborough will step up to GT500, making his GT500 debut with TEAM IMPUL together with teammate Hironobu Yasuda. For the first time in seven years, João Paulo de Oliveira will return to KONDO Racing, which took two victories last year, and will team up with Daiki Sasaki. MOLA will continue with the same strong driver combination from last year, with veteran Satoshi Motoyama challenging the series alongside young gun Katsumasa Chiyo.

Nissan’s new GT500 racer, which incorporates the distinctive design of the standard 2017 Nissan GT-R NISMO, was developed in compliance with the 2017 SUPER GT technical regulations and inherits the competitive and hard-charging spirit of previous incarnations of the Nissan GT-R NISMO GT500.

Officially revealed last November, the car has undergone testing in Japan as well as in Sepang, Malaysia. The updates will be made just before the opening round and are expected to result in an even stronger, more competitive GT-R that will build upon the previous championship winning car’s legacy of dominance within the history of motorsports.

Ford Created the Ford GT Supercar to Test Technologies for…

Nissan KICKS MY17‎: A Fresh Offering to the UAE’s…