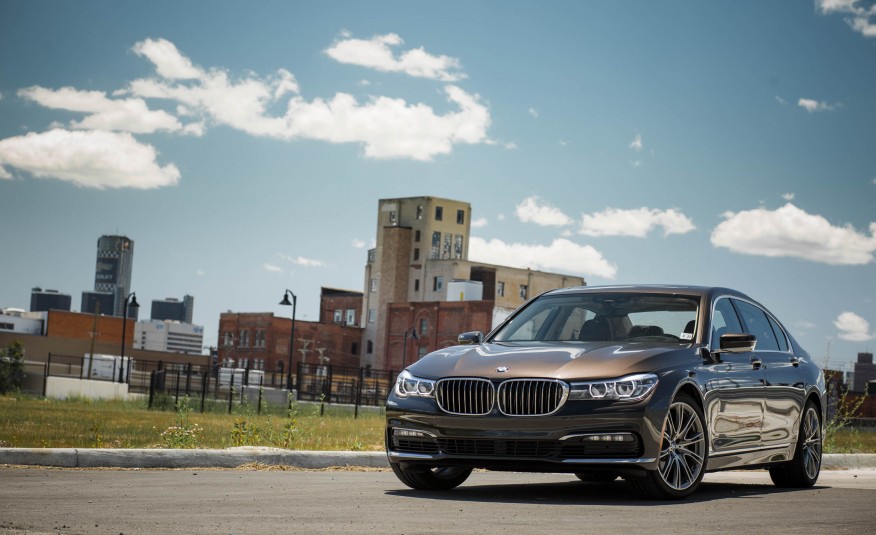 BMW’s quest to adapt the 3-series for mass-market appeal has watered down our decades-long love for the car that once combined control, practicality, and fun like no other. Instead of hunting for the ghosts of BMW past with yet another long-term 3-series, we’ve redirected our focus toward a 2016 BMW 740i. We’ll spend 40,000 miles determining if BMW’s apparent new priorities—luxury and comfort before sport—have been perfected in the company’s flagship.

The 7-series is less about driving and more about riding, and these days, that means a car packed with electronics. The sixth-generation 7-series takes the first baby steps toward automated highway driving with optional adaptive cruise control and brief stints of self-steering lane keeping. We assume that BMW designers also are fans of Minority Report because the latest iteration of iDrive allows passengers to wave a hand or twirl a finger in front of the 10.2-inch touchscreen to accept an incoming call or to adjust the audio volume. Yes, the gesture controls are every bit as gimmicky and imperfect as they sound. Looking beyond the silicon and semiconductors, this new G11 chassis blends high-strength steel, cast and extruded aluminium, carbon fibre, and magnesium for a lighter unitised structure. We’ve been conditioned to think of the 7-series as a six-figure car, so we impressed ourselves when we ordered our long-termer with a $96,095 price tag. It helped to start with the least expensive 7-series, an $82,295 rear-wheel-drive, six-cylinder 740i because from there we positively splurged on indulgences. The $3900 Luxury Seating package with Cold Weather brings heated, ventilated, and massaging power rear seats; a heated steering wheel; heated front and rear armrests; and a 7.0-inch Samsung tablet in the rear console that allows control of just about everything in the car except for the steering wheel and pedals. The $4100 Executive package adds power side-window shades, ventilated 20-way adjustable front seats, a head-up display, and ceramic trim for the shifter, the iDrive controller, and the radio.

We went for the $1900 Driver Assistance Plus package, which includes front-collision mitigation, lane-departure warning, speed-limit display, automatic parking, and blind-spot detection but is most notable for the included surround-view camera system with a 3D view. BMW uses four cameras to stitch together an image that looks as if your cinematographer is filming the car from 10 feet away, and you can pinch the air and wiggle your wrist to rotate around the car for different angles. The jury is still out on whether this is more useful than the bird’s-eye or traditional vantages (these are also selectable views in the 7-series), but this bit of tech feels less like a gimmick and more like something truly innovative. Notably, we skipped the Driver Assistance Plus II package that adds adaptive cruise control and active lane-keeping for $1700. We don’t expect to miss either feature much. Our drivers typically prefer traditional cruise control, and, based on experience, we know that the BMW’s steering assistant is merely a lane-keeping aid rather than a stand-in for two human hands. Sundries include $2600 for 20-inch wheels and $900 for a more massive panoramic glass roof with LED accent lighting. We also spent $250 for what we’ve taken to calling a “key goblet.” It features a tiny touchscreen that allows you to precondition the cabin and to check the status of the door locks or the windows. It was probably money we shouldn’t have spent. There’s a phone app that accomplishes the same thing, and the key is merely one more electronic gizmo to keep charged. Finally, we dropped $150 for a space-saver spare, which adds some additional security against being stranded, over and above the standard run-flat tires, but comes with the penalty of raising the trunk floor by about six inches.

We weren’t expecting sports-car moves, so we were surprised when the 320-hp six-cylinder made such light work of the burden it carries. At the track, the 4385-pound 740i reached 60 mph in only 4.8 seconds, and a panic stop from 70 mph required just 159 feet of roadway. The skidpad figure of 0.86 g qualifies as respectable, although not exactly impressive. Several logbook commenters have noted how soft the ride is, particularly in the car’s Comfort Plus mode. One staffer even compared the 740i to a Kia K900, a recent and unloved long-termer in our fleet. Bizarrely, that plush suspension tune doesn’t mean the ride is entirely comfortable. Our 7-series seems to be affected by a paradoxical chassis tuning in which the suspension doesn’t provide enough body control, but the wheel impacts are too harsh. Over sharp lateral features such as expansion joints, the 740i pounds and smacks the pavement. The run-flat tires likely don’t help, but we’ve never had this problem with a Mercedes-Benz S-class on run-flat rubber.

Despite the persistent drumbeat of complaints about the hard tires, the 740i is still an excellent way to cover significant mileage. Assistant buyer’s guide editor Annie White logged almost 2000 miles driving from Ann Arbor to Indiana, Virginia, North Carolina, Washington, D.C., and back to Michigan. “By far the most comfortable car I have ever road-tripped in,” she wrote. “I had no back pain at all—which is not normal for me—thanks to the truly excellent seats with seemingly endless adjustability.” The small-displacement engine also is delivering on its end of the bargain: In addition to the impressive track-test performance, we’re averaging 26 mpg through the first two months.