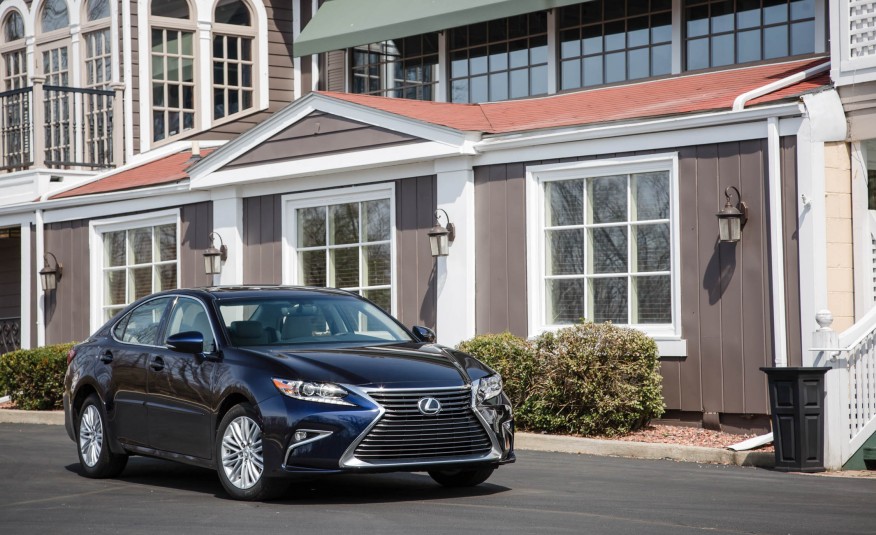 Not everyone likes to drive, feel the road through the seat of their pants, or hear the roar of an engine at full throttle, and the 2016 Lexus ES aims for that clientele. Quiet, comfortable, and spacious, the Lexus ES luxury sedan is available with either a surprisingly quick 268-hp 3.5-litre V-6 in the ES350 or an efficient 200-hp gasoline-electric hybrid powertrain in the ES300h.

The latter nets a 40-mpg EPA city rating and includes distinct visual touches such as blue badging, a lip spoiler on the trunk, and a hidden exhaust pipe. Whereas previous versions of the ES shared underpinnings with the mid-size Toyota Camry, the sixth generation, introduced for 2013, rides on the full-size Toyota Avalon’s longer wheelbase. As a result, rear-seat passengers enjoy 40.0 inches of legroom—a figure that (just barely) betters the new Buick LaCrosse and makes it among the best in the segment. Besides the LaCrosse, the ES competes against the likes of the Lincoln MKZ, as well as similarly priced, if slightly smaller, entry-luxury models such as the Acura TLX and the Volvo S60. For this review, we drove the conventionally powered Lexus ES350. 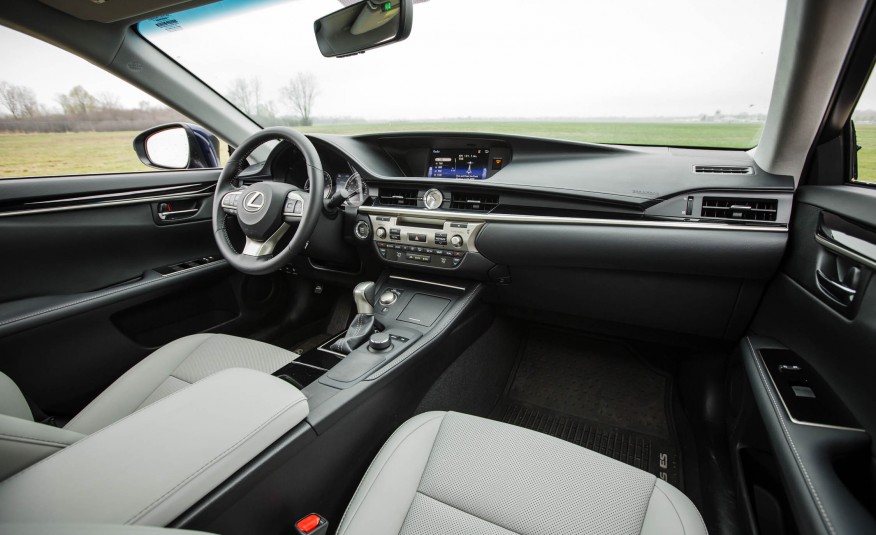 What’s New: Lexus lightly refreshed the ES’s exterior and interior for 2016. A bigger and bolder version of the brand’s ubiquitous spindle grille dominates the ES’s front end, while redesigned headlights, which now offer standard LED low-beams, add a hint of aggression to the car’s design.

Out back, new taillights and a revised fascia subtly alter the ES’s tail. Inside, updated finishes and a new shifter breathe a bit of new life into the ES’s cabin. Finally, a new optional safety package, dubbed Lexus Safety System +, brings with it a pre-collision warning system, lane-departure warning with steering assist, automatic high-beam headlights, and adaptive cruise control. 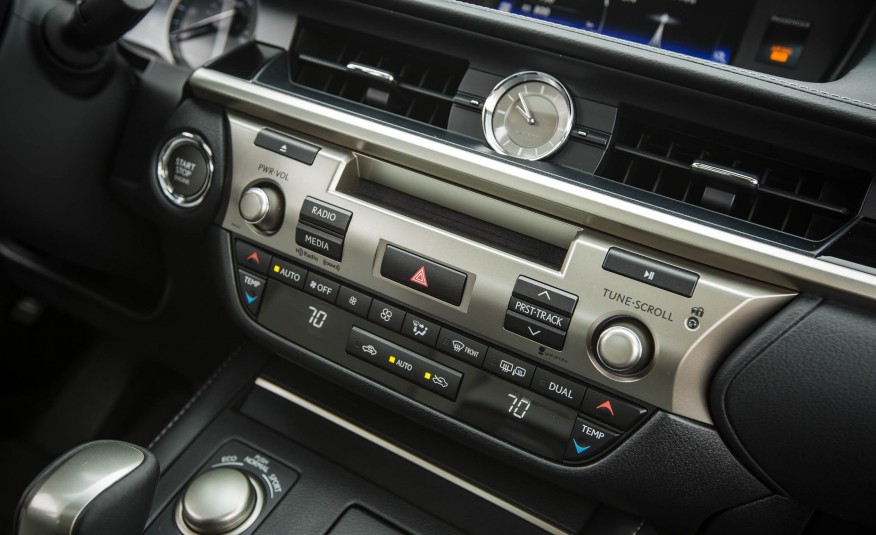 What We Like: Comfort is king in the Lexus ES. A soft suspension absorbs bumps and road imperfections with aplomb. Complementing the smooth ride are a quiet cabin and cushy seats, as well as enough rear-seat legroom to accommodate an NBA centre. Despite producing less horsepower than many competitors, the V-6 in the ES350 moves the luxury sedan with gusto, and the standard six-speed automatic transmission swaps cogs seamlessly. While the ES300h can’t match the ES350’s quick acceleration times, the hybrid’s EPA fuel-economy figures of 40 mpg city and 39 mpg highway trounce the V-6’s 21/31 mpg (city/highway) ratings. 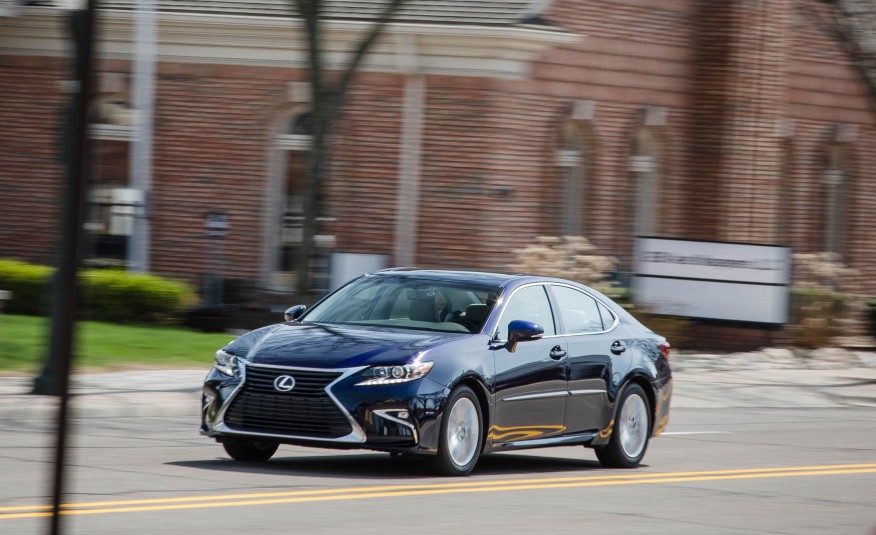 What We Don’t Like: In its effort to make the ES one of the plushest cars in its category, Lexus has removed any driver engagement from the ES, although that is a key to its success. Buyers accustomed to the power of six-cylinder luxury cars may be disappointed by the ES300h hybrid’s performance. When we tested a 2013 ES300h, we got a zero-to-60-mph time of 7.7 seconds. With Lexus quoting a 60-mph sprint time of 8.1 seconds for the 2016 model, the pace of acceleration is best described as “leisurely.” For comparison, we clocked a 2015 Lexus ES350 sprinting to 60 mph in 5.8 seconds. Making matters worse, the ES300h loses three cubic feet of cargo space to the hybrid system’s battery pack. At 12 cubic feet, the hybrid’s trunk is smaller than that of the compact Mercedes-Benz CLA-class. 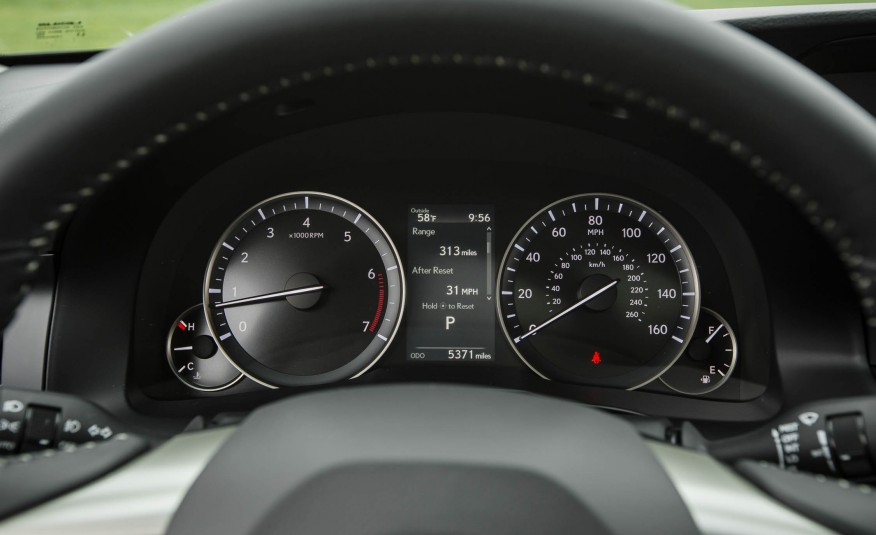 Verdict: The perfect car for those who prize comfort and serenity over driving engagement.